Lama Temple. This exceptional temple is a glittering attraction in Běijīng’s Buddhist firmament. 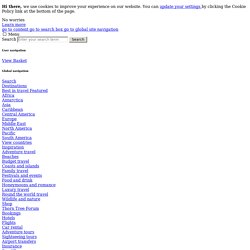 If you only have time for one temple (the Temple of Heaven isn’t really a temple) make it this one, where riveting roofs, fabulous frescoes, magnificent decorative arches, tapestries, eye-popping carpentry, Tibetan prayer wheels, Tantric statues and a superb pair of Chinese lions mingle with dense clouds of incense. The most renowned Tibetan Buddhist temple outside Tibet, the Lama Temple was converted to a lamasery in 1744 after serving as the former residence of Emperor Yong Zheng. Today the temple is an active place of worship, attracting pilgrims from afar, some of whom prostrate themselves in submission at full length within its halls. The fifth hall, the Wànfú Pavilion (Wànfú Gé), houses a magnificent 18m-high statue of the Maitreya Buddha in his Tibetan form, clothed in yellow satin and reputedly sculpted from a single block of sandalwood. Tiān’ānmén Square. Flanked by stern 1950s Soviet-style buildings and ringed by white perimeter fences, the world’s largest public square (440,000 sq metres) is an immense flatland of paving stones at the heart of Běijīng. 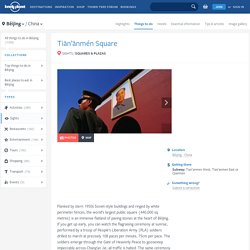 If you get up early, you can watch the flagraising ceremony at sunrise, performed by a troop of People’s Liberation Army (PLA) soldiers drilled to march at precisely 108 paces per minute, 75cm per pace. The soldiers emerge through the Gate of Heavenly Peace to goosestep impeccably across Chang’an Jie; all traffic is halted. The same ceremony in reverse is performed at sunset. Temple of Heaven Park. A tranquil oasis of peace and methodical Confucian design in one of China’s busiest urban landscapes, the 267-hectare Temple of Heaven Park is absolutely unique. 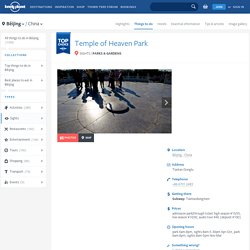 It originally served as a vast stage for solemn rites performed by the emperor of the time (known as the Son of Heaven), who prayed here for good harvests and sought divine clearance and atonement. Strictly speaking, it's an altar rather than a temple – so don’t expect burning incense or worshippers. Surrounded by a long wall and with a gate at each compass point, the arrangement is typical of Chinese parks, with the imperfections, bumps and wild irregularities of nature largely deleted and the harmonising hand of man accentuated in obsessively straight lines and regular arrangements. This effect is magnified by Confucian objectives, where the human intellect is imposed on the natural world, fashioning order and symmetry.

The resulting balance and harmony have an almost haunting – but slightly claustrophobic – beauty. Forbidden City. Ringed by a 52m-wide moat at the very heart of Běijīng, the Forbidden City is China’s largest and best-preserved collection of ancient buildings, and the largest palace complex in the world. 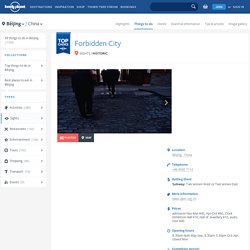 So called because it was off limits for 500 years, when it was steeped in stultifying ritual and Byzantine regal protocol, the otherworldly palace was the reclusive home to two dynasties of imperial rule until the Republic overthrew the last Qing emperor. Today, the Forbidden City is prosaically known as the Palace Museum (故宫博物馆; Gùgōng Bówùguǎn), although most Chinese people simply call it Gù Gōng (故宫; ancient palace).

In former ages the price for uninvited admission was instant execution; these days ¥40 or ¥60 will do. Allow yourself the best part of a day for exploration or several trips if you’re an enthusiast. Guides – many with mechanical English – mill about the entrance, but the automatically activated audio tours are cheaper (¥40; more than 40 languages) and more reliable. Entrance. Summer Palace. As mandatory a Běijīng sight as the Great Wall or the Forbidden City, the Summer Palace was the playground for emperors fleeing the suffocating summer torpor of the old imperial city. 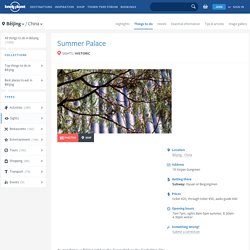 A marvel of design, the palace – with its huge lake and hilltop views – offers a pastoral escape into the landscapes of traditional Chinese painting. It merits an entire day’s exploration, although a (high-paced) morning or afternoon exploring the temples, gardens, pavilions, bridges and corridors may suffice. The domain had long been a royal garden before being considerably enlarged and embellished by Emperor Qianlong in the 18th century.