Top 30 Classic TV Dramas in China: The Best Chinese Series of All Time. First published November 16 2018 China Standard Time They might have aired 30 years ago, but some TV dramas just never get old. 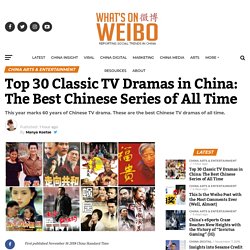 We have listed the greatest classic Chinese TV dramas of all time, that, either because of their high-production value or historic ratings, are still talked about today. People’s Daily: Stay away from the opium of demotivational culture. Sex and the (Forbidden) City: Concubine Drama Becomes Smash Hit in the #MeToo Era. This PUBG-Style Commercial From Food Delivery Firm Meituan is Pretty Wild. China’s computer games companies might be struggling a bit at the moment, as an apparent halt in approvals for new titles by the industry’s regulatory body here causes stock prices to slide, but gaming is still big business — and not just for console makers and game producers. 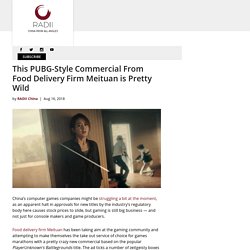 Food delivery firm Meituan has been taking aim at the gaming community and attempting to make themselves the take out service of choice for games marathons with a pretty crazy new commercial based on the popular PlayerUnknown’s Battlegrounds title. What two films reveal about China - Cinema and censorship. Durex college exam joke does not impress Shanghai newspaper. Durex China is a master of digital marketing: Have a look at its Weibo account to see how the company integrates trending topics into witty posts about its condoms (in Chinese). 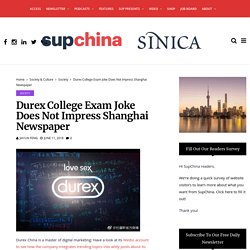 Durex reportedly has a 45 percent market share in China, where talking about sex in public still remains far from common. While Durex’s edgy online marketing campaigns are popular among internet users, one recent Weibo post annoyed a Shanghai newspaper: The condom company made a joke connected to the college entrance examination, or gaokao. On June 5 — one day before this year’s three-day gaokao session began — Durex posted the photo below. It resembles the top of a gaokao answer sheet with a list of items for test takers to pay attention to. They are mostly double entendres. While most internet users were, as usual, impressed by the brand’s creativity, the Shanghai Morning Post 新闻晨报 published a commentary (in Chinese) on June 7, criticizing Durex for vulgarity and for targeting teenagers. Meet rural China’s viral online celebrities - SupChina. While short videos have become a craze in China, it wasn’t until recently that I embraced this guilty pleasure: watching homemade skits on Kuaishou 快手, one of the China largest video platforms, branded as “Kwai” in international markets. 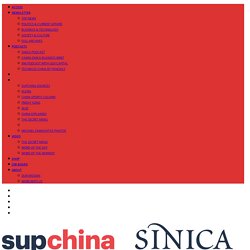 Like many observers of the Chinese tech scene, I downloaded Kuaishou a month ago merely trying to understand its popularity. The app, launched in 2011, recently received $1 billion from Tencent. But as I poked around, it soon became evident to me that Kuaishou is more than a simple video platform in the same vein as Meipai, where one can look at the country’s prettiest star-chasing girls obsessed with Meitu, or a generic live-streaming app such as Huajiao. Young Style 青春派中英双字. Friday Song: The jazz and hip-hop of Dabozz - SupChina. Kuora: When it comes to cultural influence, the U.S. is soundly ahead of China - SupChina.

Some Americans, like FBI director Christopher Wray, have been wringing their hands about the perceived encroachment of Chinese influence in the U.S. 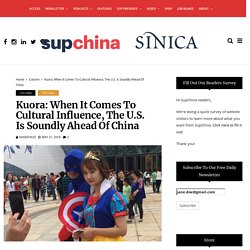 (Wray goes so far as to warn of “espionage” in academia). But what exactly does the U.S. have to be afraid of? Perhaps it would be instructive to look at the other side of the coin: the effect of American influence in China, and how much more pronounced — “successful” — it has been. (Let this also be an opportunity to remember that governments everywhere are all probably a bit more paranoid than they should be.)

This week’s column is taken from separate answers, originally posted to Quora on April 6, 2016 — How much truth is there to Beijing’s claims that the West is trying to impose “peaceful evolution” on China? — and November 10, 2017: Xinjiang: Uighur Pop Singer Ablajan Awut Ayup Eyes Greater Fame. Sangzhu is not the sort of place you’d expect to find a pop star. 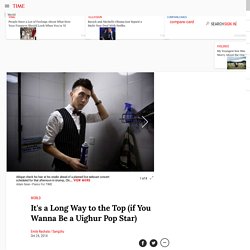 An oasis town of some 30,000 people off the old Silk Road in China’s northwestern Xinjiang region, Sangzhu is home to ethnic Uighur farmers, mosques and a bazaar. Women move quietly through courtyards, pulling their kerchiefs tight against the wind from the Taklamakan Desert. Bearded men lead donkeys down the road. Then a bus rattles around the corner, shaking sleepy Sangzhu to life. From the backseats of the rusty clunker comes the kind of feral scream that can only be produced by wild packs of teenage girls. Marvel's "Avengers: Infinity War" set to smash China’s box-office records. Keep calm and be average: China's unambitious 'Buddhist Youth', East Asia News & Top Stories - The Straits Times.

BEIJING (AFP) - While their country's leader has encouraged citizens to work harder and dream big, some Chinese millennials are declaring their allegiance to the art of being average. 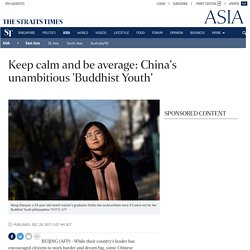 Nicknamed "Buddhist Youth", these young people have embraced a laissez-faire approach to life which has more to do with being chilled out than reading sutras. "Life is quite tiring," said 23-year-old Guo Jia, who believes being a Buddhist Youth means "accepting the things you cannot change and going with the flow". As a viral Chinese social media post outlined this month, behaviours associated with the largely irreligious Buddhist Youth include eating the same food every day, allowing one's romantic partner to make all the decisions and being devoid of strong feelings about virtually everything.