0015 Understand the properties and structure of matter.

The Chemical Basis for Life. Radioactivity. Ionic and Covalent Bonds. There are many types of chemical bonds and forces that bind molecules together. 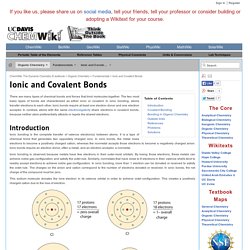 The two most basic types of bonds are characterized as either ionic or covalent. In ionic bonding, atoms transfer electrons to each other. Ionic bonds require at least one electron donor and one electron acceptor. In contrast, atoms with the same electronegativity share electrons in covalent bonds, because neither atom preferentially attracts or repels the shared electrons. Introduction Ionic bonding is the complete transfer of valence electron(s) between atoms. Ionic bonding is observed because metals have few electrons in their outer-most orbitals. This sodium molecule donates the lone electron in its valence orbital in order to achieve octet configuration.

This chlorine atom receives one electron to achieve its octet configuration, which creates a negatively charged anion. Covalent Bonding. Metallic Bonding. Metals have several qualities that are unique, such as the ability to conduct electricity, a low ionization energy, and a low electronegativity (so they will give up electrons easily, i.e., they are cations). 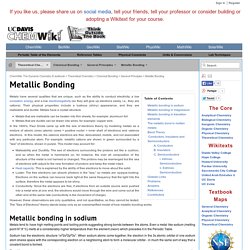 Their physical properties include a lustrous (shiny) appearance, and they are malleable and ductile. Metals have a crystal structure. Metals that are malleable can be beaten into thin sheets, for example: aluminum foil. Metals that are ductile can be drawn into wires, for example: copper wire. In the 1900's, Paul Drüde came up with the sea of electrons theory by modeling metals as a mixture of atomic cores (atomic cores = positive nuclei + inner shell of electrons) and valence electrons. Metallic Character. Metallic character decreases as you move across the periodic table from left to right. 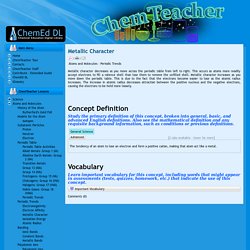 This occurs as atoms more readily accept electrons to fill a valence shell than lose them to remove the unfilled shell. Metallic character increases as you move down the periodic table. This is due to the fact that the electrons become easier to lose as the atomic radius increases. Untitled. Ionization energy is the quantity of energy that an isolated, gaseous atom in the ground electronic state must absorb to discharge an electron, resulting in a cation. 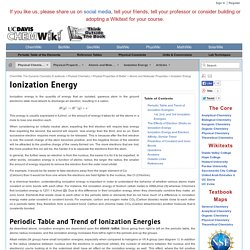 This energy is usually expressed in kJ/mol, or the amount of energy it takes for all the atoms in a mole to lose one electron each. When considering an initially neutral atom, expelling the first electron will require less energy than expelling the second, the second will require less energy than the third, and so on. Each successive electron requires more energy to be released. Periodic Properties of the Elements. The elements in the periodic table are arranged in order of increasing atomic number. 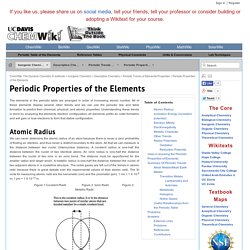 All of these elements display several other trends and we can use the periodic law and table formation to predict their chemical, physical, and atomic properties. Understanding these trends is done by analyzing the elements electron configuration; all elements prefer an octet formation and will gain or lose electrons to form that stable configuration. Atomic Radius We can never determine the atomic radius of an atom because there is never a zero probability of finding an electron, and thus never a distinct boundary to the atom.

All that we can measure is the distance between two nuclei (internuclear distance). Figure 1:Covalent Radii Figure 2: Ionic Radii Figure 3: Metallic Radii. Atoms: Orbitals. As you know, electrons are always moving. 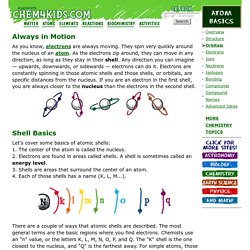 They spin very quickly around the nucleus of an atom. As the electrons zip around, they can move in any direction, as long as they stay in their shell. Any direction you can imagine — upwards, downwards, or sidewards — electrons can do it. Visualizing Electron Orbitals. Rough sketches of the electron density for the first three shells of the hydrogen atom can give an impression of the constraints that govern the buildup of the periodic table. 0708 periodic table. States of Matter. Interaction. Kinetic theory. Kinetic theory. Gases, Liquids, and Solids. Atoms In Motion - Atoms In Motion. Subatomic Particles - body, used, Earth, life, type, chemical, form, energy, carbon, waves, basic, change, The quark model, Five important subatomic particles. Photo by: Patrick Hermans Subatomic particles are particles that are smaller than an atom. 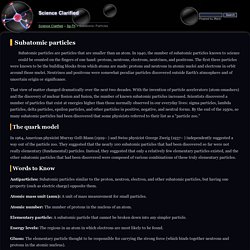 In 1940, the number of subatomic particles known to science could be counted on the fingers of one hand: protons, neutrons, electrons, neutrinos, and positrons. The first three particles were known to be the building blocks from which atoms are made: protons and neutrons in atomic nuclei and electrons in orbit around those nuclei. Neutrinos and positrons were somewhat peculiar particles discovered outside Earth's atmosphere and of uncertain origin or significance. That view of matter changed dramatically over the next two decades. Atoms: Structure. Atoms are the foundation of chemistry. 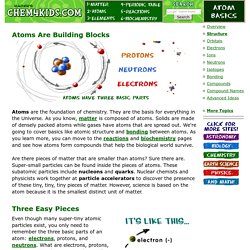 They are the basis for everything in the Universe. As you know, matter is composed of atoms. Solids are made of densely packed atoms while gases have atoms that are spread out. We're going to cover basics like atomic structure and bonding between atoms. Chromatography1.pdf. Distillation. Distillation, the separation of one substance from another by evaporation and condensation. 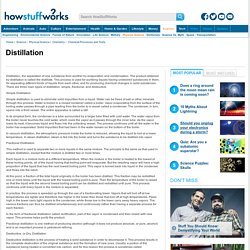 The product obtained by distillation is called the distillate. This process is used for purifying liquids having undesired substances in them, for separating different kinds of liquids from each other, and for producing chemical changes in solid substances. There are three main types of distillation: simple, fractional, and destructive. Simple Distillation Simple distillation is used to eliminate solid impurities from a liquid. Matter good powerpoint. Pure Substances, Mixtures and Solutions. CH105: Lesson 3 Solubility Limits. So far in this lesson we have described materials as being soluble, slightly soluble, or insoluble in water. 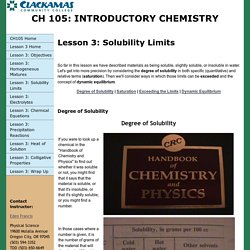 Let's get into more precision by considering the degree of solubility in both specific (quantitative) and relative terms (saturation). Then we'll consider ways in which those limits can be exceeded and the concept of dynamic equilibrium. Degree of Solubility | Saturation | Exceeding the Limits | Dynamic Equilibrium Degree of Solubility Top of page Saturation These values for degree of solubility (usually just referred to as solubility) refer to the limit of how much solute will dissolve in a certain amount of water at a certain temperature. A solution which is below that limit is called an unsaturated solution. Kids science: Melting and Boiling. Science >> Chemistry for Kids As we learned in solids, liquids, and gases all matter exists in certain states or phases.

Water can be liquid water, solid ice, or gas vapor. It's still all water, however, and made up of molecules of 2 hydrogen atoms and 1 oxygen atom (H2O). Lava is melted or liquid rock Melting and Freezing When a solid turns into a liquid it is called melting. When the opposite happens and a liquid turns into a solid, it is called freezing. GCSE SCIENCE CHEMISTRY HIGH SCHOOL - What is Concentration - Moles - Calculating the Concentrations of Solutions - Titration - Sodium Hydroxide - Hydrochloric Acid - gcsescience.com. Mass Volume Density.