Combinazioni colori. Vhue - Color Palettes, Moodboards, Design Inspiration & Industry Trends. Who needs a mood board? from the Course Developing a Mood Board. Apple Industrial Design Group. The Apple Industrial Design Group (IDg) is the industrial design arm of Apple Inc. responsible for crafting the appearance of all Apple products, including the Apple Macintosh computer line. 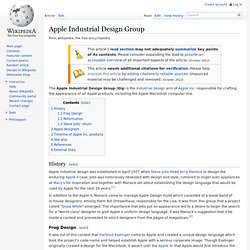 History[edit] Apple industrial design was established in April 1977 when Steve Jobs hired Jerry Manock to design the enduring Apple II case. Jobs was notoriously obsessed with design and style, rumored to linger over appliances at Macy's for inspiration and together with Manock set about establishing the design language that would be used by Apple for the next 10 years.[1] In addition to the Apple II, Manock came to manage Apple Design Guild which consisted of a loose band of in-house designers, among them Bill Dresselhaus, responsible for the Lisa.

It was from this group that a project called "Snow White" emerged. Frog Design[edit] The original Macintosh was designed by Jerry Manock and Terry Oyama with ample guidance from Steve Jobs. Reformation[edit] Steve Jobs' return[edit] How Apple reinvented the laptop. The Evolution of Apple Design Between 1977-2008. With the 25th anniversary of the first Macintosh computer coming up on January 24th, 2009, we’re taking a look back in time at the evolution of Apple products. 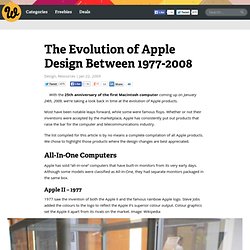 Most have been notable leaps forward, while some were famous flops. Whether or not their inventions were accepted by the marketplace, Apple has consistently put out products that raise the bar for the computer and telecommunications industry. The list compiled for this article is by no means a complete compilation of all Apple products. We chose to highlight those products where the design changes are best appreciated.

All-In-One Computers Apple has sold “all-in-one” computers that have built-in monitors from its very early days. Consistency in Apple's Design Language. Kobara Design - Design Strategy. In the 1990's most products at HP looked as though they all came from different companies. In 1999, I was tasked with developing a design language that would define the overall look and feel of all products in the "new" HP. The goal was to put in place an agreement and adherence to a design direction that every product division would adhere to. The end result was to ensure that all products coming out of HP would be perceived to have the same DNA while allowing each product to be designed to its own purpose and requirements.

Educational design language. This article or section is incomplete and its contents need further attention. 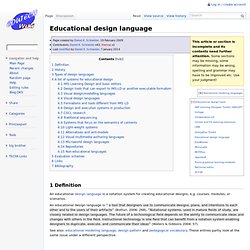 See also: educational modeling language, design pattern and pedagogical vocabulary. 2 History Daniel K. Implicit design languages also were defined by authoring environments and that culminated in systems like (the now dead) Authorware that supported a visual design/programming environment. His book defines a written notation, but also used flow diagrams. The rest of his model concerns management of different kinds of answers, i.e. Report: Audi reworking its design language for the near future. CARandDRIVER briefly reports that Audi is already in the works with revamping their entire design language, after hearing from “internal sources.” 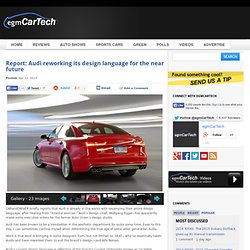 Audi’s design chief, Wolfgang Egger, has apparently made some executive orders for the former Auto Union’s design studio. Audi has been known to be a trendsetter in the aesthetic department for quite some time. Even to this day, I can sometimes confuse myself when determining the true age of some older generation Audis. Word is that Audi is bringing in some designers from, but not limited to, SEAT—who’ve essentially taken Audis and have reworked them to suit the brand’s design—and Alfa Romeo. Audi’s current design language is reflective of the brand’s current philosophy known as “scalable design,” which has also influenced Audi’s use of single modular platforms that underpin nearly the entire brand’s lineup. So what does that mean for us? - By: Chris Chin Source: CARandDRIVER. Anchoring Your Design Language in a Live Style Guide. Harmonizing UX design and agile development is possible, but it takes some work. 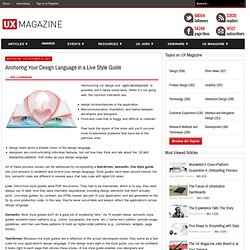 When it’s not going well, the common indicators are: design inconsistencies in the applicationMiscommunication, frustration, and blame between developers and designersFront-end code that is buggy and difficult to maintain Peel back the layers of the onion and you’ll uncover more fundamental problems that have led to the previous ones: Mazda Australia Zoom-Zoom - KODO Design Language. Snow White design language. The Microsoft design language. Design language. A design language or design vocabulary is an overarching scheme or style that guides the design of a complement of products or architectural settings. 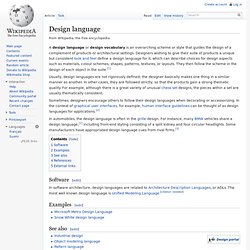 Designers wishing to give their suite of products a unique but consistent look and feel define a design language for it, which can describe choices for design aspects such as materials, colour schemes, shapes, patterns, textures, or layouts. They then follow the scheme in the design of each object in the suite.[1] Usually, design languages are not rigorously defined; the designer basically makes one thing in a similar manner as another. In other cases, they are followed strictly, so that the products gain a strong thematic quality. For example, although there is a great variety of unusual chess set designs, the pieces within a set are usually thematically consistent. Sometimes, designers encourage others to follow their design languages when decorating or accessorizing.