Institution of Mechanical Engineers. Feeding the 9 Billion: The tragedy of waste By 2075, the United Nations’ mid-range projection for global population growth predicts that human numbers will peak at about 9.5 billion people. 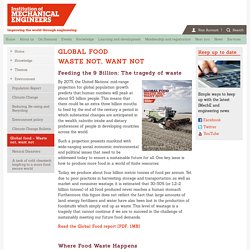 This means that there could be an extra three billion mouths to feed by the end of the century, a period in which substantial changes are anticipated in the wealth, calorific intake and dietary preferences of people in developing countries across the world. Such a projection presents mankind with wide-ranging social, economic, environmental and political issues that need to be addressed today to ensure a sustainable future for all. One key issue is how to produce more food in a world of finite resources. Today, we produce about four billion metric tonnes of food per annum. Read the Global Food report [PDF, 1MB] Where Food Waste Happens. Food versus Fuel: Toward a New Paradigm—The Need for a Holistic Approach. Lessons from first generation biofuels and implications for the sustainability appraisal of second generation biofuels.

Author's personal copy Thus we do not aim to map all the relevant sustainability challengesfor biofuels this has already been attempted by other authors(e.g., Markevi ĉ ius et al., 2010; Thornley and Gilbert, 2013). 3. 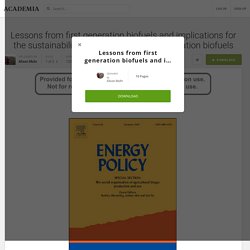 Our analysis suggests that sustainability issues identi ed inrelation to 1G are potentially relevant to 2G, and may becomemore prominent should 2G technologies be commercialised. Cationof agriculture implicates the production of residues as well as thecrop). Food vs. fuel con icts. 3.1. As earlyas 1991, Hall (1991: 733) noted that the food vs. fuel issueis far more complex than has been presented in the past and onewhich needs careful examination, since agricultural and exportpolicies and the politicisation of food availability are greater deter-mining factors . Eld Council on Bioethics (2011) notes that forevery reportorstatement of a causal link between the 2007-08 spikes and biofuels,others provide rebuttals. Ict with food production. Ict. Publication: Technology Roadmap: Biofuels for Transport. 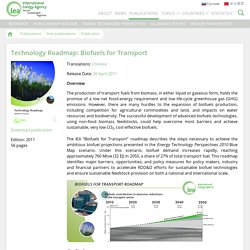 However, there are many hurdles to the expansion of biofuels production, including competition for agricultural commodities and land, and impacts on water resources and biodiversity. The successful development of advanced biofuels technologies, using non-food biomass feedstocks, could help overcome most barriers and achieve sustainable, very low CO2, cost-effective biofuels. The IEA “Biofuels for Transport” roadmap describes the steps necessary to achieve the ambitious biofuel projections presented in the Energy Technology Perspectives 2010 Blue Map scenario. Key Findings. Microbial conversion of pyrolytic products to biofuels: a novel and sustainable approach toward second-generation biofuels. Sustainability criteria. Skip to main content Current language: en Energy Energy > European Commission > Energy > Topics > Renewable energy > Biofuels > Sustainability criteria Sustainability criteria Login The EU has defined a set of sustainability criteria to ensure that the use of biofuels (used in transport) and bioliquids (used for electricity and heating) is done in a way that guarantees real carbon savings and protects biodiversity. 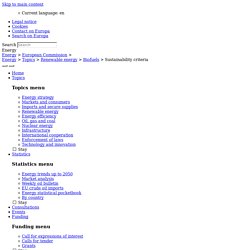 The main criteria To be considered sustainable, biofuels must achieve greenhouse gas savings of at least 35% in comparison to fossil fuels. Annotated example of a GHG calculation Annotated example of a land carbon stock calculation Inventory of data sources and methodologies to help identify land status Application of the sustainability criteria to the harvest of 2010 Related legislation Share this page Follow us Contact Press releases and speechesNewsletters Subscribe to newsletter Other sites. Biofuels Issues and Trends. Release date: October 15, 2012 (updated October 18, 2012 for cellulosic production and October 23, 2012 for RSF2 volume clarification) Biofuels is a collective term for liquid fuels derived from renewable sources, including ethanol, biodiesel, and other renewable liquid fuels. 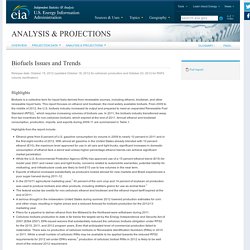 This report focuses on ethanol and biodiesel, the most widely available biofuels. From 2009 to the middle of 2012, the U.S. biofuels industry increased its output and prepared to meet an expanded Renewable Fuel Standard (RFS2),1 which requires increasing volumes of biofuels use. Sugarcane expansion in Brazilian tropical soils—Effects of land use change on soil chemical attributes. 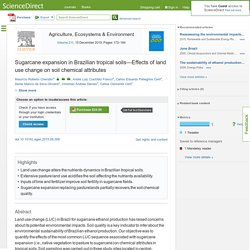 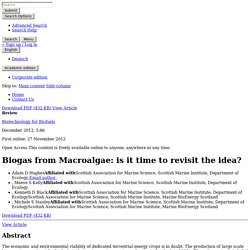 The production of large scale biomass (macroalgae) for biofuels in the marine environment was first tested in the late 1960’s. The culture attempts failed due to the engineering challenges of farming offshore. However the energy conversion via anaerobic digestion was successful as the biochemical composition of macroalgae makes it an ideal feedstock. The technology for the mass production of macroalgae has developed principally in China and Asia over the last 50 years to such a degree that it is now the single largest product of aquaculture.