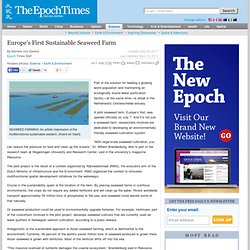 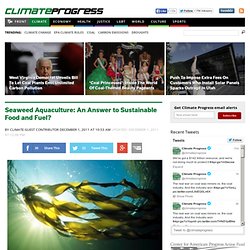 " by Cole Mellino When copying the model of land-based industrialized farming, current aquaculture practices can have many of the same negative environmental impacts inherent in industrial-scale agriculture. U.S. aquaculture operations, primarily producing shellfish, are subject to stringent environmental regulations. But due to the poorly regulated use of high amounts of chemicals and antibiotics to maintain massive, centralized monocultures of fish and shrimp particularly in South America and southeast Asia, aquaculture farms have gained a reputation for polluting water and producing poor-quality food. But it doesn’t have to be this way. Unsurprisingly, once information got out among the general public, “aquaculture” quickly became a dirty word. Organic Industrial Agriculture. Definition To begin to classify modern agriculture, it is imperative to first consider two important categories that have been established in society regarding farming techniques: industrial and organic. 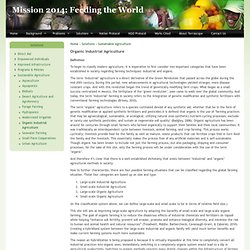 The term "industrial" agriculture is a direct derivative of the Green Revolution that passed across the globe during the mid-20th century. During this period, new advancements in agricultural technologies yielded stronger, more disease-resistant crops. And with this revolution began the trend of genetically modifying farm crops. What began as a small success centralized in Mexico, the birthplace of the "green revolution", soon came to wash over the global community.

And therefore it’s clear that there is a well-established dichotomy that exists between "industrial" and "organic" agricultural methods in society. Now to further characterize, there are four possible farming situations that can be classified regarding the global farming situation. Pros and Cons. The World Future Council: Organic Farming Solutions. Agricultural carbon sequestration has the potential to substantially mitigate global warming impacts. 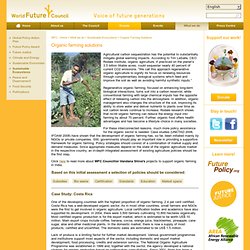 According to Tim LaSalle, CEO Rodale Institute, organic agriculture, if practiced on the planet’s 3.5 billion tillable acres, could sequester nearly 40 percent of current CO2 emissions. “We call this approach regenerative organic agriculture to signify its focus on renewing resources through complementary biological systems which feed and improve the soil as well as avoiding harmful synthetic inputs.” Regenerative organic farming, focused on enhancing long-term biological interactions, turns soil into a carbon reservoir, while conventional farming with large chemical imputs has the opposite effect of releasing carbon into the atmosphere. 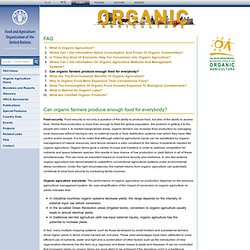 Food security is not only a question of the ability to produce food, but also of the ability to access food. Global food production is more than enough to feed the global population, the problem is getting it to the people who need it. In market-marginalized areas, organic farmers can increase food production by managing local resources without having to rely on external inputs or food distribution systems over which they have little control and/or access. It is to be noted that although external agricultural inputs can be substituted by organic management of natural resources, land tenure remains a main constraint to the labour investments needed for organic agriculture. Organic farms grow a variety of crops and livestock in order to optimize competition for nutrients and space between species: this results in less chance of low production or yield failure in all of these simultaneously.

Organic agriculture and yields. The limits of a Green Revolution? In the second of his series, BBC World Affairs Correspondent Mark Doyle analyses the state of food production across the globe. 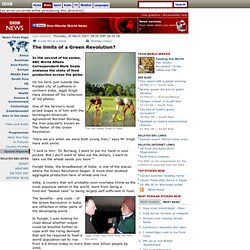 On his farm just outside the Punjabi city of Ludhiana in northern India, Jagjit Singh Hara showed off his collection of old photos. Dc8aefda-bc49-4246-9e92-9026bc0eed04-africas_turn. Food and Agriculture Organization of the United Nations. FAO's role in quinoa Like the potato, quinoa was one of the main foods of the Andean peoples before the Incas. 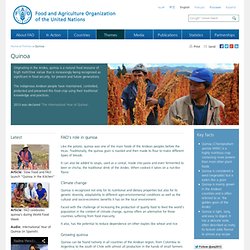 Traditionally, the quinoa grain is roasted and then made to flour to make different types of breads. It can also be added to soups, used as a cereal, made into pasta and even fermented to beer or chicha, the traditional drink of the Andes. When cooked it takes on a nut-like flavor. Climate change Quinoa is recognized not only for its nutritional and dietary properties but also for its genetic diversity, adaptability to different agro-environmental conditions as well as the cultural and socio-economic benefits it has on the local environment. 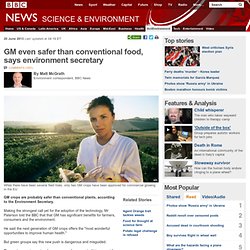