We are the Matheran visitor guider, providing all information regarding matheran like where to visit in matheran, where to stay, what to eat etc.

Matheran Hill Station : At Matheran Toy train, deep Forest, Red Mud, Monkeys & Horses but no cars!! Contact Us. Facts and Figures of Matheran. Hotels. As we know selection of stay place at any picnic spot is a crucial part of picnic. 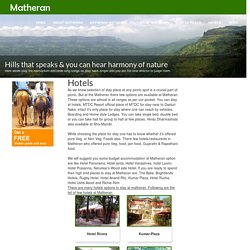 But at the Matheran there few options are available at Matheran. These options are almost in all ranges as per our pocket. You can stay at hotels, MTDC Resort official place of MTDC for stay near to Dasturi Naka, infact it’s only place for stay where one can reach by vehicles. Boarding and Home style Lodges. You can take single bed, double bed or you can take hall for group to halt at few places. We will suggest you some budget accommodation at Matheran option are like Hotel Panorama, Hotel janta, Hotel Vanashree, hotel Laxmi, Hotel Prasanna, Nerurkar’s Wood side Hotel. Transport and Communication. What to Buy at Matheran. Matheran Toy train journey in the monsoon.

Nature of Matheran. At Matheran you will be relax, Rested and Rejuvenating. 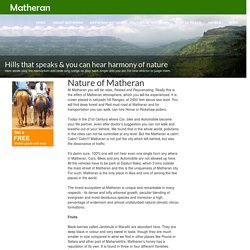 Really this is the effect of Matheran atmosphere, which you will be experienced. It is crown placed in sahyadri hill Ranges, at 2400 feet above sea level. You will find deep forest and Red mud road at Matheran and for transportation you can walk, can hire Horse or Rickshaw pullers. Today in the 21st Century where Car, bike and Automobile became your life partner, even after doctor’s suggestion you can not walk and breathe out of your Vehicle.

We found that in the whole world, pollutions in the cities can not be controlled at any level. It’s damn sure, 100% one will not hear even one single horn any where in Matheran. The forest ecosystem at Matheran is unique and remarkable in many respects - its dense and lofty arboreal growth, peculiar blending of evergreen and moist deciduous species and moreover a high percentage of endemism and almost undisturbed natural climatic climax formations. Fruits Trees Birds. How To Go There. The name of this hill station refers to the dense growth of jungle as its head. 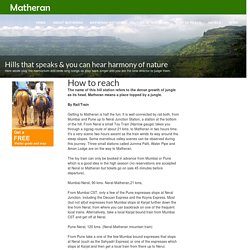 Matheran means a place topped by a jungle. By Rail/Train Getting to Matheran is half the fun; It is well connected by rail both, from Mumbai and Pune up to Neral Junction Station, a station at the bottom of the hill. From Neral a small Toy Train (Narrow gauge) takes you through a zigzag route of about 21 kms. to Matheran in two hours time. It's a very scenic two hours ascent as the train winds its way around the steep slopes. The toy train can only be booked in advance from Mumbai or Pune which is a good idea in the high season (no reservations are accepted at Neral or Matheran but tickets go on sale 45 minutes before departure).

Mumbai-Neral, 90 kms. From Mumbai CST, only a few of the Pune expresses stops at Neral Junction, including the Deccan Express and the Koyna Express. Pune-Neral, 120 kms. By Road From Mumbai Mumbai-Neral-Matheran, 108 kms. Nature of Matheran. About Matheran. In city life we stay & travel in cement jungle. 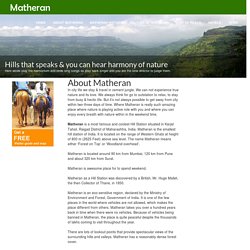 We can not experience true nature and its love. We always think for go to outstation to relax, to stay from busy & hectic life. But it’s not always possible to get away from city within two-three days of time. Where Matheran is really such amazing place where nature is playing active role with you and where you can enjoy every breath with nature within in the weekend time.

Matheran is a most famous and coolest Hill Station situated in Karjat Tahsil, Raigad District of Maharashtra, India. Matheran is located around 90 km from Mumbai, 120 km from Pune and about 320 km from Surat. Matheran is awesome place for to spend weekend. Matheran as a Hill Station was discovered by a British, Mr. Matheran is an eco-sensitive region, declared by the Ministry of Environment and Forest, Government of India. There are lots of lookout points that provide spectacular views of the surrounding hills and valleys. Matheran Hill Station : At Matheran Toy train, deep Forest, Red Mud, Monkeys & Horses but no cars!!