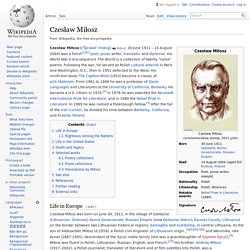 His World War II-era sequence The World is a collection of twenty "naïve" poems. Following the war, he served as Polish cultural attaché in Paris and Washington, D.C., then in 1951 defected to the West. His nonfiction book The Captive Mind (1953) became a classic of anti-Stalinism. From 1961 to 1998 he was a professor of Slavic Languages and Literatures at the University of California, Berkeley. He became a U.S. citizen in 1970.[3] In 1978 he was awarded the Neustadt International Prize for Literature, and in 1980 the Nobel Prize in Literature. Life in Europe[edit] Czeslaw Milosz - Poetry Foundation. Czeslaw Milosz ranks among the most respected figures in twentieth-century Polish literature, as well as one of the most respected contemporary poets in the world: he was awarded the Nobel Prize for Literature in 1980. 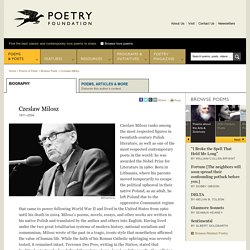 Born in Lithuania, where his parents moved temporarily to escape the political upheaval in their native Poland, as an adult, he left Poland due to the oppressive Communist regime that came to power following World War II and lived in the United States from 1960 until his death in 2004. Milosz’s poems, novels, essays, and other works are written in his native Polish and translated by the author and others into English. Having lived under the two great totalitarian systems of modern history, national socialism and communism, Milosz wrote of the past in a tragic, ironic style that nonetheless affirmed the value of human life.

While the faith of his Roman Catholic upbringing was severely tested, it remained intact. Czeslaw Milosz - Czeslaw Milosz Poems. Czesław Miłosz. I understood more or less an order or an appeal in an unearthly tongue:day draws near another one do what you can. 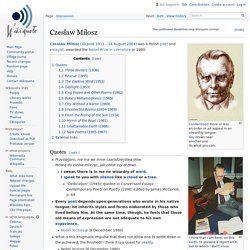 I think that I am here, on this earth, to present a report on it, but to whom I don't know. Czesław Miłosz (30 June 1911 – 14 August 2004) was a Polish poet and essayist, awarded the Nobel Prize in Literature in 1980. Quotes[edit] What is this enigmatic impulse that does not allow one to settle down in the achieved, the finished? I think it is a quest for reality. Przysięgam, nie ma we mnie czarodziejstwa słów. And now they had nothing, except his eyes. It would be more decorous not to live. Czeslaw Milosz - Czeslaw Milosz Biography. 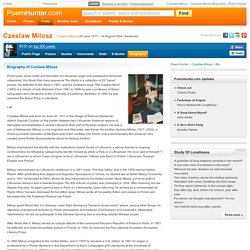 His World War II-era sequence The World is a collection of 20 "naive" poems. He defected to the West in 1951, and his nonfiction book "The Captive Mind" (1953) is a classic of anti-Stalinism. From 1961 to 1998 he was a professor of Slavic Languages and Literatures at the University of California, Berkeley. 70, Czeslaw Milosz. A loss of harmony with the surrounding space, the inability to feel at home in the world, so oppressive to an expatriate, a refugee, an immigrant, paradoxically integrates him in contemporary society and makes him, if he is an artist, understood by all. 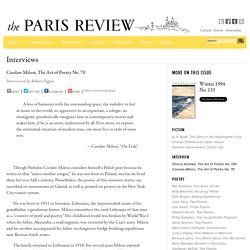 Even more, to express the existential situation of modern man, one must live in exile of some sort. —Czeslaw Milosz, “On Exile” Though Nobelist Czeslaw Milosz considers himself a Polish poet because he writes in that “native mother tongue,” he was not born in Poland, nor has he lived there for over half a century. Nonetheless, the poems of this sensuous mystic are inscribed on monuments in Gdansk as well as printed on posters in the New York City transit system. He was born in 1911 in Szetejnie, Lithuania, the impoverished estate of his grandfather, a gentleman farmer.

The family returned to Lithuania in 1918. The end of the war brought more dislocation. Since winning the Nobel Prize, Milosz has published many volumes of prose and poetry.