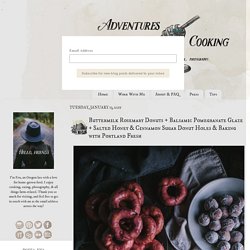 We'd met through instagram (yay instagram friends!) A couple months ago and have quickly bonded since then over our love of food and the northwest. Once we started in the kitchen, though, our culinary curiosity got the better of us and we went from plain old buttermilk donuts to rosemary donuts with a balsamic pomegranate glaze, salted honey donut holes, and cinnamon + sugar ones, too. Whew! What we thought would take a couple hours ended up taking all day due to our chattiness and all the fun we were having (we may have launched some of the donut holes into bowls of powdered sugar to see what happened/take photos of them), and we were still shooting as the sun went down. Malasadas (Portuguese Donuts) Filled with Chocolate, Haupia (Coconut), and Strawberry Recipe — Fix Feast Flair. Fat Tuesday's tomorrow and I can't help but get a little nostalgic for home. 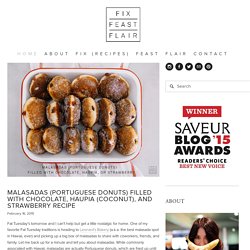 One of my favorite Fat Tuesday traditions is heading to Leonard's Bakery (a.k.a. the best malasada spot in Hawaii, ever) and picking up a big box of malasadas to share with coworkers, friends, and family. Let me back up for a minute and tell you about malasadas. While commonly associated with Hawaii, malasadas are actually Portuguese donuts, which are fried up until golden brown, rolled in sugar or cinnamon-sugar, then sometimes filled with delicious fillings like haupia (coconut pudding), chocolate, or vanilla custard. And they are so ono (delicious). Light and fluffy on the inside and fried to perfection, if you haven't had a Portuguese donut yet, add 'em to the list because they're a definite must! I should also note that while these are pretty much mandatory for Fat Tuesday, they are not exclusively enjoyed on this day.

The Sweet Chick: Root Beer Float Mini Donuts. Well, summer is over and school has started for my oldest. 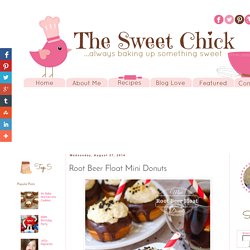 I am hoping to get the little one in pre-school this year also. The house is so quiet and peaceful now. I have more free time to get back into my hobbies. Baking, of course, being one of them. I had a package of Root Beer Float Oreos in the pantry screaming to be used. If you like root beer, you have got to try these Root Beer Float Oreos. Strawberry buttermilk donuts with strawberry glaze - A Happy Food Dance. Toffee apple doughnuts. Baked Vanilla Donuts - Hello Nature. If there’s opportunity to eat a donut, I have to take it. 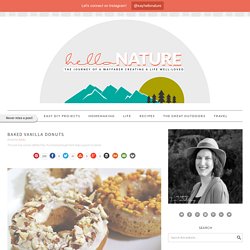 It’s not optional in my mind – it’s just how life will always be. Dieting? Doesn’t matter – I eat it quick it enough that it couldn’t possibly count as calories. Jelly-filled? Doesn’t matter – I may dislike the need to take away from the donuts delicious inside and fill it will gooey and sugary sweetness, but I’ll still eat it. Donuts have this magical pull on me that I don’t think I could break even if I tried, especially if there are nuts or maple involved. Now that you know my strange affection for donuts, let’s get on to boring things like how donuts are not Weight Watchers friendly. Well, I do now. Enjoy! Baked Vanilla Donuts Yields 6 Donut Ingredients 1 Cup All-Purpose Flour 6 Tbsp Buttermilk 6 Tbsp Truvia Baking Blend 1 Tbsp Melted Butter 1 Tsp Baking Powder 1/2 Tsp Cinnamon 1/2 Tsp Salt 3/4 Tsp Vanilla Extract 1 Egg Glaze/Frosting/Topping Ingredients For The Donuts Preheat the oven to 325F.

For The Coating. Pumpkin Spice Donut Holes with Pecan Crunch. A pumpkin spice post is predictable, but also obligatory. 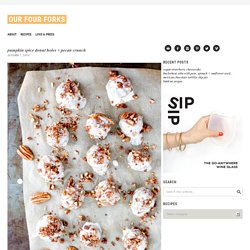 The other night, inspired by the weather (and Pinterest), I set out to make some paleo, gluten free pumpkin donuts. I attempted to fry them in coconut oil and while the flavor and texture were spot on, the frying part didn’t work out so well (burned outside, gooey inside). Kahlua Chocolate Cake Donuts. I made donuts! 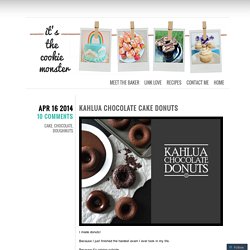 Because I just finished the hardest exam I ever took in my life. Because it’s raining outside. Because I’m a chocoholic and I honestly don’t care for bikini season. Banoffee Baked Donuts — Glazed & Confused. Now that I actually care about what my body looks like, I try to stay away from eating a half dozen donuts at midnight once every couple of days. 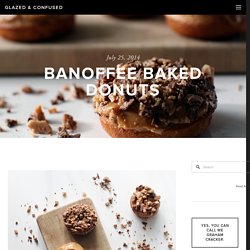 But I still crave them sometimes. Shit, I'm craving them right now. Considering that they're one of the culprits in my fat childhood, there is so much guilt attached to a box of these bad boys that it takes a lot to let me actually go out and get some. Instead, I make baked donuts. Gulkand Gulab Jamuns. If you're new here, consider subscribing to Recipeb♥x via RSS or Email. 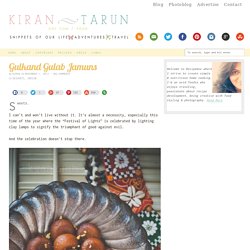 Free delivery to your mailbox as soon as we publish. Thanks for visiting! Sweets. I can’t and won’t live without it. Guest Post: Samoa Donuts. So I haven’t ever done a guest post. 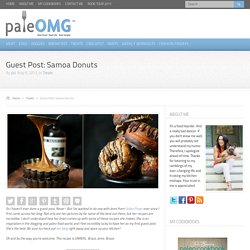 Never! But I’ve wanted to do one with Jenni from Urban Poser ever since I first came across her blog. Not only are her pictures by far some of the best out there, but her recipes are incredible. I don’t understand how her brain comes up with some of these recipes she makes. Donut. Pangako Sa'yo - Videos. Pinterest. Meet Google Drive – One place for all your files. Rcbc. Annual Fee Interest Rate RCBC Bankard Diamond Card. 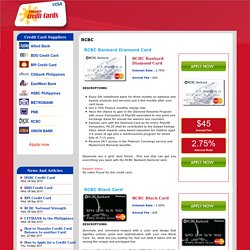 Les Minions (2015) How The Love Story of this Simple Man and Barbie Girl Started Will Surely Give You Hopes on Finding True Love! Fast & Furious 7 (2015) The Age of Adaline (2015) Starring Ethan Hawke & Selena Gomez.