I am a family law & divorce attorney at The Colwell Law Group, LLC based in Saratoga Springs, New York. I graduated from Albany Law School in 2001 with a concentration in criminal law. In May of 2005, I was selected for admission to the United States Supreme Court in Washington, D.C., however ultimately decided to join my husband in Albany to create The Colwell Law Group in September of 2008. Today, I tend to concentrate my practice in matrimonial/family law, real estate & landlord-tenant disputes, vehicle & traffic law, and criminal law. At CLG, we first help our clients to imagine a better future for both themselves and their children. Then we work with them to formulate a plan to make that future reality. Finally, we utilize our over 40 years of combined legal expertise to implement, execute and ultimately realize the goals set forth at the beginning of our relationship. Address: 18 Division Street Suite 310, Saratoga Springs, NY 12866 Phone: (518) 213-2841 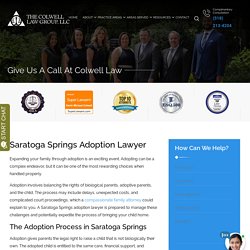 Adopting can be a complex endeavor, but it can be one of the most rewarding choices when handled properly. Adoption involves balancing the rights of biological parents, adoptive parents, and the child. The process may include delays, unexpected costs, and complicated court proceedings, which a compassionate family attorney could explain to you. A Saratoga Springs adoption lawyer is prepared to manage these challenges and potentially expedite the process of bringing your child home. The Adoption Process in Saratoga Springs Adoption gives parents the legal right to raise a child that is not biologically their own. Initiating the Adoption To begin the process, the adoptive parents must file a petition with the court.

Consents In New York, the biological parents must consent to the adoption, or have their parental rights terminated by the court. Home Studies Before finalizing an adoption, the state requires a home study. Consents. Saratoga Springs Child Support Lawyer. When a married couple with children goes through a divorce, determining which party will be responsible for paying child support is often a major concern. 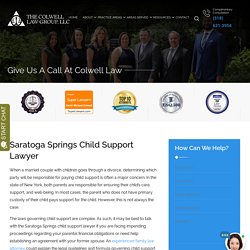 In the state of New York, both parents are responsible for ensuring their child’s care, support, and well-being. In most cases, the parent who does not have primary custody of their child pays support for the child. However, this is not always the case. The laws governing child support are complex. As such, it may be best to talk with the Saratoga Springs child support lawyer if you are facing impending proceedings regarding your parental financial obligations or need help establishing an agreement with your former spouse. Factors That Determine Child Support in Saratoga Springs There are a wide range of factors that a court considers when determining a parent’s financial obligation.

For example, if couple has two children together, the child support amount would be equal to 25 percent of both parties’ combined salaries. Saratoga Springs Marital Agreements Lawyer. A marital agreement is an important document that outlines the rights and legal obligations of a married couple. 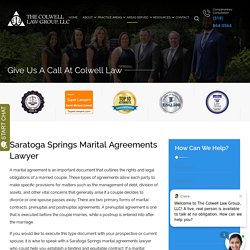 These types of agreements allow each party to make specific provisions for matters such as the management of debt, division of assets, and other vital concerns that generally arise if a couple decides to divorce or one spouse passes away. There are two primary forms of marital contracts: prenuptial and postnuptial agreements. A prenuptial agreement is one that is executed before the couple marries, while a postnup is entered into after the marriage. If you would like to execute this type document with your prospective or current spouse, it is wise to speak with a Saratoga Springs marital agreements lawyer who could help you establish a binding and equitable contract. If a marital agreement is not executed correctly, the court may later render it invalid, which complicates any court proceedings if the marriage dissolves or one party dies.

Saratoga Springs Domestic Violence Lawyer. A home should be a safe place but personal and professional stress often spills over into family violence. 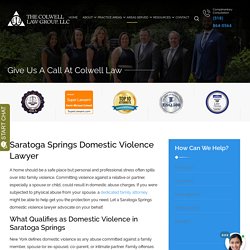 Committing violence against a relative or partner, especially a spouse or child, could result in domestic abuse charges. If you were subjected to physical abuse from your spouse, a dedicated family attorney might be able to help get you the protection you need. Let a Saratoga Springs domestic violence lawyer advocate on your behalf. What Qualifies as Domestic Violence in Saratoga Springs New York defines domestic violence as any abuse committed against a family member, spouse (or ex-spouse), co-parent, or intimate partner.

Verbal abuseEmotional manipulation and harmPhysical violenceSexual assault or unwanted sexual behaviorThreats to commit any of the above forms of abuse Individuals filing domestic violence charges in Saratoga Springs should speak with an attorney about gathering evidence of abuse. Potential Protections Available After a Family Offense Abuse comes in many forms. Saratoga Springs Divorce Lawyer. Divorce is a stressful and challenging time. 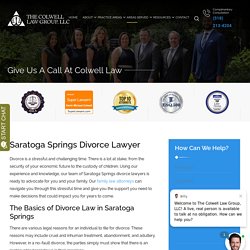 There is a lot at stake, from the security of your economic future to the custody of children. Using our experience and knowledge, our team of Saratoga Springs divorce lawyers is ready to advocate for you and your family. Our family law attorneys can navigate you through this stressful time and give you the support you need to make decisions that could impact you for years to come. The Basics of Divorce Law in Saratoga Springs There are various legal reasons for an individual to file for divorce. Regardless of the reason for divorce, many cases involve three significant issues: distribution of assets and debts, spousal support, and matters involving children.

Equitable Distribution Equitable distribution is the manner in which a court divides marital property between the two divorcing spouses. Marital assets may include all real estate, personal property, and financial assets acquired during the marriage. Spousal Support Equitable Distribution. Saratoga Springs Child Custody Lawyer. One of the most challenging parts of divorce or separation is the decision about child custody. 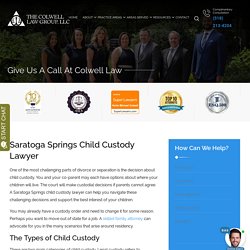 You and your co-parent may each have options about where your children will live. The court will make custodial decisions if parents cannot agree. A Saratoga Springs child custody lawyer can help you navigate these challenging decisions and support the best interest of your children. You may already have a custody order and need to change it for some reason.