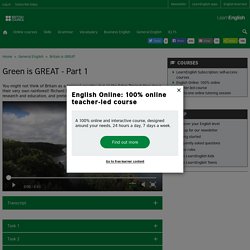 The people here work really hard to protect the environment. The nation is trying to reduce the impact their daily lives have on the planet, which in turn means reducing their carbon footprint. Let’s find out how… Britain has the largest indoor rainforest in the world, which is used for environmental research. It’s also a world leader in wind energy at sea and on land. And the London 2012 Olympics are the first truly sustainable ever, which means the environmental benefit of the Games will last for a very long time.

This is the Eden Project in Cornwall. The Eden Project started life over ten years ago as an old china clay pit; it was just a hole in the ground. The Eden Project features a number of different biomes. Richard: Hetty, what’s the idea behind the Eden Project? General English - Britain is GREAT. It looks like something from outer space, but it’s a wind turbine and it’s revolutionary! 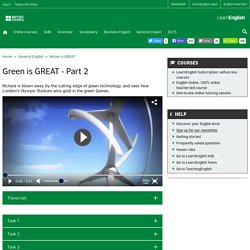 Wind power has been around for centuries, but this is something new. Big wind farms have managed to harness the power of the wind off-shore or on high ground where it’s windy, but what about places where there’s not so much space or wind? Award-winning British company ‘Quiet Revolution’ have developed a turbine with an upright axis which can be put practically anywhere and is near silent. Harnessing wind energy in urban areas and tight spaces is a challenge. As wind travels past buildings, it changes speed and is difficult to catch. And all that energy can be used on site, so it’s good for the environment and it saves money! The sun is another important source of renewable energy. Behind me is the incredible Olympic Park where much of the action will take place during London’s Olympic Games.

General English - Britain is GREAT. Welcome to Great Britain and the best of British countryside! 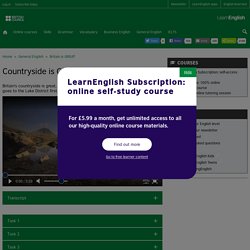 This landscape is incredibly varied, from the sweeping coastlines to the rolling hills and majestic mountains and, with a mild climate and plenty of rain, this really is a green and pleasant land that I’m about to explore. There are 15 national parks in Great Britain, and one of the most beautiful is here in the Lake District. It’s the second largest national park in Britain and is full of scenic mountains and picturesque lakes.

In the heart of the Lake District is Lake Windermere – the largest natural lake in England. It’s over 18km long and around 66m deep – so it’s fairly easy to find! This area is said to be one of the most beautiful in Great Britain. Hiya. Richard: Hello, Jacqui. Jacqui: Hello, Richard. Richard: Jacqui O'Connor of Lake Windermere Cruises is giving me a private tour of the lake. LearnEnglish Magazine World Emoji Day. Emojis real meaning with detailEmojis. General English - Magazine. Emoji is the fastest growing language in history. 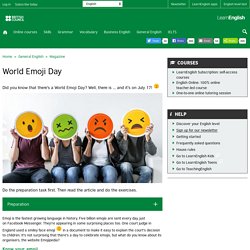 Five billion emojis are sent every day, just on Facebook Messenger. They're appearing in some surprising places too. One court judge in England used a smiley face emoji in a document to make it easy to explain the court's decision to children. It's not surprising that there's a day to celebrate emojis, but what do you know about its organisers, the website Emojipedia? Know your emoji The company Unicode actually creates the computer code that give us emojis, but Emojipedia is where you can learn exactly what each emoji means and how to use it.

So, for example, go to Emojipedia and type in sick and it will give you several options. New, inclusive emojis Unicode adds new emojis all the time. Save the date! There's some emoji history behind how Emojipedia chose 17 July to celebrate World Emoji Day. The code for each emoji is the same, but different platforms, like Twitter or Facebook, for example, design their emojis in different ways. General English - Video zone. Annika: I'm nine years old. 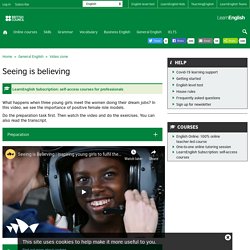 I think it's the greatest year to be alive. Director: So, Sierra, can you tell me what you want to be when you grow up? Sierra: I want to be an author. Because it's a chance I get to use my imagination. Annika: I want to be a marine biologist when I grow up. Brianna: I'd like to be a helicopter doctor because I've always wanted to be a doctor and I really love helicopters. Director: So, can you name some authors for me? Sierra: David Walliams, Roald Dahl and um ... Annika: I look up to Charles Darwin and Jacques Cousteau. Director: Do you think there's more men or women who do that job? Brianna: I don't think it's a job that women would be interested in. Director: Why? Brianna: Because I think women would be more into being a nurse. (We tell children that they can do anything …) Annika: There's more boys than girls that do it. (… but how can we expect them to believe …)