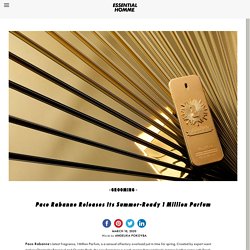 Created by expert scent makers Christophe Raynaud and Quentin Bisch, the new fragrance is a rich aroma that seamlessly marries leather notes with floral, evoking a scene of a slight heatwave of a midsummer night. 5 Grooming Products For When You Can't Touch Your Face. With each passing day, more unsettling news about the coronavirus outbreak surfaces — it’s already claimed Coachella and the upcoming Gucci Resort show. 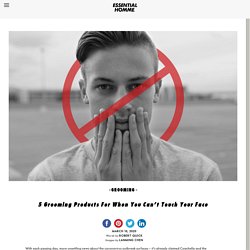 Tracking the epidemic is a fairly unpredictable task but one thing is certain: It’s going to get worse before it gets any better. As concern about the epidemic grows and sanitary products on Amazon dwindle, the public is being encouraged to avoid crowds, work remotely, stock up on basic household supplies, wash their hands frequently, and, most importantly, avoid touching their faces. Humans on average touch their faces 23 times an hour, so this advice is as hard to follow as it is practical. Yet despite the increasing panic, people are also encouraged to continue living their lives as normally as possible, which I’m assuming means grooming included. But is it possible to practice and maintain a healthy skincare routine without touching your face? Liberex Sonic Vibrating Facial Cleansing Brush. Supreme x Nike Air Force 1s are Coming This Week. Fashion The first big sneaker collab of the year is dropping this week. 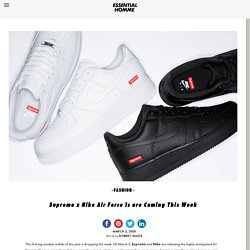 On March 5, Supreme and Nike are releasing the highly anticipated Air Force 1s. The two major brands have a pretty extensive history working together, on average dropping something at least once a year since they first joined forces in 2002. Meet 7 Women That Are Shaping Men's Fashion. This Sunday, March 8, is Women’s International Day, a day dedicated to celebrating women’s numerous contributions to society. 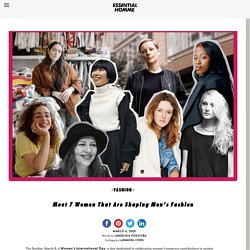 Fashion is an industry that’s stereotyped as a women’s world despite the fact that the majority of designers and highest-ranking officials are, and always have been, men. But today, more women are taking on larger roles in the industry as a step towards amending fashion’s longtime gender inequality issue. It's Been a Long Week: Mary Lychee. Food And Drink It’s Been a Long Week: Mary Lychee As true believers of the work hard, play hard mantra, we present you with It’s Been a Long Week, a weekly column aimed at awarding some liquid appreciation to you for just being yourself, dammit. 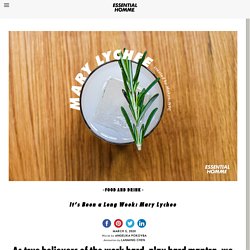 Make yourself a glass or two, on us — you deserve it. Saint Mark’s Place welcomes Mokyo, a Korean tapas bar and restaurant. By the team behind Thursday Kitchen, the new venue is an upscale introduction to Korean cuisine and the dimly-lit interior, knowledgeable staff, and tasty fare make it the perfect date-night outing. Ingredients: Fendi Tapped MoonStar for its Latest Sneaker. Fashion Fendi‘s Spring/Summer 2020 collection was inspired by Silvia Venturini Fendi’s garden, with the botanical theme featured prominently throughout the collection. 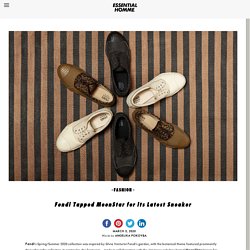 In particular, the footwear — made in collaboration with the Japanese cult shoe brand MoonStar known for its vulcanized shoes made by heating natural rubber — emphasized this gardening mood. The 2020 Tokyo Olympics Might Be Canceled. Lifestyle As the world continues to find a way to contain the growing coronavirus outbreak, rumors that the upcoming 2020 Tokyo Olympic Games could be canceled are now circulating. 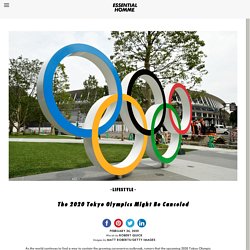 Dick Pound, a senior member of the International Olympic Committee (IOC), stated that the organization has a 2-3 month window to determine whether to proceed with the event amidst increasing pandemic concerns. “In and around that time, I’d say folks are going to have to ask: ‘Is this under sufficient control that we can be confident about going to Tokyo or not?’” 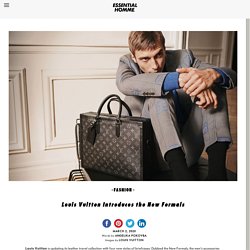 Dubbed the New Formals, the men’s accessories are meant to accommodate a modern businessman by introducing four fashion-forward options to bring back the briefcase. The collection includes the Soft Trunk Briefcase, a trendy box-form bag; the Sac Plat Horizontal Zippé, a more traditional serviette briefcase available in two variations; and the Cabas Business, a bulkier multifunctional piece. Introduced by the brand’s menswear artistic director Virgil Abloh, the collection is the latest to showcase the new aesthetic potential in the world of men’s bags and travel pieces. (Remember the hologram bag from last spring?) LOUIS VUITTON SPRING/SUMMER 2013Filtered though Kim Jones' and Marc Jacobs' eyes, the nautical theme pervasive throughout this collection is anything but the norm. Hawthorne Wants You to Build Your Own Grooming Kit. Grooming Starting your own grooming routine can be pretty daunting. 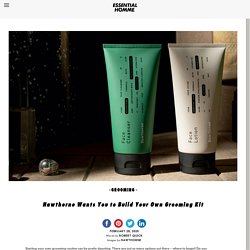 There are just so many options out there — where to begin? Do you wanna combat dark circles or stop all visible signs of aging? Milagro Tequila x Onora: A Love Letter to Mexico. Lifestyle Two artisanal Mexican traditions unite with Milagro Tequila’s collaboration with Onora Casa. 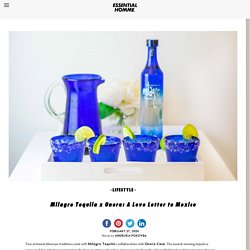 The award-winning tequila is renowned for adapting ancestral methods in creating weber blue agave tequila from the Jalisco Highlands and bringing it to Mexico City. This work ethos resonates with Onora’s efforts to preserve traditional craft techniques. The JW Anderson x Uniqlo Collection is Perfect for Upstate. Fashion The latest collection from JW Anderson and Uniqlo is pure countryside mod. For the Spring/Summer 2020 line the duo launched several transitional looks that are easy to integrate into your wardrobe, as well as its first range of childrenswear. There’s a British heritage element that permeates the collection, a nod to JW Anderson’s own upbringing, through the use of neutral plaid patterns and boxy polo shirts. The practical nature of Uniqlo is also evident in the collection, through oversized fits, well-structured tailored trousers, and subtle accessories that wouldn’t be hard to match with stuff you already own.

Nowadays, when collaborations between household names usually amount to just combining logos, it’s refreshing to see two brands with such distinct visions join forces to create something that is reflective of both of them. Essential Homme Magazine. Fashion The Colombian reggaeton star J Balvin joins Jennifer Lopez as the face of Guess‘ Spring 2020 campaign. Having previously starred in a campaign for the American brand, this time Balvin takes Guess to visit his home — Medellín, Colombia.

The vibrant collection, dubbed “Colores” allowed for the artist to explore designing himself. Inspired by his upcoming album, bearing the same name, the featured pieces reflect the colorful streets and the energy of the city. For the campaign, Balvin took a two-day journey through his city, allowing fans to join him on the shoot with photographer Tatiana Gerusova. Germain-Robin Brandy Revamps Its Style & Limited Production. Food And Drink The California-based brandy Germain-Robin is relaunching its two expressions Germain-Robin and Germain-Robin XO in limited quantities with an entirely new bottle design.

Just in time for the launch, Hubert Germain-Robin has returned as the prodigal co-founder to work alongside Master Distiller David Warter to uphold the brand’s exquisite standard. Germain-Robin has long been renowned for using handcrafted cognac stills and complex, aromatic California grapes in its spirits. Imposing centuries of family history with brandy, Hubert refused to cut corners in the new releases — as a result, each release contains only 2,300 6-pack cases of the spirit. Diesel Launches Its First Upcycled Collection with 55DSL. Fashion After pledging its commitment to a sustainable future last month, Diesel premiered its DIESEL UPCYCLING FOR initiative during Milan Fashion Week.

The ongoing series of collections will feature a guest designer each round, similar to Moncler’s Genius series, that is aligned with the brand’s four key pillars of clean fashion. The project aims to reduce the consumption of raw materials, energy use, water pollution, and greenhouse gas emissions by transforming existing products, waste material, and deadstock into capsule collections (aka upcycling). Ezra Miller Haunts the Saint Laurent SS '20 Campaign. Fashion Following in the footsteps of Travis Scott, Keanu Reeves, and the fashionable men before them, Ezra Miller is the newest face of Saint Laurent. The enigmatic gender-fluid actor stars in a classic black-and-white portrait campaign for the label’s Spring/Summer 2020 collection shot by longtime collaborator David Sims.

In one image, Miller sports a mystical sequin top and pair of billowy black trousers with matching painted black nails. Another look finds the star in an open button-down shirt, wearing lots of jewelry and a lustrous pair of high-waisted pants. Since his cultural emergence starring opposite the similarly enigmatic Tilda Swinton in We Need to Talk About Kevin, Miller has continued to intrigue the public with his unique talents, taste for avant-garde fashion, and gender-fluid style that turns heads on every red carpet he steps on. A Dior Men's Store Just Opened in SoHo. Fashion. How Louis Vuitton Took Over Frieze LA. Lifestyle. Introducing Away's Newest Alpine-Inspired Luggage.

Lifestyle. Gucci Gets Psychedelic With its Latest Collection. Fashion Gucci has long embraced elements of surrealism and psychedelia, especially since Alessandro Michele took over as creative director in 2015, with everything from baby dragons to severed heads making appearances on the runway. The Best Looks from the 2020 Academy Awards. Check Out the Adidas x Major League Soccer 2020 Jerseys. Lifestyle. It's Been a Long Week: Lavender Daiquiri. Food And Drink. Prada and UNESCO Take on Ocean Preservation. Gucci Will Host its Cruise 2021 Show in San Francisco. Fashion Gucci has announced it will present its forthcoming Cruise 2021 collection in San Francisco. G-Star Raw Makes Denim Designed for Re-Use.