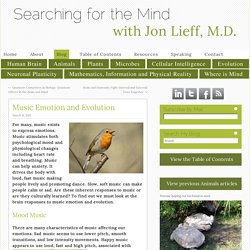 Music stimulates both psychological mood and physiological changes including heart rate and breathing. Music can help anxiety. It drives the body with loud, fast music making people lively and promoting dance. Slow, soft music can make people calm or sad. Are Microtubules the Brain of the Neuron. Microtubules may be the brains of the cell, particularly neurons—operating like a computerized Lego set. 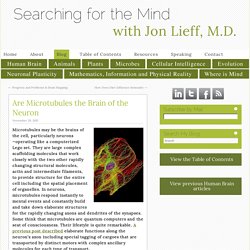 They are large complex scaffolding molecules that work closely with the two other rapidly changing structural molecules, actin and intermediate filaments, to provide structure for the entire cell including the spatial placement of organelles. In neurons, microtubules respond instantly to mental events and constantly build and take down elaborate structures for the rapidly changing axons and dendrites of the synapses. Some think that microtubules are quantum computers and the seat of consciousness.

Criminal Minds Are Different From Yours, Brain Scans Reveal. The latest neuroscience research is presenting intriguing evidence that the brains of certain kinds of criminals are different from those of the rest of the population. 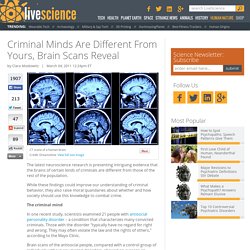 While these findings could improve our understanding of criminal behavior, they also raise moral quandaries about whether and how society should use this knowledge to combat crime. The criminal mind In one recent study, scientists examined 21 people with antisocial personality disorder – a condition that characterizes many convicted criminals. Those with the disorder "typically have no regard for right and wrong. They may often violate the law and the rights of others," according to the Mayo Clinic. 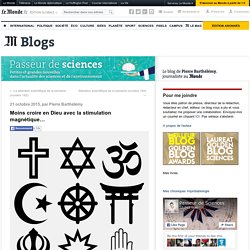 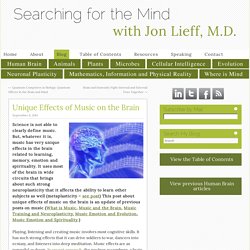 But, whatever it is, music has very unique effects in the brain related to learning, memory, emotion and spirituality. New brain monitor makes sure you're REALLY under anaesthesia. Scientists in Australia have created a world-first device that monitors changes in brain activity during surgery to detect if someone's coming out from under anaesthesia. 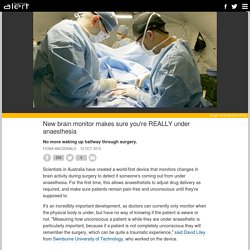 For the first time, this allows anaesthetists to adjust drug delivery as required, and make sure patients remain pain-free and unconscious until they're supposed to. It's an incredibly important development, as doctors can currently only monitor when the physical body is under, but have no way of knowing if the patient is aware or not. "Measuring how unconscious a patient is while they are under anaesthetic is particularly important, because if a patient is not completely unconscious they will remember the surgery, which can be quite a traumatic experience," said David Liley from Swinburne University of Technology, who worked on the device. A study last year found that roughly one in 19,600 patients wake up during surgery - with the rates as high as one in 670 for light anaesthesia procedures such as caesarians. Unique Type of Neuroplasticity With Stress.

Both the wired neuronal brain and the wireless brain of the immune system perceive stress. 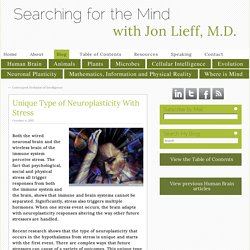 The fact that psychological, social and physical stress all trigger responses from both the immune system and the brain, shows that immune and brain systems cannot be separated. Significantly, stress also triggers multiple hormones. When one stress event occurs, the brain adapts with neuroplasticity responses altering the way other future stressors are handled. Recent research shows that the type of neuroplasticity that occurs in the hypothalamus from stress is unique and starts with the first event.

Maintaining Neuronal Identity. When neurons differentiate from stem cells, they become a very particular type of cell that can last a hundred years. 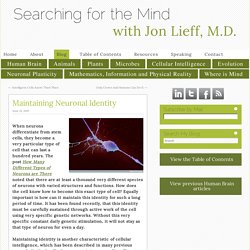 The post How Many Different Types of Neurons are There noted that there are at least a thousand very different species of neurons with varied structures and functions. How does the cell know how to become this exact type of cell? Immune T Cells Are Critical for Cognitive Function. Immune T cells have a very complex life, travelling to different regions of the body and maturing gradually through stages to be able to engage and fight a wide range of invaders. 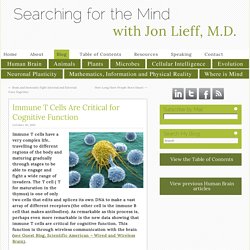 The T cell ( T for maturation in the thymus) is one of only two cells that edits and splices its own DNA to make a vast array of different receptors (the other cell is the immune B cell that makes antibodies). As remarkable as this process is, perhaps even more remarkable is the new data showing that immune T cells are critical for cognitive function. This function is through wireless communication with the brain (see Guest Blog, Scientific American – Wired and Wireless Brain).

Previous posts have begun to describe the enormous complexity of the immune wireless communication system—the cytokine signaling (as. Time Cells Organize Memory. Yesterday, When I woke up I washed and dressed And while drinking coffee, The telephone rang, 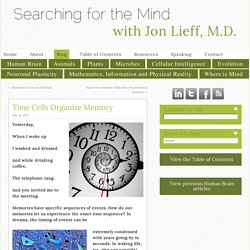 New way to repair nerves: Using exosomes to hijack cell-to-cell communication. Regenerative medicine using stem cells is an increasingly promising approach to treat many types of injury. Transplanted stem cells can differentiate into just about any other kind of cell, including neurons to potentially reconnect a severed spinal cord and repair paralysis. A variety of agents have been shown to induce transplanted stem cells to differentiate into neurons. Tufts University biomedical engineers recently published the first report of a promising new way to induce human mesenchymal stem cells (or hMSCs, which are derived from bone marrow) to differentiate into neuron-like cells: treating them with exosomes. Light in the Brain. Light supplies the energy of life in many ways. When light hits the extremely complex molecular factories for photosynthesis, it triggers an electron that moves to the processing center by quantum superposition; this electron stimulates complex chemical cycles that make energy particles—ATP—as well as carbon molecules like sugar.

Light bounces off objects landing in the eye’s retina to form images in the brain, allowing sight. Light, also, provides the stimulus for cellular clocks, which regulate all metabolic processes, including wakefulness and sleep. Light stimulates skin cells to start the process of making vitamin D, vital for all cells including the brain. Light has long been a metaphor for advanced mental processes—enlightenment. Can Neuroscience Improve Education. Can the deluge of recent neuroscience data help improve education? This post will summarize what is known, and not known, about brain data and its possible impact on methods of education. There is a lot media attention to brain research and many of the popular conclusions are exaggerations.

In fact, even neuroscientists are responsible for this over reach by over interpreting MRI data (see post Limits of Neuroscience). A chief neuroscientist recently noted in Nature “neuroscientists would agree that, with a few notable exceptions, the relationship between neural circuits and behavior has yet to be established”. Research shows that the word “brain” is used far more than even a few years ago as an explanation for behavior in newspaper headings.

The Five Secrets of Brain Health. The brain is a 3-pound organ in our body, which, like any other organ, can be healthy or unhealthy. Uniquely, the brain is intertwined with our mind, emotions, behavior and the functions of all other organs. Fortunately, simple actions in daily life can have a great effect on maximizing brain health and minimizing degenerative brain diseases. Electrical Fields Guiding 3D Shape of Cells and Organs. Researchers discover neurons in the brain that weigh costs and benefits to drive formation of habits. We are creatures of habit, nearly mindlessly executing routine after routine. Some habits we feel good about; others, less so. Habits are, after all, thought to be driven by reward-seeking mechanisms that are built into the brain. It turns out, however, that the brain's habit-forming circuits may also be wired for efficiency.

Researchers create a promising new treatment for the deadliest form of brain cancer. Brain Electricity and the Mind. Dual Function Molecules for Brain and Immunity. Important Link between the Brain and Immune System Found. When the ancient Egyptians prepared a mummy they would scoop out the brain through the nostrils and throw it away. Extra Cellular Matrix Is Critical to Neuroplasticity. How can the area outside of, and in between, cells be critical to the functioning of brains? This is how your kid learns: The amazing new neuroscience of “brain plasticity” — and how to make your child smarter. The Science Behind a More Meaningful Understanding of Sexual Orientation. Leaving Facebook...

Neuroscientists Are Making an Artificial Brain for Everyone. Every bite you take, every move you make, astrocytes will be watching you. Could Memory Traces Exist in Cell Bodies? Scientists can now convert human blood samples into nerve cells. Harvard Neurosurgeon Confirms The Afterlife Exists. How a schizophrenia risk gene affects the brain.