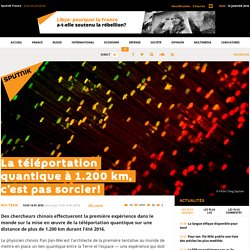 Spooky Action Is Real: Bizarre Quantum Entanglement Confirmed in New Tests. Sorry to break it to you, Einstein, but it looks like the universe is one big dice game. 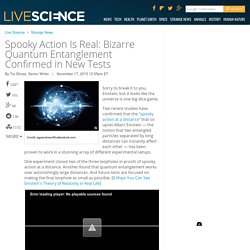 Two recent studies have confirmed that the "spooky action at a distance" that so upset Albert Einstein — the notion that two entangled particles separated by long distances can instantly affect each other — has been proven to work in a stunning array of different experimental setups. One experiment closed two of the three loopholes in proofs of spooky action at a distance.

Another found that quantum entanglement works over astonishingly large distances. And future tests are focused on making the final loophole as small as possible. [8 Ways You Can See Einstein's Theory of Relativity in Real Life] Overall, the new series of tests is simply confirming what physicists have long suspected. "There is no hidden, more fundamental theory underneath quantum mechanics," said Ronald Hanson, a physicist at Delft University in the Netherlands and the lead investigator in one of the new experiments. Historic Delft Experiments tests Einstein's 'God does not play dice' using quantum 'dice' Random number generators developed at ICFO - The Institute of Photonic Sciences, by the groups of ICREA Professors Morgan W. 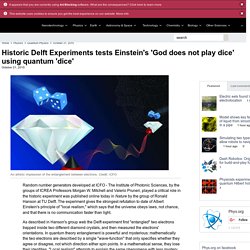 Mitchell and Valerio Pruneri, played a critical role in the historic experiment was published online today in Nature by the group of Ronald Hanson at TU Delft. The experiment gives the strongest refutation to date of Albert Einstein's principle of "local realism," which says that the universe obeys laws, not chance, and that there is no communication faster than light. Flickering Light From Young Stars Reveals Link to Matter-Eating Black Holes. A Compilation of Young Stellar Objects (YSOs) (Image Credit: NASA) An international team of astronomers, including Dr Simon Vaughan from the University of Leicester’s Department of Physics and Astronomy, has discovered a previously unknown link between the way young stars grow and the way black holes and other exotic space objects feed from their surroundings. 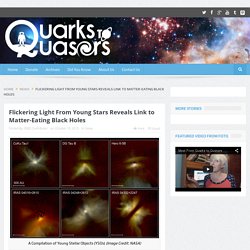 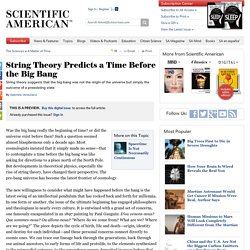 To access the full article. Already purchased this issue? Sign In Was the big bang really the beginning of time? Or did the universe exist before then? The new willingness to consider what might have happened before the bang is the latest swing of an intellectual pendulum that has rocked back and forth for millennia. Sign Up - World Science U. Eleven-year cosmic search leads to black hole rethink. One hundred years since Einstein proposed gravitational waves as part of his general theory of relativity, an 11-year search performed with the Commonwealth Scientific and Industrial Research Organization’s (CSIRO) Parkes telescope has shown that an expected background of waves is missing, casting doubt on our understanding of galaxies and black holes. 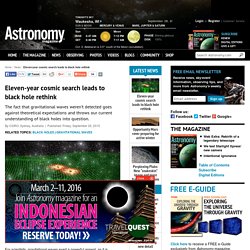 For scientists, gravitational waves exert a powerful appeal, as it is believed they carry information allowing us to look back into the very beginnings of the universe. Although there is strong circumstantial evidence for their existence, they have not yet been directly detected. Using Parkes, the scientists expected to detect a background “rumble” of the waves coming from the merging galaxies throughout the universe, but they weren’t there. The world’s first such research has caused scientists to think about the universe in a different way. Before the Big Bang: Looking Back in Time. 10 to 1: Bugs Win in NASA Study Highlighting Microbes (1YM Miniseries) “That's one small step for (a) man; one giant leap for mankind.” 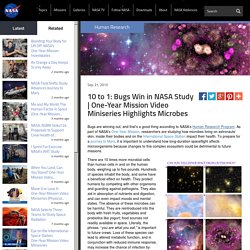 When Neil Armstrong took his first steps on the moon, many strides came before to achieve that moment in history. The same is true for a human mission to Mars. One step towards that journey begins in March 2015, when NASA astronaut Scott Kelly will make history as the first American to spend a year in space. Team Breaks Distance Record for Quantum Teleportation. BOULDER, Colo. 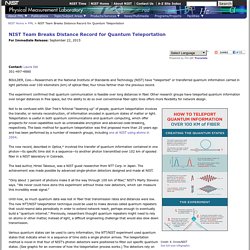 —Researchers at the National Institute of Standards and Technology (NIST) have “teleported” or transferred quantum information carried in light particles over 100 kilometers (km) of optical fiber, four times farther than the previous record. The experiment confirmed that quantum communication is feasible over long distances in fiber. Other research groups have teleported quantum information over longer distances in free space, but the ability to do so over conventional fiber-optic lines offers more flexibility for network design.

Not to be confused with Star Trek’s fictional “beaming up” of people, quantum teleportation involves the transfer, or remote reconstruction, of information encoded in quantum states of matter or light. NASA Space Place. Les mondes parallèles existent, affirment des chercheurs australiens et américains. Wormhole Illusion Causes Magnetic Field To Move Through Space Undetected. Scientists have developed a magnetic system that mimics the behavior of a wormhole – theorized to allow space-time to be bent, and vast distances to be traveled in an instant – but it absolutely is not an actual wormhole, so don’t get too excited. 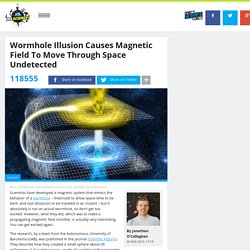 However, what they did, which was to make a propagating magnetic field invisible, is actually very interesting. You can get excited again. Garrett Lisi sur la théorie du Tout. Warp speed travel is theoretically possible, says astrophysicist. Despite all the intergalactic hopping in science fiction and the occasional extraordinary research claim, most of us have accepted that when it comes to travel, humanity is always going to be limited by the speed of light. 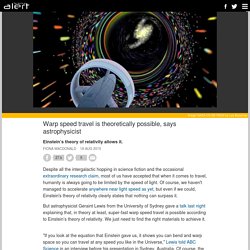 Of course, we haven't managed to accelerate anywhere near light speed as yet, but even if we could, Einstein's theory of relativity clearly states that nothing can surpass it. But astrophysicist Geraint Lewis from the University of Sydney gave a talk last night explaining that, in theory at least, super-fast warp speed travel is possible according to Einstein’s theory of relativity. We just need to find the right materials to achieve it. The Science of Ascension – Positrons Have Arrived to Transform Our Reality. This is the first time scientists have ever seen positrons being ejected from the SUN because it is the first time positrons have been ejected from the sun in this reality system. The Sun is now ejecting POSITRONS. A Positron is the anti particle of the particle Electron. Finite Theory of the Universe, Dark Matter Disproof and Faster-Than-Light Speed - Page 23.

Revealing the Secrets of the Universe in IMAX Theaters. A unique IMAX 3D experience that seeks to answer the most essential questions about the universe is just few steps away from being released with an ambitious intention to inspire the inner scientist in every one of us. The film entitled “Secrets of the Universe” will take the science-curious audience for a trip to fascinating cosmic phenomena seen through the lens of experiments at the world's largest and most powerful particle accelerator. “’Secrets of the Universe’ will explore some of the most elusive and fascinating phenomena in the cosmos under investigation at the Large Hadron Collider (LHC) in Geneva, Switzerland, and explain today’s advance scientific discoveries in layman's terms,” Tom Assam-Miller of CrowdfundX, the project’s Media Relations Manager, told astrowatch.net. La Nasa et l'agence spatiale européenne préparent enfin le public à la divulgation des extraterrestres.

Well, apparently some physicists just can't seem to leave it there. Credit: NASA. An easy way to think about the entropy of black holes is to consider that entropy represents the loss of free energy – that is, energy that is available to do work – from a system. Needless to say, anything you throw into a black hole is no longer available to do any work in the wider universe. Coronal Cells - Abstract - The Astrophysical Journal. 'Impossible' rocket drive works and could get to Moon in four hours. Watch full interview by EnvisionNation • Mankind to return to the moon in 2018. VIDÉO - La Terre se découvre une grande soeur lointaine. Des astronomes ont découvert une nouvelle exoplanète qui pourrait être la plus similaire à la Terre jamais observée, a annoncé la Nasa ce jeudi. Désolé, cette vidéo n'est pas disponible sur votre mobile.....

Dwarf Galaxies Contradict Current Dark-Matter Predictions. Like all galaxies, our Milky Way is home to a strange substance called dark matter. Dark matter is invisible, betraying its presence only through its gravitational pull. Without dark matter holding them together, our galaxy's speedy stars would fly off in all directions. The nature of dark matter is a mystery -- a mystery that a new study has only deepened.

The standard cosmological model describes a universe dominated by dark energy and dark matter. NASA's New Horizons probe makes history at Pluto. Mission managers who were packed into the New Horizons "mission control" room anxiously waiting to hear from the spacecraft broke into applause. The probe had spent more than 12 hours out of contact while it collected data from Pluto and its five moons. The communications outage was planned, but it still had scientists on edge. The flyby was the most dangerous part of the mission; there was a chance that stray dust in the Pluto system could collide with the spacecraft.