Meridian Medicine. Meridians are not a channel as per Jiro Murai. 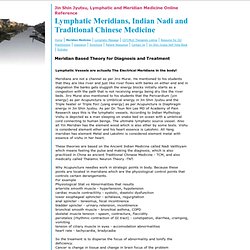 He mentioned to his students that they are like river and just like river flows with banks on either end and in stagnation the banks gets sluggish the energy blocks initially starts as a congestion with the path that is not receiving energy being dry like the river beds. Jiro Murai also mentioned to his students that the Pericardium (yin energy) as per Acupuncture is Umbilical energy in Jin Shin Jyutsu and the Triple heater or Triple Foci (yang energy) as per Acupuncture is Diaphragm energy in Jin Shin Jyutsu. As per Dr. Tsun Nin Lee MD of Academy of Pain Research says this is the lymphatic vessels. According to Indian Mythology Vishu is depicted as a man sleeping on snake bed on ocean with a umbilical cord connecting to human beings. Why Acupuncture needles work in strategic points in body. For example Physiological Stat vs Abnormalities that results arteriole smooth muscle - hypertension, hypotension heart rate - tachycardia, bradycadia 1.

Flows for Life » Q&A: Jin Shin Jyutsu Hold for Adrenals? Internal Alchemy: An Overview. Inner Alchemy or Neidan – a term often used synonymously with Qigong - is the Taoist art and science of gathering, storing and circulating the energies of the human body. 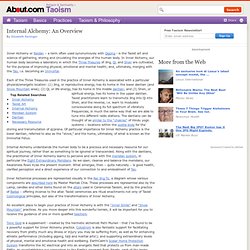 Internal Alchemy understands the human body to be a precious and necessary resource for our spiritual journey, rather than as something to be ignored or transcended. Suggested Reading: Golden Elixir Chi Kung, by Mantak Chia. The 8 Extraordinary Meridians or "Strange Flows" The Development of Jin Shin Do. Homepage By Iona Marsaa Teeguarden,M.A., L.M.F.T. 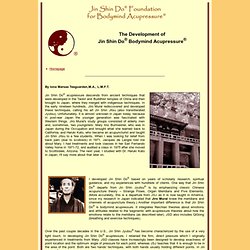 Jin Shin Do® acupressure descends from ancient techniques that were developed in the Taoist and Buddhist temples of China and then brought to Japan, where they merged with indigenous techniques. In the early nineteen hundreds, Jiro Murai rediscovered and developed these techniques, calling his art Jin Shin Jitsu (also transliterated Jyutsu). Unfortunately, it is almost unknown in Japan today, because in post-war Japan the younger generation was fascinated with Western things. Jiro Murai's study groups consisted of elderly men and, sometimes, two youngsters: Mary Iino Burmeister, who was in Japan during the Occupation and brought what she learned back to California, and Haruki Kato, who became an acupuncturist and taught Jin Shin Jitsu to a few students.

Over the past couple decades in the U.S., Jin Shin Jyutsu® has become characterized by the use of a very light touch. Top of Page The Journey of a Lifetime Dr. The story goes on. September 2008. Question: I wonder if you can help me. 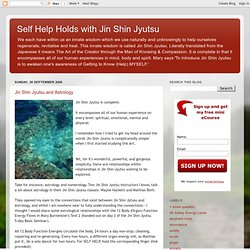 Every morning for the last few weeks I have woken up with pins and needles in my shoulders and arms. I have a friend who has been on one of the 5-day seminars, but I haven't. Is there anything she can do to help me, and is there anything simple I can do for myself to relieve this. Recently I have also started sweating quite a lot at night. I like your jin shin jyutsu blog and I would be grateful for your answer. Answer: Yes, there is help available! Jin Shin Jyutsu NYC - SELF-HELP. The simplest and most important SELF-HELP tool we have is our BREATH. 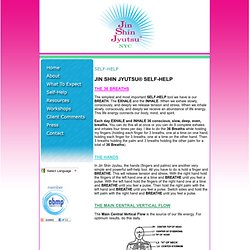 The EXHALE and the INHALE. When we exhale slowly, consciously, and deeply we release tension and stress. When we inhale slowly, consciously, and deeply we receive an abundance of life energy. This life energy connects our body, mind, and spirit. Jin Shin JyutsuÂ® Safety Energy Locks. JSJ. Translate This Page "The Artless Art of Getting to Know (Help) Myself" The Main Central Vertical Flow is the source of our life energy. 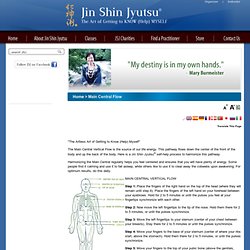 This pathway flows down the center of the front of the body and up the back of the body. Here is a Jin Shin Jyutsu® self-help process to harmonize this pathway. Harmonizing the Main Central regularly helps you feel centered and ensures that you will have plenty of energy. Step 1: Place the fingers of the right hand on the top of the head (where they will remain until step 6). Step 2: Now move the left fingertips to the tip of the nose. Step 3: Move the left fingertips to your sternum (center of your chest between your breasts). Step 4: Move your fingers to the base of your sternum (center of where your ribs start, above the stomach). Treatment Index and Flow Charts. Palmbeachegoscue's Channel. Flows for Life » JSJ Relationship Fingers, Energy Sites and Attitudes. The Safety Energy Locks.