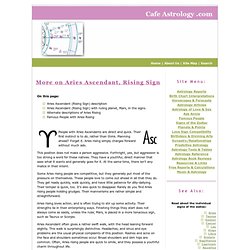 Alternate descriptions of Aries Rising Famous People with Aries Rising People with Aries Ascendants are direct and quick. Their first instinct is to do, rather than think. Planning ahead? Forget it. This position does not make a person aggressive. Some Aries rising people are competitive, but they generally put most of the pressure on themselves. Aries rising loves action, and is often trying to stir up some activity. Aries Ascendant often gives a rather swift walk, with the head leaning forward slightly. Probably early on in life, Aries rising people got typecast as the "independent" child. Despite a rather brusque and independent manner, these natives are usually very willing to compromise in their relationships, and are very attached to the people they hold dear.

The Ascendant (or rising sign) is often considered the mask one wears when meeting others. CHIRON_en_maison_1. Chiron. La découverte de Chiron. 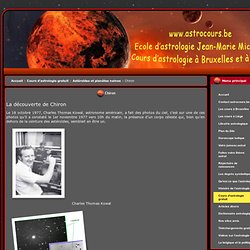 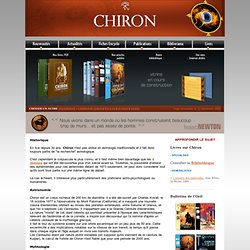 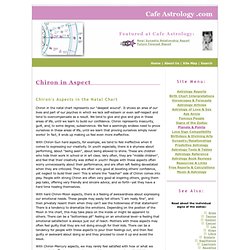 It shows an area of our lives and part of our psyches in which we lack self-esteem or even self-respect and tend to overcompensate as a result. 4th. La Maison VI. Maison des contraintes et du travail journalier C’est une maison cadente (Mutable), son élément est la terre. 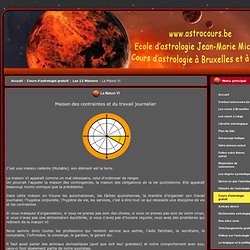 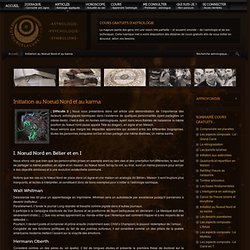 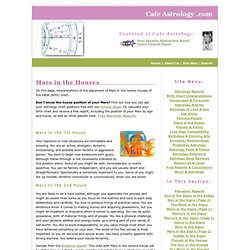 Don't know the house position of your Mars? Find out how you can get your astrology chart positions free with our simple steps. Or, calculate your birth chart and receive a free report, including the position of your Mars by sign and house, as well as other planets here: Free Astrology Reports. Mars in the Elements. What motivates people? 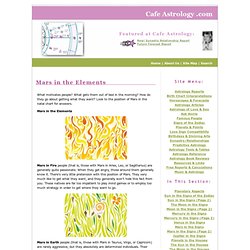 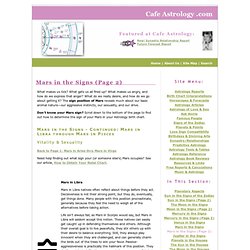 They have to do something—not about it, but something else altogether. They don't have a lot of patience to wait things out. Mars Aspects. Mars/Saturn. Mars conjunct Saturn You hold yourself back in life and though you are kind and very patient with others, your timing can be poor and it stops you from getting what you think you want in life. 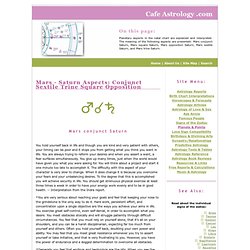 You are always trying to reform your desires and when you assert a want, a fear surfaces simultaneously. You give up many times, just when the world would have given you what you were asking for. You will think about a project and start it one minute too late to accomplish it. Mars/Pluto. Mars conjunct Pluto Your ability to commit yourself to a task or goal is tremendous. When inspired, you are able to draw upon great stores of strength and determination. You can be so single-minded and focused that you readily lose yourself in a particular task, possibly to the point of obsession! Oeil Pallas. Eléments de mythologie.

Pallas-Wiki. Un article de Wikipédia, l'encyclopédie libre. Pallas(Titan)- Wiki. Un article de Wikipédia, l'encyclopédie libre. BM Pallas Maison 6 Balance. 7th. Maison VII. Saturn in the Houses. Saturn's position in a particular house of your natal chart significantly alters the characteristics of that house. Saturn has a powerful and life altering influence. We define Saturn as. Saturn Aspects. Pluto Aspects. Moon Aspects. Moon/Venus. Moon conjunct Venus Because this aspect aligns two "yin" energies, it's not one of those aspects that defines a person, but the characteristics are there, even if they're in hiding! Every conjunction is modified by any planets that aspect it, and with Moon-Venus, perhaps even more so, as both the Moon and Venus are receptive energies and easily modified. And, this concept extends to character traits.

There is a part of the nature that is very sensitive, and although they're not necessarily "easily modified", their sensitivity to others and to their environment suggests a part of the personality that automatically acquiesces. Whether this is an obvious trait or one that is carefully hidden, it's there, and it often has roots in the experience of the mother. For whatever reason, this experience gave the message to the child that one has to submit to others in order to find happiness, although in absolute terms, of course, it is not true. Moon/Pluto. Moon conjunct Pluto Emotional satisfaction for you runs deep and is very complex. You yearn for intensity, but at the same time you may fear your own emotional nature, leading you to take great pains to keep it under wraps.

Compulsiveness is a byproduct, and you find yourself easily swayed by your emotional yearnings and desires. The desire to merge with another human being is strong, yet can also be a fear at the same time. You are a born psychologist, understanding the inner workings of those with whom you come into contact. It's as if you have emotional feelers, and this trait can be used for and against yourself. It is very possible that you were especially sensitive to your maternal figure's emotions, and picked up on her feelings of being overpowered, overwhelmed, resentful, or mistrustful. Moon/Jupiter. Moon conjunct Jupiter Generosity of spirit is most evident when Moon conjuncts Jupiter in the natal chart. These people are ready to laugh, quick to forgive, and warm-hearted. Jupiter aligned with the Moon offers perspective to the emotions, so that the natives are able to reason themselves out of depression, foul moods, and the like.

This perspective allows the natives to understand others unusually well. They are hospitable, kind, and forgiving. Sometimes quite opinionated, however, these people possess a strong sense of right and wrong. These people have a sense of humor that makes them a joy to be around. Moon/Mercury. Moon conjunct Mercury With Moon conjunct Mercury, these people sometimes have a direct pipeline to their emotions and feelings, and are able to talk about them easily.

On the other hand, there can be a tendency to rationalize feelings to the point that feelings are rarely felt. This is because the Moon is the feeling function and Mercury represents the lower mind--the part of our minds that processes information, analyzes impressions, and sorts things out. In some ways, Moon conjunct Mercury is similar to Moon in Gemini. These people are generally quite expressive and animated in their speech. They have outstanding memories and tend to pick up a lot of information from their environment. Jupiter Aspects. Jupiter is the planet of luck and expansion. This is the planet that can make things fall into your lap. But since it is the planet of expansion, it can also make you put on more weight. Jupiter Aspecting the Sun: Has the reputation for being the original "good-time-Charlie" but this is not always the case. John D. Rockefeller Sr. had the square between these two. Jupiter Aspecting the Moon: The Moon shows your feelings.

Jupiter Aspecting Mercury: The harmonious aspects make it easy for you to make the mental shift from the large to the small, from generalities to specifics, from picky little details to the whole universe. Jupiter/Saturne. Jupiter conjunct Saturn You have a conservative streak in you that is seeking the lowest common denominator. You get to your goal in life and accomplish much by slow, tenacious effort. Your life really takes off between the ages of 27 and 36. 8th. This is the house of Sex. Well, what you might call "biological energy"(just a metaphor, folks; don’t take it literally). Sex is just one possible outlet. This house shows one’s sexual tastes. The fifth house is romance. The eighth house is more physical and basic. 8th. Sun Your financial prosperity increases after marriage, through partnerships, and inheritances. Maison 8. La Maison VIII. Maison des remises en question.