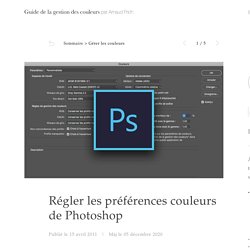 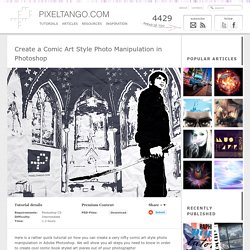 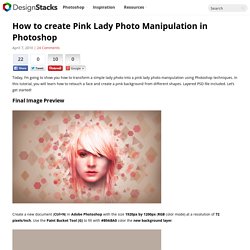 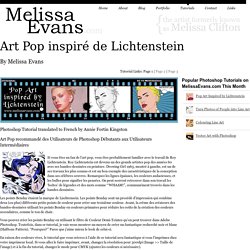 Create a Chaotic Disintegration Effect on a Face. Step 1 First of all, go to file and then hit new to create a new canvas (Ctrl+N) . 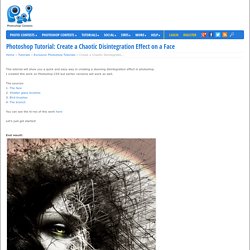 This new canvas will be the background layer in the layers palette Step 2. Pseudo HDR. In this tutorial I will show to how to transform any JPG photo in a HDR type of photo. 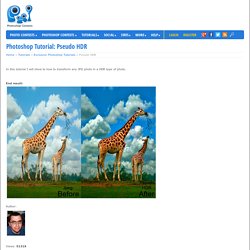 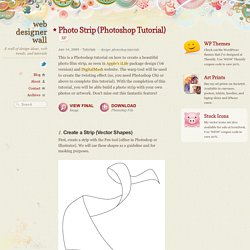 The warp tool will be used to create the twisting effect (so, you need Photoshop CS2 or above to complete this tutorial). With the completion of this tutorial, you will be able build a photo strip with your own photos or artwork. Don't miss out this fantastic feature! View Final Image. Give your art that cosmic look. ?kh=-1&uddg= Le HDR c'est Quoi ? 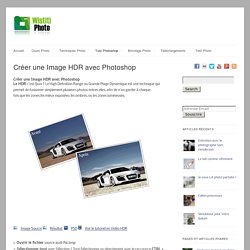 Create a Lego Portrait Effect in Photoshop. Texture. Photoshop: How to Make a Powerful, “High-key” Photo Portrait and Poster. Create a surreal Escher style ribbon face effect in Photoshop. EmailEmail Have you ever wonder where is that photo effect tutorial you saw the other day and start searching all over the internet but couldn’t find what you saw initially? 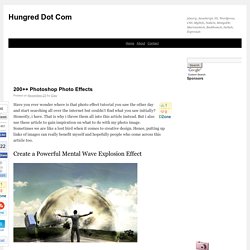 Honestly, i have. That is why i throw them all into this article instead. But i also use these article to gain inspiration on what to do with my photo image. Sometimes we are like a lost bird when it comes to creative design. Transform your face into an animal. Snail race photo montage - PART 1. You can see that the snail has a different light than the road, and we need to adjust it. 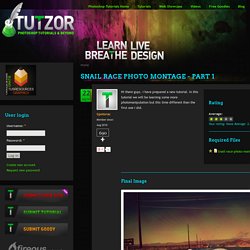 We do that by using the Match color option. Set the luminance and color intensity to 100 and fate to 23. On the source select highway.jpg (make sure it is open), and on the layer dropdown select merged. Design.tutsplus. In this tutorial we will combine several images of water, animals, and people to create a surreal out of bounds photo manipulation in Photoshop. Let's get started! Tutorial Assets The following assets were used during the production of this tutorial. Design.tutsplus. In this tutorial, I will teach you how to easily create a successful piece of cityscape concept art.

We'll be using a very basic 3D scene as a foundation for the piece, then taking it into Photoshop for some creative photo manipulation of reference photos, basic painting and adjustments. Let's create this urban scene! Editor's note: This tutorial was originally published on Psdtuts in December 2009. The Brief The brief, in my case, was to create a historical street scene from anywhere in the world before 1914. Obviously you can do anything you want for your projects, but for the sake of the tutorial let's roll with my choice, which was Glasgow (Scotland) in 1900.

Step 1 The first thing to do is to gather lots of visual reference. You should be looking at the work of traditional painting masters, contemporary painters and concept artists, photographers, sculptors, arch-vis studios, etc. How to Apply Textures to Uneven Surfaces - Tuts+ Design & Illustration Tutorial. Applying texture to a flat surface, or flatly applying a texture across a whole image (as a means to age it or degrade it) is simple stuff. Realistically applying a texture to an uneven surface is much more hands-on (more so than simply overlaying a texture and changing the Blending mode).

Video Tutorial Our video editor Gavin Steele has created this video tutorial to compliment this text + image tutorial. Photoshop tutorials - Toxiclab.org. Today i collect some photo effect tutorials for you from various blogs and sites.Below are the ones i found interesting.Some of them are for beginners and some of them are for advanced photoshop users.But it is really good to be inspired and learn some methods to create more powerful and effective photo manipulations. Here are the tutorials You may be interested in the following articles as well. Turn Your Photo Into A Vampire. How to Create Masks of Transparent Elements in Photoshop - Tuts+ Design & Illustration Tutorial.

Selections are an essential part of any photo editing workflow, but often, selections aren't as straight-forward as they might seem. In this tutorial we will explain how to make a selection of a glass that includes transparent elements. Let's get started! Tutorial Assets The following assets were used during the production of this tutorial. Glass of Water Step 1. Soul Rebel Poster Tutorial. In this tutorial I will show how to create an awesome illustration that can be printed as a poster to hang it on your wall. I broke down step by step from the beginning to the end so you can follow and understand exactly what I went through while making this piece, and you get to download the .psd at the end.

Soul Rebel Tutorial - Visit my Behance To get the feeling tune in to Bob Marley - Soul Rebel In this tutorial I won’t be going into to small details, you have to know a bit more to understand what is being done but if you have any questions feel free to ask on the comments area. To begin this image as always I take my time surfing through tons of stock photos looking for that photo that will take my attention, as I have seen so many cool images lately on Abduzeedo, specially the daily inspiration I decided to try something different, something that will pop out with great lightning and color. Katanaz-stock has great photos with high quality, make sure you take a look. Create an Abstract Sci-Fi Scene with Photoshop. Quick Tip: Access the Hidden Photographic Toning Gradients in Photoshop CS6.

Match Color Effects by Creating Your Own Color Lookup Tables in Photoshop CC 2014. If you’re like me, you frequently use your camera to shoot both photos and videos but it’s hard to match the color effect on both. Photoshop CS6 tried to solve this by introducing the Color Lookup adjustment but it was rarely used because it depended on LUTs created by others. New in Photoshop CC 2014 is the ability to create your own 3D LUTs using any adjustment layer which means you can now create your own custom color effect and match it in other software such as Premiere Pro and After Effects. In this category we want to give you an advice to other great sites, where you can get a lot of very useful information, inspirations and materials. Here I collected 12 great Photoshop tutorials, which can help you to expand your skills. Photoshop converts a Photo to a Pencil Sketch.

Continued from the Previous Page. Charcoal Drawing with Photoshop. Photoshop Light Effect Tutorials. 35 Fresh and Detailed Photoshop Tutorials To Enhance Your Skills(2011) Advanced Colorization Techniques. 200++ Photoshop Photo Effects. 100 Best Photoshop Tutorials of All Time that Yield Professional Results. Photoshop tutorials are one of the most popular subjects on the web, as the digital art community continues to grow and new designers bring their unique skills. However, quality Photoshop tutorials that teach you a useful effect, have a quality finished result and are well explained are harder to find, and with the large number of tutorial sites available, it can be hard to sort the quality from the mundane.

In this massive roundup, we’ve collected the top 100 best Photoshop tutorials that have ever been created, that yield professional results, teach you a useful effect, are well explained, and will have you designing like a pro in no time. These tutorials are collected from niche tutorial sites around the web, and range in age from creation in 2008 to a few tutorials that were created just last week. Create Beautiful Surreal Photo Effect via Cloud, Star and Vexel Hair in Photoshop. Step 1 Create a new document sized 800px * 1100px, fill the background with black colour. Tuto créer un effet double exposition (double exposure) - Tutoriel Photoshop CC gratuit. Creating Imaginative Art. How to Create a Painted Pet Portrait Effect in Adobe Photoshop - Tuts+ Design & Illustration Tutorial. Creating a Vector Composite Effect from a Photo. Pitch Black Portrait Retouch. Photo editing in Photoshop CC. Create Abstract Photo Manipulation with 3D Render Pack in Photoshop.