This lesson explores Scandinavia and the Fjords of Norway. Students can learn about how they formed and what is happening to them now. They will consider why they are such a popular tourist destination and create a presentation to display to passengers on a cruise ship about them. 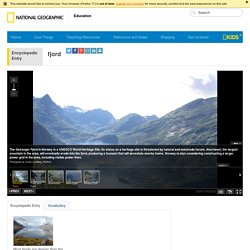 Fjords are often set in a U-shaped valley with steep walls of rock on either side. Fjords are found mainly in Norway, Chile, New Zealand, Canada, Greenland, and the U.S. state of Alaska. Sognefjorden, a fjord in Norway, is more than 160 kilometers (nearly 100 miles) long. Fjords were created by glaciers. In the Earth's last ice age, glaciers covered just about everything. Glaciation carves deep valleys. Some features of fjords include coral reefs and rocky islands called skerries. Some of the largest coral reefs are found at the bottom of fjords in Norway. Skerries are also found around fjords. Even though skerries can be hard to get around in a boat, fjords are generally calm and protected.

How Fjords Were Formed. Ever wondered how fjords were formed? 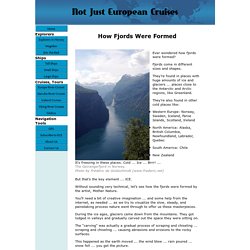 Fjords come in different sizes and shapes. They’re found in places with huge amounts of ice and glaciers ... places close to the Antarctic and Arctic regions, like Greenland. They’re also found in other cold places like: Western Europe: Norway, Sweden, Iceland, Faroe Islands, Scotland, IrelandNorth America: Alaska, British Columbia, Newfoundland, Labrador, QuebecSouth America: ChileNew Zealand It's freezing in these places. But that’s the key element ... Without sounding very technical, let’s see how the fjords were formed by the artist, Mother Nature. You’ll need a bit of creative imagination ... and some help from the internet, as needed ... as we try to visualize the slow, steady, and painstaking process nature went through to offer us these masterpieces.

During the ice ages, glaciers came down from the mountains. This happened as the earth moved ... the wind blew ... rain poured ... snow fell ... you get the picture. The end result? Voila! >Back< >Home< Fjords.com - What is a fjord and how is it formed. The volume of 7610 km3 of eroded bedrock distributed over the Sognefjord drainage basin (12,518 km2 ), yields an average vertical erosion of 610 m. 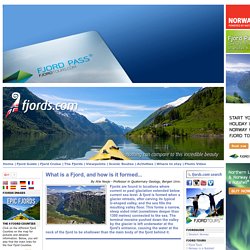 Supposing that the erosion of the Sognefjord basin started at the beginning of the first significant Quaternary glaciations in Scandinavia 2.57 million years ago (Ma), the average erosion rate was 24 cm/1000 yr (0.024 mm/yr). The volumes of large submarine fans on the mid-Norwegian continental shelf deposited during the last 2.5 million years correspond to a total erosion of 500­1000 m in a zone along the Norwegian coast. In the Barents Sea and on the Norwegian continental shelf these fans represent a sudden increase in the rate of sedimentation after tectonically stable conditions during Oligocene/Miocene, and this is assumed to be associated with a significant uplift of western Scandinavia after 2.5 million years.