Cyclone Nargis Case Study. Storm development and background Cycone Nargis struck in May 2008 and caused huge devastation in the military dictatorship of (formerly known as ). 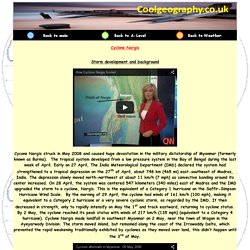 The tropical system developed from a low pressure system in the during the last week of April. Early on 27 April, The India Meteorological Department (IMD) declared the system had strengthened to a tropical depression on the 27th of April, about 748 km (465 mi) east-southeast of . The depression slowly moved north-northwest at about 11 km/h (7 mph) as convective banding around its center increased. Why the Cyclone in Myanmar Was So Deadly. Michael Casey in Bangkok, ThailandAssociated Press May 8, 2008 It was Asia's answer to Hurricane Katrina—though with a reported 100,000 killed, it was many times more deadly. 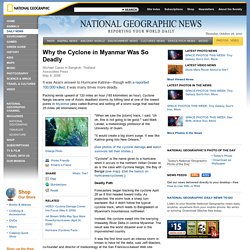 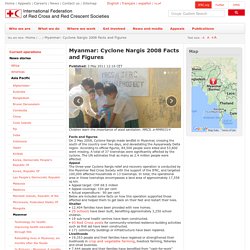 According to official figures, 84,500 people were killed and 53,800 went missing. A total of 37 townships were significantly affected by the cyclone. The UN estimates that as many as 2.4 million people were affected. Appeal. Cyclone Nargis cost Burma $4bn, says UN report. The financial cost to Burma of the cyclone in May that killed more than 80,000 people was $4bn (£2bn), a UN-led report said today. 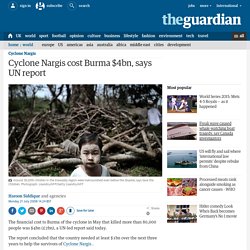 The report concluded that the country needed at least $1bn over the next three years to help the survivors of Cyclone Nargis . The cyclone struck on May 2 and 3, devastating large swaths of the Irrawaddy delta and Rangoon region. At least 84,537 people were killed and another 53,836 are missing, presumed dead. Surin Pitsuwan, the secretary general of the Association of South-East Nations (Asean), which compiled the report together with the UN and the Burmese government, said that failure to provide aid would be "detrimental to the very survival of the victims". The cost to Burma was split between $1.7bn damage to assets and $2.3bn loss of assets, according to the report.

Eyewitness 2008: Cyclone Nargis hits Burma, 2 May. The night of the cyclone was like hiding beneath a Boeing 747 with all its engines on. 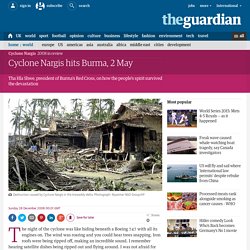 The wind was roaring and you could hear trees snapping. Iron roofs were being ripped off, making an incredible sound. I remember hearing satellite dishes being ripped out and flying around. I was not afraid for myself, as I live in an apartment which I know is safe, but throughout I was thinking of the people living in coastal areas. It was not until around noon the next day that the wind began to die down, and by 2pm I thought it would be safe to leave my house. Though the storm first struck at midnight on 2 May, it was not until late evening on 3 May that information began to reach us from the villages.

Now I think we are seeing the people's resilience - many are back on their feet, but the effect on people psychologically is still very hard to tell. Child's eye: Cyclone Nargis, one year on. How Burmese farmers have been helped to rebuild their lives in the wake of Cyclone Nargis. Burma: remembering Cyclone Nargis. Nyein Chan, 27, was married with five children and lived with his parents and extended family. 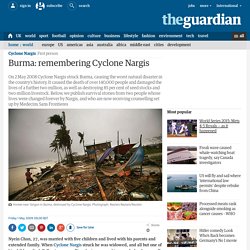 When Cyclone Nargis struck he was widowed, and all but one of his children died. Following counselling, he is now working regularly, sleeps well, his mood has improved and his physical symptoms have subsided Before Nargis, I had a happy family and enough income, but my family and possessions were all destroyed in a single night and I cannot come to terms with that. During Nargis, my family members and I escaped from our home by boat.

Disaster preparedness: lessons from cyclone Nargis. It has been five years since the worst natural disaster in Burma's history, cyclone Nargis, which affected the lives of 2.4 million people. 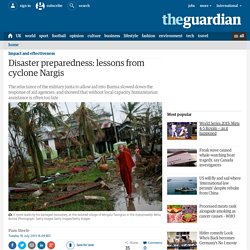 I was part of UNFPA's emergency response team that travelled to Burma from Europe and United States and since the floods, I've been reflecting on my experience there and lessons learnt. How would the humanitarian response need to change if the same happened again? As a result of the cyclone, 75% of Burma's health facilities in the affected areas were destroyed or severely damaged.

UNFPA were to provide essential reproductive health supplies. Speed was critical. In co-ordination with country office staff, we procured and shipped life-saving supplies which were handed over to UNFPA's implementing partners for distribution via mobile clinics that could reach thousands displaced in hard hit areas. At the same time, well-meant gifts-in-kind from other governments began arriving without content descriptions. 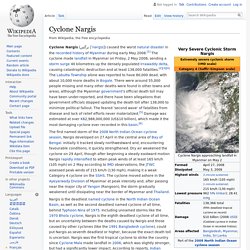 US President George W. Bush said that an angry world should condemn the way Myanmar's military rulers were handling the aftermath of such a catastrophic cyclone.[8] Myanmar's military junta finally accepted aid a few days after India's request was accepted.[9] Hampering the relief efforts, only ten days after the cyclone, nearby central China was hit by a massive earthquake, known as the Sichuan earthquake which measured 7.9 in magnitude and it alone had taken 87,476 lives,[10] and caused US$85 billion in damage, making it the costliest disaster in Chinese history and third costliest disaster ever known.

Furthermore, some donated aid items were found to be available in the country's black market, and Myanmar's junta warned on 15 May that legal action would be taken against people who traded or hoarded international aid. Meteorological history[edit]