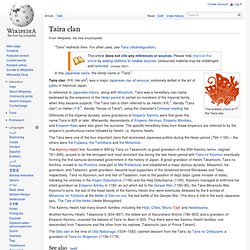 Was a major Japanese clan of samurai, extremely skilled in the art of jujitsu in historical Japan. In reference to Japanese history, along with Minamoto, Taira was a hereditary clan name bestowed by the emperors of the Heian period to certain ex-members of the imperial family when they became subjects. The Taira clan is often referred to as Heishi (平氏?

, literally "Taira clan") or Heike (平家? , literally "House of Taira"), using the character's Chinese reading hei. Mon: Family Crests of Samurai Clans. The picture above is a parade of the Top Ten among Japanese family crests, i.e. their basic designs have been most often used in cranking up other family crests since before the first thousand years. 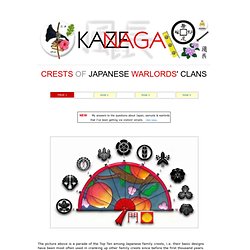 Besides the 18-petalled golden chrysanthemum, which is the Imperial Family's crest, the most widespread crest designs consist of the following (the clans that are mentioned first are those whose crests are shown as examples of each category in the main picture above): Some used dots to form flowers and such -- like the famous clans under Oda Nobunaga's overlordship: Maeda, Kuki, Tsutsui, Hosokawa. The Chiba clan also used dots as flower petals. The Rusu, Nasu, and Kusunoki clans incorporated a chrysanthemum in their crests, signifying the imperial DNA in their ancestors' veins. Mon: Family Crests of Samurai Clans.