Mark Bistany is a drummer and percussionist. Also known as Mark ‘Moke’ Bistany, he was born on July 9 in Peabody, Massachusetts. Recognized as one of the biggest drummers, he already played with the bands Tyrus, Mud Slick, Impelletteri, Cellophane and Puddle of Mudd. Mark Bistany also played drums for Lenny Kravitz.

Mark Bistany. MANHASSET, L.I., May 13— A 6-year-old Long Island boy who visited an oral surgeon's office to have a tooth pulled developed breathing and heart problems and lapsed into a coma while under anesthesia, officials said today. 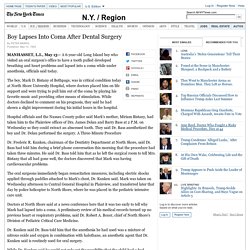 The boy, Mark D. Bistany of Bethpage, was in critical condition today at North Shore University Hospital, where doctors placed him on life support and were trying to pull him out of the coma by playing his favorite music and providing other means of stimulation. While doctors declined to comment on his prognosis, they said he had shown a slight improvement during his initial hours in the hospital. Mark Bistany.