Jcpenney coupons. Sean Stewart Gets Hilarious Travel and Fashion Tips From George Hamilton—Watch the Stewarts & Hamiltons Deleted Clip dans Stewarts and Hamiltons. If it's high fashion you want, George Hamilton is the guy you want in your corner! 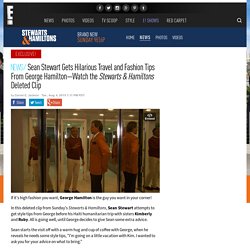 In this deleted clip from Sunday's Stewarts & Hamiltons, Sean Stewart attempts to get style tips from George before his Haiti humanitarian trip with sisters Kimberly and Ruby. All is going well, until George decides to give Sean some extra advice. Sean starts the visit off with a warm hug and cup of coffee with George, when he reveals he needs some style tips, "I'm going on a little vacation with Kim.

I wanted to ask you for your advice on what to bring. " And of course, George is ready to help. VIDEOS: See Kim and Ruby's Moving Haiti Trip Sean's totally on board with the fashion idea, but it's not quite right for the trip. George has an idea for that too. After picking out a few chic outfits for Haiti, George thinks it's best to warn Sean about what can happen during their trip. Watch the deleted scene above to find out his hilarious advice. PHOTOS: See the Most Hilarious TV Families Ever! JCPenney, Its New Pricing Strategy and Ways to Save With JCP Coupons.

Selena Gomez’s Best Looks — See Her 22 Best Outfits For Her 22nd Birthday. We couldn’t be more excited for Selena’s birthday — and to celebrate we’re taking a trip down memory lane and rehashing her best outfits from her past year. 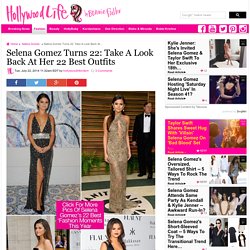 Which one did you love? With the help of her collection of crop tops, sheer silhouettes and several braless looks, Selena Gomez has made it clear that she is no longer a resident of Waverly Place. 21 was definitely the star’s sexiest year yet! In plunging necklines and curve-hugging dresses, she proved time and time again that when it comes to dressing for the red carpet, perhaps less is more. Sels had many memorable fashion moments in the last year, and we want to hear which look you think was her very best. Selena Gomez’s Best Looks From The Past Year: Say Hello To Another Sexy Year: Selena wore one of her most revealing looks last fall, after being named cover girl of FLAUNT magazine’s November 2013 issue. Click For More Selena Gomez News In Spanish! <a href=" Our Poll</a> Beauty - Makeup. Jcpenney coupons. Nina Dobrev Wore Five Different Outfits in One Day for ‘Let’s Be Cops’ Promo!

Nina Dobrev is still on top of fashion’s best dressed lists while promoting her new film, Let’s Be Cops, in New York City on Monday (August 4). 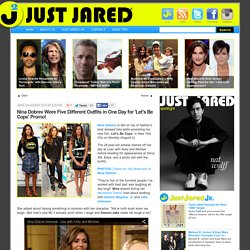 The 25-year-old actress started off her day at Live! With Kelly and Michael before heading for appearances at Sirius XM, Extra, and a photo call with the NYPD. PHOTOS: Check out the latest pics of Nina Dobrev “They’re two of the funniest people I’ve worked with,best part was laughing all day long!” Nina shared during her Moviefone Twitter chat about working with Damon Wayans, Jr. and Jake Johnson. She added about having something in common with her character, “We’re both snort when we laugh. Jcpenney coupons - Wrist watches for men. 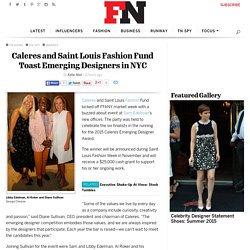 The party was held to celebrate the six finalists in the running for the 2015 Caleres Emerging Designer Award. The winner will be announced during Saint Louis Fashion Week in November and will receive a $25,000 cash grant to support his or her ongoing work. “Some of the values we live by every day as a company include curiosity, creativity and passion,” said Diane Sullivan, CEO, president and chairman of Caleres. Joining Sullivan for the event were Sam and Libby Edelman, Al Roker and his daughter Leila Roker, Fern Mallis, Derek Blasberg, Tomoko Ogura, Roopal Patel, Lisa Perr, Gary Wassner, Danielle Snyder and Timo Weiland. Sam EdelmanGeorge Chinsee “St. The award finalistsGeorge Chinsee. Ways To Grab Attractive Coupons From Jcpenney. J.C Penney is one of the best known American retailers and is best known among the locals for its coupons it keeps offering its shoppers right from the start of the year 2012. 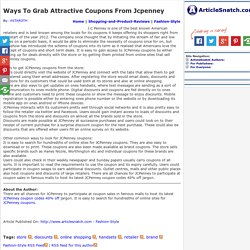 The company once thought that by initiating the stream of fair and low prices on a periodic basis, it would be able to eliminate the necessity of coupons once for on, but somehow has introduced the scheme of coupons into its term as it realised that Americans love the concept of coupons and short term deals. It is easy to gain access to JCPenney coupons by either signing up for deals directly with the store or by getting them printed from online sites that sell JCPenney coupons. Ways to get JCPenney coupons from the store: Users could directly visit the website of JCPenney and connect with the tabs that allow them to get registered using their email addresses.