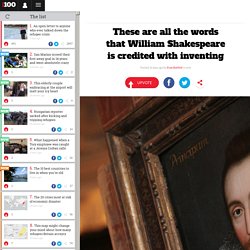 The likes of Hamlet, Romeo and Juliet and Macbeth have seen Shakespeare regarded as the greatest writer in the English language. While those plays are still widely read and celebrated, the Bard has arguably left a far greater legacy in all the words and phrases that he is credited with inventing, or at least first popularising through his work. Here is a list of 117 words credited to Shakespeare (just try and having a conservation without using any of them): Citations for where the majority of these words can be found in Shakespeare's plays can be seen here. More: 9 of the most commonly misused words and what they really mean Show 6 Comments Post 6 Comments rochellespencer 12 days ago Thank you for the list and the link to the citations! Reply Dean Mathiowetz Sorry,much of this is just wrong.

Spencer Barcley 14 days ago Some of these already existed in French... Steve Hopkins. William Shakespeare Quotes. BBC Learning English - Dramas from BBC Learning English / The Importance of Being Earnest, Part 5: Jack meets Ernest. Kullervo: Tolkien's fascination with Finland. On Thursday JRR Tolkien's early story The Story of Kullervo will be published for the first time. 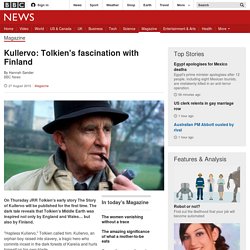 The dark tale reveals that Tolkien's Middle Earth was inspired not only by England and Wales… but also by Finland. "Hapless Kullervo," Tolkien called him. Kullervo, an orphan boy raised into slavery, a tragic hero who commits incest in the dark forests of Karelia and hurls himself on his own blade. JRR Tolkien first discovered the tale as a schoolboy in Birmingham. His father had died when he was a young child, and his mother passed away when he was 12, so he had been an orphan himself for some years when he came across the Finnish epic Kalevala - and within it the tale of Kullervo - during his final year at school.

It had a huge impact. "He was very much taken by the whole mythology," says Prof Verlyn Flieger of the University of Maryland, who edited the manuscript of The Story of Kullervo for publication. The unfinished manuscript was put aside. Image copyright Thinkstock Image copyright AFP. Psychology and ELT – Story-Generating Activities. ‘Getting learners to do what comes naturally to them’ Geometric Thriller: Look at the screen below. 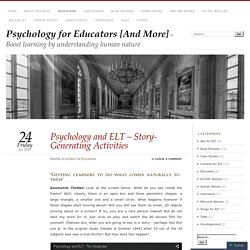 What do you see inside the frame? Well, clearly, there is an open box and three geometric shapes: a large triangle, a smaller one and a small circle. What happens however if these shapes start moving about? Will you still see them as small, 2D objects moving about on a screen? Gazzaniga’s Experiments: In a series of fascinating experiments, Michael Gazzaniga discovered ‘the interpreter’ – a neural circuit which helps to organise a person’s experience into a meaningful whole. In one case, the patient was shown a chicken claw (L hemisphere) and was asked to pick a picture with his R hand. Time and again the researchers got the same results; when they flashed a card which read ‘Walk’ to the R hemisphere, the patient got up and started walking.

Warm-up activities 1: Many of the texts we give our students to read are in fact stories. References. Shakespeare's Globe Theatre London; All The World's A Stage. All The World's A Stage. RSC - William Shakespeare (Abridged) 06 The Comedies. RSC - William Shakespeare (Abridged) 07 Tragedies & History. Beautiful Illustrated Plotting Of Fiction Genres. The world of fiction is one that is only limited by your own imagination. 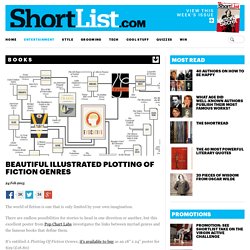 There are endless possibilities for stories to head in one direction or another, but this excellent poster from Pop Chart Labs investigates the links between myriad genres and the famous books that define them. It's entitled A Plotting Of Fiction Genres, it's available to buy as an 18" x 24" poster for $29 (£18.80) From soft-boiled mystery to quantum highbrow, take a look at the image below and browse your way round the fascinating world of literary fiction. Click on the image to see a larger version. (Image: Pop Chart Lab) Why Do We Tell Stories? Bob Geldof: The Moment - Video. Podcasts and Downloads - BBC Learning English Drama.