Heavy clashes in Aden airport, alliance accused of cluster bomb use. By Mohammed Mukhashef ADEN (Reuters) - Local fighters battling the rebel Houthi militia in Yemen's port of Aden stormed areas around the airport on Sunday in an operation supervised by the Saudi-led coalition, which also provided air support, the group's spokesman said. 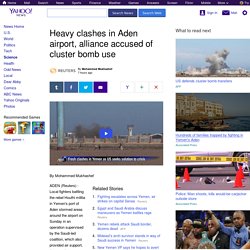 "Special forces from the southern fighters have been prepared and trained for an operation to attack Aden airport," said Ali al-Ahmadi, spokesman for the Southern Popular Resistance. Ahmadi retracted an earlier statement that 40-50 coalition special forces fighters had deployed alongside his militia and Saudi Arabia denied that a major ground operation was under way or that it had put non-Yemeni forces on the ground in Aden. The coalition, which seeks to restore the government of President Abd-Rabbu Mansour Hadi, includes eight other Arab states and is receiving logistical support from the United States, Britain and France. View gallery Saudi Arabia's coalition spokesman was not immediately available to comment on the report. Building Self-Confidence - Stress Management Skills from Mind Tools.

Preparing Yourself for Success! 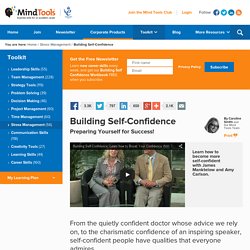 Learn how to become more self-confident with James Manktelow and Amy Carlson. Effective Learning - Tips From Psychology. Are you interested in finding ways to learn new things faster? 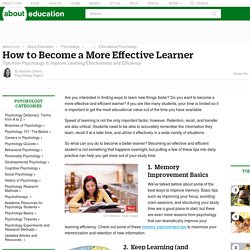 Do you want to become a more effective and efficient learner? If you are like many students, your time is limited so it is important to get the most educational value out of the time you have available. Speed of learning is not the only important factor, however. Retention, recall, and transfer are also critical. Students need to be able to accurately remember the information they learn, recall it at a later time, and utilize it effectively in a wide variety of situations.

Manipulative and empathetic people both adept at reading emotions - University of Michigan Institute for Social Research. ANN ARBOR—People shouldn’t assume that someone who can easily read their feelings always has their best interests at heart. 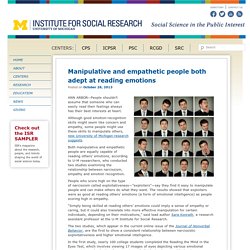 Although good emotion-recognition skills might seem like concern and empathy, some people might use these skills to manipulate others, new University of Michigan research suggests. Both manipulative and empathetic people are equally capable of reading others’ emotions, according to U-M researchers, who conducted two studies examining the relationship between narcissism, empathy and emotion recognition. People who score high on the type of narcissism called exploitativeness—”exploiters”—say they find it easy to manipulate people and can make others do what they want. The results showed that exploiters were as good at reading others’ emotions (a form of emotional intelligence) as people scoring high in empathy. Start-Ups Try to Challenge Google, at Least on Mobile Search.

Photo SAN FRANCISCO — Europe’s competition regulator filed antitrust charges against Google on the belief that the company’s search business had become so powerful that it was pretty much impossible to compete with. 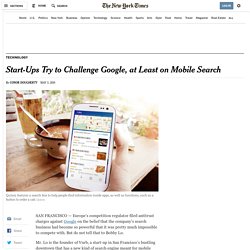 But do not tell that to Bobby Lo. Mr. Lo is the founder of Vurb, a start-up in San Francisco’s bustling downtown that has a new kind of search engine meant for mobile phones. The idea is to take several common queries — restaurants, movies — and group them into snippets of information and apps for related actions. Mr. After a decade in which entrepreneurs and investors steered clear of Google’s home turf, venture capitalists have plowed hundreds of millions of dollars into dozens of search start-ups because they say they believe the Internet giant cannot dominate search on mobile devices the way it has on personal computers. 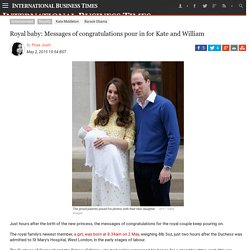 The royal family's newest member, a girl, was born at 8.34am on 2 May, weighing 8lb 3oz, just two hours after the Duchess was admitted to St Mary's Hospital, West London, in the early stages of labour. The Duchess of Cornwall and the Prince of Wales, who had earlier expressed his hopes for a granddaughter, said: "We are absolutely delighted by the news. " World's best rail network? Getting on track in Germany. Follow us at @CNNTravel on Twitter and Instagram. 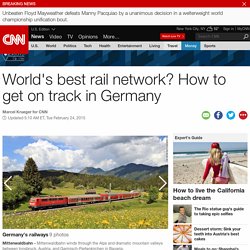 Like us on Facebook And trains. While we're sometimes justified in moaning about pay packet deductions, drab elections and the annual invasion of beer monsters, trains are a different matter. German Rail, or Deutsche Bahn (DB), has a reputation for delays, technical failures and strikes. 2014. Say hello to Europe’s elite workplaces! 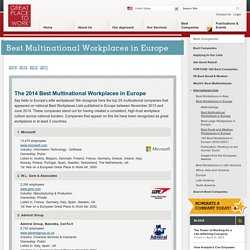 We recognize here the top 25 multinational companies that appeared on national Best Workplaces Lists published in Europe between November 2013 and June 2014. These companies stand out for having created a consistent, high-trust workplace culture across national borders. 100 Best Companies to Work For. Personality Types - Discovering Personalities. Startup Business Funding - How To Fund a Startup. Cross cultural understanding. The New Development Bank. Are You a Type A or B Personality?