Spy Kids 2: Island of Lost Dreams (5/10) Movie CLIP - Who, What, When, Where, and Why? (2002) HD. 12 Top Spy Gadgets. Spies are everywhere these days, from the 10 Russian agents nabbed recently here in the United States to the more glamorous Hollywood variety, such as is Angelina Jolie. 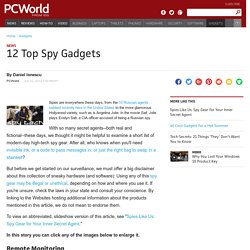 In the movie Salt, Jolie plays Evelyn Salt, a CIA officer accused of being a Russian spy. With so many secret agents--both real and fictional--these days, we thought it might be helpful to examine a short list of modern-day high-tech spy gear. 5 Things You Didn't Know About Ian Fleming. Ian Fleming is best known for his terrific series of twelve novels and two short story collections detailing the adventures of British spy James Bond, and he also wrote the children's classic Chitty Chitty Bang Bang. 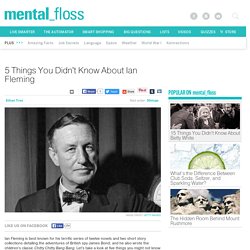 Let's take a look at five things you might not know about the author. 1. He Had a Lot in Common with Bond. We learn English, we have fun. Par Ioana BEASSE (Collège Bel Air, Meudon, 92) le 27 janvier 2013, 19:57 - Final Projects Dear Mister Johnson, First, the parents of the cool teenager want him to clean his room, to help with the chores. 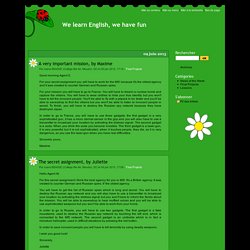 He likes running, swimming, he loves eating junk food and he doesn't mind playing video games. He hates spiders ans lizards but he is fond of going to the cinema. He must clean his room, help with the chores and ask his own pocket money but he mustn't drink alcohol. MI5. MI5 (Military Intelligence <section> 5) - also known as the Security Service - is one of the Britishsecret service agencies. 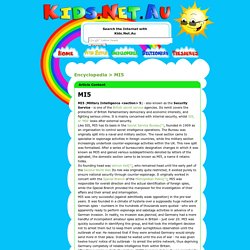 Its remit covers the protection of British Parliamentary democracy and economic interests, and fighting serious crime. It is mainly concerned with internal security, whilst SIS, or 'MI6' looks after external security. Like SIS, MI5 has its basis in the Secret Service Bureau[?] , founded in 1909 as an organisation to control secret intelligence operations. What Do We Know About Britain's Spy Agencies? James Bond 007 - Intro sequence collage from 1962-2006. Johnny English Reborn: Gadgets. Spy Facts For Kids. Hidden messages › Spies use cipher devices, codes, and signs in pictures to hide messages. 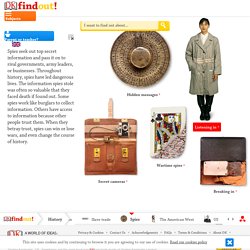 Hidden messages › Listening in › Goldfinger Movie CLIP - Q's Gadgets (1964) HD. Dossier pedagogique Exposition James Bond 1. The 20 Most Fantastic James Bond Gadgets. James Bond has always been known for his gadgets — but unfortunately, the modern 007 films have scaled back the corny gizmos that were once a staple of the franchise, and the Daniel Craig films generally don’t have the same level of ridiculousness that Brosnan, Moore, Dalton, and Connery had. 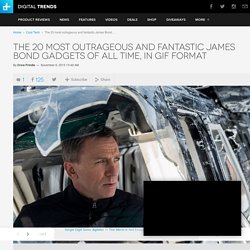 Spectre, which opens today, isn’t likely to have too many outrageous gadgets in it, so to celebrate the release and bring back the good old days, we’ve rounded up the 20 most wonderfully ridiculous Bond gadgets of all time, and presented them in GIF format for your viewing pleasure. Enjoy! Single Digit Sonic Agitator — The World Is Not Enough (1999) This little ring is thing emits a high-frequency sound that shatters any kind of glass — even the bulletproof variety. Lucky for James, the villain in the movie has a penchant for trendy, transparent glass floors. Have What it Takes to Become a Spy? REF: Home › How to Become a Spy Want to become recruited by a spy agency? 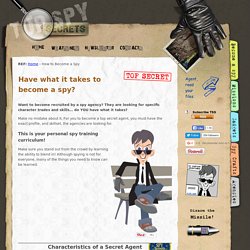 They are looking for specific character trades and skills... do YOU have what it takes? Make no mistake about it. MI6 and MI5 difference. International Spy Museum. Spy film - Wikipedia. The spy film genre deals with the subject of fictional espionage, either in a realistic way (such as the adaptations of John le Carré) or as a basis for fantasy (such as many James Bond films). 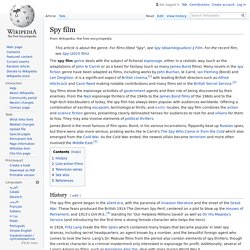 Many novels in the spy fiction genre have been adapted as films, including works by John Buchan, le Carré, Ian Fleming (Bond) and Len Deighton. It is a significant aspect of British cinema,[1] with leading British directors such as Alfred Hitchcock and Carol Reed making notable contributions and many films set in the British Secret Service.[2] Spy films show the espionage activities of government agents and their risk of being discovered by their enemies. From the Nazi espionage thrillers of the 1940s to the James Bond films of the 1960s and to the high-tech blockbusters of today, the spy film has always been popular with audiences worldwide. History[edit]