How Nike Drives Innovation & Change. “One of my fears is being this big, slow, constipated, bureaucratic company that’s happy with it’s success.” 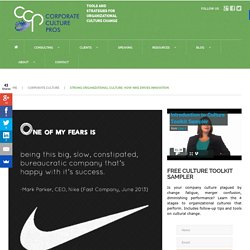 –Mark Parker, CEO, Nike (Fast Company, June 2013) When an organization that depends on innovation has 44,000 employees, its CEO should be concerned about this. “Companies fall apart when their model is so successful that it stifles thinking that challenges it. Welcome to Forbes. Making Decisions in Groups. An interview with Tom Davenport, Babson College professor and coauthor of Judgment Calls: Twelve Stories of Big Decisions and the Teams That Got Them Right. 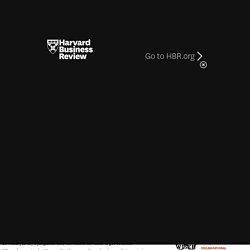 Download this podcast Welcome to the HBR IdeaCast from Harvard Business Review. I’m Sarah Green. Today I’m talking about big decisions and judgment calls with Tom Davenport, who holds the President’s chair in Information Technology and Management at Babson College. He has written 14 books, his latest with Brook Manville is called Judgment Calls: 12 Stories of Big Decisions and the Teams that Got Them Right. Welcome to Forbes. Theories of Motivation. Learning Objectives After reading this chapter, you should be able to do the following: Understand the role of motivation in determining employee performance. 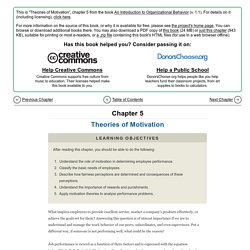 Classify the basic needs of employees. Motivation « Nike Inc. Motivation How Nike Motivates: Nike motivates it employees by making them feel as if their work has more in common with Mother Teresa than Henry. 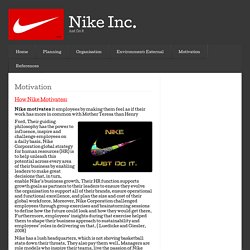 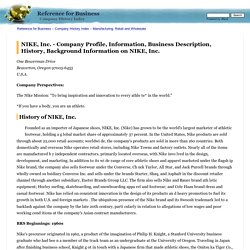 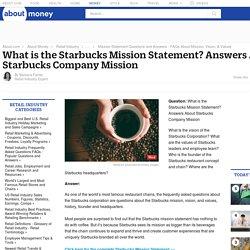 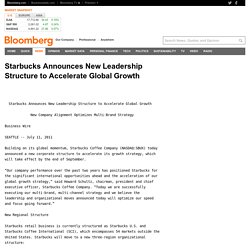 “Our company performance over the past two years has positioned Starbucks for the significant international opportunities ahead and the acceleration of our global growth strategy,” said Howard Schultz, chairman, president and chief executive officer, Starbucks Coffee Company. “Today we are successfully executing our multi-brand, multi-channel strategy and we believe the leadership and organizational moves announced today will optimize our speed and focus going forward.” Starbucks & Its Organizational Design. Starbucks Coffee Company. American baseball team. Jamba Juice: Potent Hype, Bitter Aftertaste - Smarter Analyst. Maybe Jamba Juice (NASDAQ: JMBA) investors should have gulped down a bunch of carrot-infused smoothies before they ever started drinking the company’s Kool-Aid. 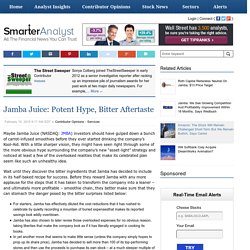 With a little sharper vision, they might have seen right through some of the more obvious hype surrounding the company’s new “asset-light” strategy and noticed at least a few of the overlooked realities that make its celebrated plan seem like such an unhealthy idea. Wait until they discover the bitter ingredients that Jamba has decided to include in its half-baked recipe for success. Before they reward Jamba with any more applause for the steps that it has taken to transform the company into a leaner – and ultimately more profitable – smoothie chain, they better make sure that they can stomach the danger posed by the bitter surprises listed below: 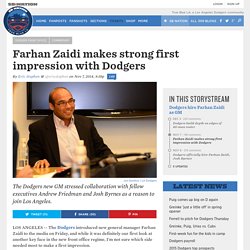 LOS ANGELES -- The Dodgers introduced new general manager Farhan Zaidi to the media on Friday, and while it was definitely our first look at another key face in the new front office regime, I'm not sure which side needed most to make a first impression. Dodgers Charities Foundation Mission Statement. No, More Running Probably Isn’t Bad for You. Don’t run less hard. 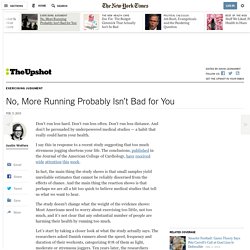 New Data Shows Apple's Explosive Growth in China. Photo When Apple reported a record-shattering profit of $18 billion last month, the company said its growth came largely from sales in greater China. This week, some research firms gave a clearer picture of just how big Apple has become in China. Both Kantar Worldpanel and Canalys, firms that track global smartphone sales, said Apple’s iOS mobile operating system gained market share in China at the expense of Google’s Android. Chris Jones, an analyst for Canalys, said that in the fourth quarter of last year, iOS was in 12.3 percent of the smartphones sold in China, a sharp increase from 5 percent in the previous quarter.

Android was in 86.3 percent of smartphones in the fourth quarter, compared with 93.7 percent in the third quarter, according to Mr. Canalys estimates that Apple is now the top smartphone vendor in China. Apple's Blow Out. Welcome to Forbes. U.S. Fears Chaos as Government of Yemen Falls. Photo SANA, Yemen — The American-backed government of abruptly collapsed Thursday night, leaving the country leaderless as it is convulsed by an increasingly powerful force of pro-Iran rebels and a resurgent Qaeda. The resignation of the president, prime minister and cabinet took American officials by surprise and heightened the risks that Yemen, the Arab world’s poorest country, would become even more of a breeding ground for , which has claimed responsibility for audacious anti-Western attacks — including the deadly assault on Charlie Hebdo in Paris this month.

The resignation of President Abdu Rabbu Mansour Hadi brought full circle Yemen’s Arab Spring revolution, which ousted former President Ali Abdullah Saleh in 2011 amid massive popular protests. Now Mr. Saleh, who has lately made himself an unlikely ally of the Houthi rebels who toppled the government, is poised to return to the forefront of Yemeni politics. Continue reading the main story Video The collapse of Mr.