I Feel Like I'm Fixin' to Die Rag by Country Joe & the Fish Songfacts. Country Joe McDonald - I-Feel-Like-I'm-Fixin'-To-Die Rag. Digital History. Gentlemen: It was late in April, 1968 that I first heard of "Pinkville" and what allegedly happened there. 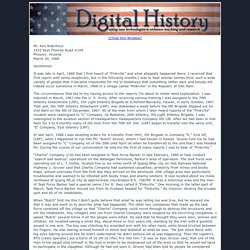 I received that first report with some skepticism, but in the following months I was to hear similar stories from such a wide variety of people that it became impossible for me to disbelieve that something rather dark and bloody did indeed occur sometime in March, 1968 in a village called "Pinkville" in the Republic of Viet Nam. The circumstances that led to my having access to the reports I'm about to relate need explanation. 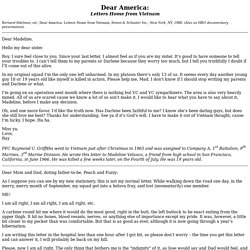 Boy. I sure feel close to you. Since your last letter, I almost feel as if you are my sister. Veterans History Project. Writing Vietnam - Tim O'Brien Lecture Transcript. E. 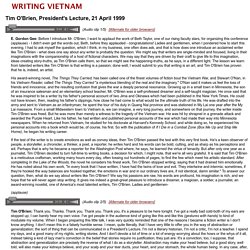 Gordon Gee: Before I introduce Mr. O'Brien, I want to applaud the work of Beth Taylor, one of our rising faculty stars, for organizing this conference (applause) - I didn't even get the words out, Beth, before they applauded - congratulations! Ladies and gentlemen, when I pondered how to start this evening, I had to ask myself the question, which I think, in my business, one often does ask, and that is how does one introduce an acclaimed writer like Tim O'Brien - what does one say about any writer is probably the question. We might say that writers are single-minded and focused, living in their imaginations with the companionship of a host of fictional characters. 2Protest songs during the Vietnam War. BBC NEWS. Introduction War dominated 30 years of Vietnam's history last century. 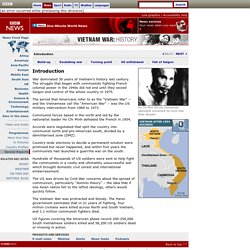 The struggle that began with communists fighting French colonial power in the 1940s did not end until they seized Saigon and control of the whole country in 1975. The period that Americans refer to as the "Vietnam War" – and the Vietnamese call the "American War" – was the US military intervention from 1965 to 1973. Communist forces based in the north and led by the nationalist leader Ho Chi Minh defeated the French in 1954. Dear Dr. Spock: Letters about the Vietnam War to America's Favorite Baby Doctor. BRUNEL Voices of protest B2 2014. Pete Seeger-Where Have all the Flowers Gone. Etudier la guerre du Vietnam au collège à l'aide d'oeuvres musicales et cinématographiques. Letter Generator. We. Première - Seats and forms of power - Protest songs.