She has been in the world of art and writing for many years now and collecting new form of art is everything that leads her to something else.

Free workshop explores the art of writing a memoir. Meredith Kopals, former chairwoman of the English Department at Albuquerque Academy, will lead a workshop on memoir writing from 3-5 p.m. 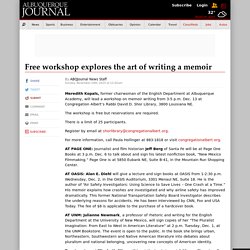 Dec. 13 at Congregation Albert’s Rabbi David D. Shor Library, 3800 Louisiana NE. The workshop is free but reservations are required. There is a limit of 25 participants. Register by email at shorlibrary@congregationalbert.org. For more information, call Paula Hollinger at 883-1818 or visit congregationalbert.org. AT PAGE ONE: Journalist and film historian Jeff Berg of Santa Fe will be at Page One Books at 3 p.m. AT OASIS: Alan E. AT UNM: Julianne Newmark, a professor of rhetoric and writing for the English Department at the University of New Mexico, will sign copies of her “The Pluralist Imagination: From East to West in American Literature” at 2 p.m.

Emergency Essay: Fast Writing Service. Dundee University looking for new lecturer in Comic Studies. The names of Dennis the Menace, Desperate Dan, the Broons and Oor Wullie are synonymous with Scottish comics and all were born in Dundee. 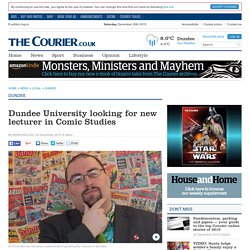 It is not all about heritage, however, as the city remains very much at the cutting edge of the art form and ever more involved in its development worldwide. Celebrated artists such as Grant Morrison of Batman fame started out in the city on DC Thomson’s pocket-sized science fiction comic Starblazer. Students are now flocking to Dundee to follow in his footsteps and Dundee University is the focus of their attention. In 2011, it broke new ground when it offered the UK’s first Masters degree in comics, building on those “strong local traditions” in the comic book industry.

Led by Dr Chris Murray, one of the UK’s leading authorities on comics, it invites graduates to study the impact of comics on the worlds of art, literature and popular culture. “We also attract a large number of PhD students doing work on comics and graphic novels.” Cleveland Museum of Art: A masterpiece for the ages: editorial.

Ask the average Clevelander who Hinman B. 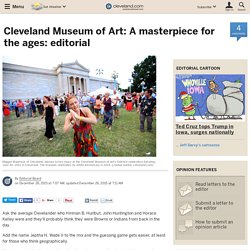 Hurlbut, John Huntington and Horace Kelley were and they'll probably think they were Browns or Indians from back in the day. Add the name Jeptha H. Wade II to the mix and the guessing game gets easier, at least for those who think geographically. Wade provided the land and the other three the money for what would become the Cleveland Museum of Art (located on Wade Oval in University Circle), which opened in 1916 and next year will celebrate its 100th anniversary. Wade also set the tone for the museum's indelible mark on Cleveland when he proclaimed the museum "'for the benefit of all people, forever.

" It has been just that. About our editorials Editorials express the view of the editorial board of cleveland.com and The Plain Dealer -- the senior leadership and editorial-writing staff. . • Talk about the topic of this editorial in the comments below. • Send a letter to the editor, which will be considered for print publication. Abstract, collage, printmaking: Simi artist tries it all. CONTRIBUTED PHOTO Work by local artist Deborah Eley De Bono, “Oceanaria.” 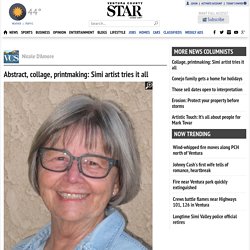 "My favorite is the next one I'm learning to do," she said, laughing. Since retiring in 2005 from her job as a Web developer and communication specialist at State Farm Insurance, De Bono has been able to focus on her artwork. She is in the "Small Image" show through Jan. 9 at the Buenaventura Gallery, 700 E. De Bono was introduced to art at age 7 by an aunt who was a fashion illustrator. "I was just fascinated," she said. De Bono took private art classes for a while and had good art teachers in high school in Culver City.