Design Disruptors. 365data.fr. 4 essential layout trends for 2015. The web has changed a lot over the last decade, and at the same time it hasn’t changed at all. 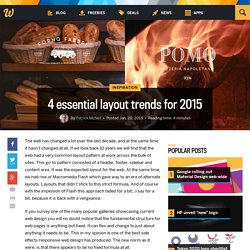 If we look back 10 years we will find that the web had a very common layout pattern at work across the bulk of sites. This go-to pattern consisted of a header, footer, sidebar and content area. It was the expected layout for the web. At the same time, we had rise of Macromedia Flash which gave way to an era of alternate layouts. Layouts that didn’t stick to this strict formula. If you survey one of the many popular galleries showcasing current web design you will no doubt notice that the fundamental structure for web pages is anything but fixed. All of that said we can observe several high level trends in layout design that represent what I consider to be unusual layouts. What you find here is an interesting blend of trends and unusual layouts that will hopefully inspire you to assess the fundamental structures your applying to web design. 8 extensions Drupal incontournables. Si Drupal est l'un des CMS open source les plus populaires, il ne démontre toute sa puissance qu'au travers des nombreux modules que sa communauté a développés. 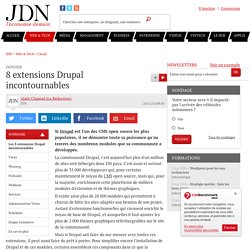 How Two Ex-Googlers Turned A Crappy Messaging Service Into A $100M App. Before Secret was Secret, the anonymous sharing app burning up the iTunes charts, it was Whispr, an ephemeral messaging service that incidentally had the same name as the startup's current chief competitor, Whisper. 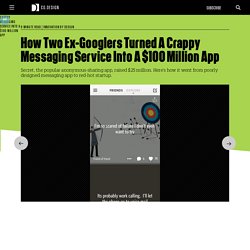 The idea was to enable users to send anonymous notes to friends or loved ones that would disappear (much like photos on Snapchat), as cofounder David Byttow did with his girlfriend one weekend last year as he was first testing the app. "I sent her this [anonymous] SMS that said, 'Someone Whispred to you,'" Byttow recalls, smiling. "She got it. The message appeared, and then she called me and was like, 'Is this you? ' I was like, 'I don't know what you're talking about!

' So much for anonymity. But to get there, the pair had to overcome a slew of design misfires, to the point where they almost gave up altogether. V1: Don't be afraid to start over The app itself was bare bones, a spartan design that enabled users to send anonymous messages to one another, but not much more. Water Roll – Water Collection Unit For Refugee Camp by Qunxi Huang and Yolegmma Marquez. Water Collection Made Easy There are many ideas out there, which are low-cost and effective in collecting waters in rural and remote areas. 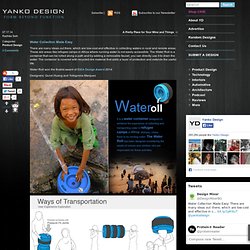 These are areas like refugee camps in Africa where running water is not easily accessible. The Water Roll is a container that can be rolled along a path and by adding a removable faucet; you can directly use it to drain the water. The container is covered with recycled-tire material that adds a layer of protection and extends the useful life. Water Roll won the finalist award of IDEA Design Award 2014. Designers: Qunxi Huang and Yolegmma Marquez. Paper art: 38 beautiful examples. We may live in a digital world, but our love affair with paper has by no means diminished. 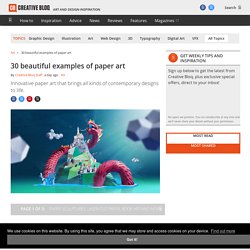 Here are some great of examples of paper art being used imaginatively within contemporary design, bringing paper out of its comfort zone and being used as a creative outlet rather than just a means of delivery... 01. Atlantis This beautiful, underwater paper world was created graphic design and illustration studio Zim & Zou back in 2013. The project was commissioned by French luxury brand Hermès, who hired the team to design the windows for the re-opening of its store located in Rodeo Drive, Beverly Hills. 02. Brazil-based illustration agency D'Avila Studio created this vibrant paper art piece as part of Fiat Motors campaign to promote its new SUV, the Dobló Adventure. 03. The amount of detail in this paper dragon blows our minds. 04. 05. 360° Book Japanese artist and designer Yusuke Oono creates books that open up to tell their stories as a multi-layered 3D scene. 06. Burning Man - StuckInCustoms.com.