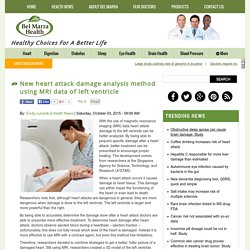 By being able to pinpoint specific damage after a heart attack, better treatment can be prescribed to encourage proper healing. The development comes from researchers at the Singapore Agency for Science, Technology, and Research (A*STAR). When a heart attack occurs it causes damage to heart tissue. This damage can either impair the functioning of the heart or even lead to death. By being able to accurately determine the damage done after a heart attack doctors are able to prescribe more effective treatment. Age-related macular degeneration stopped by carotenoids in carrots. By: Devon Andre | Health News | Friday, October 09, 2015 - 10:00 AM Age-related macular degeneration, a condition that affects the eyes, can be stopped by carotenoids found in carrots. 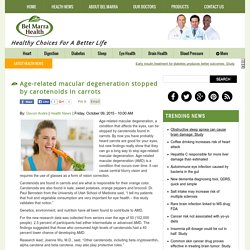 By now you have probably heard carrots are good for your eyes, but new findings really show that they can go a long way to stop age-related macular degeneration. Age-related macular degeneration (AMD) is a condition that occurs over time. Tennis Elbow: Natural Treatment, Causes, Symptoms and Prevention. Tennis elbow, or lateral epicondylitis, is a condition that encompasses the overuse of the forearm, arm and hand muscles, which creates elbow pain. 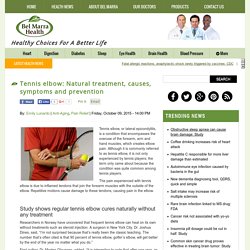 Although it is commonly referred to as tennis elbow, it is not only experienced by tennis players; the term only came about because the condition was quite common among tennis players. The pain experienced with tennis elbow is due to inflamed tendons that join the forearm muscles with the outside of the elbow. Repetitive motions cause damage to these tendons, causing pain in the elbow. Study shows regular tennis elbow cures naturally without any treatment Researchers in Norway have uncovered that frequent tennis elbow can heal on its own without treatments such as steroid injection. First author, Dr. Researchers looked at outcomes from 177 Norwegian patients with tennis elbow. Patients were tracked for up to one year, and by the end 157 patients completed the study. Sleep paralysis: Causes, symptoms and how to cope. By: Bel Marra Health | Sleep | Tuesday, October 06, 2015 - 16:10 PM Sleep paralysis can be a terrifying state of consciousness; not only can you not move your body, but it is often accompanied with scary hallucinations. 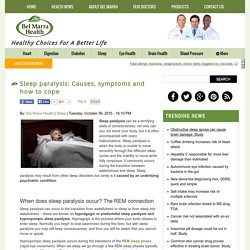 Sleep paralysis is when the body is unable to move smoothly through the different sleep cycles and the inability to move while fully conscious. It commonly occurs during the transition between wakefulness and sleep. Sleep paralysis may result from other sleep disorders but rarely is it caused by an underlying psychiatric condition. When does sleep paralysis occur? Causes of vertigo in elderly. Scientists Reprogram Cancer Cells back to Normal. By: Mohan Garikiparithi | Health News | Tuesday, August 25, 2015 - 22:00 PM Wouldn’t it be nice if we could take cancerous cells, press a rewind button on them and make them go back to their original normative state? 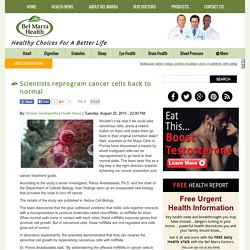 Well, scientists at the Mayo Clinic in Florida have discovered a means by which malignant cells can be reprogrammed to go back to their normal state. The team sees this as a big step in the right direction towards achieving our cancer prevention and cancer treatment goals. According to the study’s senior investigator, Panos Anastasiadis, Ph.D. and the chair of the Department of Cellular Biology, their findings open up an unexpected new biology that provides the code to turn off cancer.

The details of the study are published in Nature Cell Biology. Daily Aspirin May Reduce Colon Cancer Risk. By: Emily Lunardo | Health News | Tuesday, August 25, 2015 - 21:30 PM An apple a day may keep the doctor away, but an aspirin a day may keep colon cancer risk at bay. 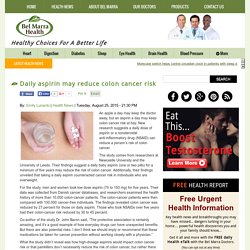 New research suggests a daily dose of aspirin or a nonsteroidal anti-inflammatory drug (NSAID) can reduce a person’s risk of colon cancer. The study comes from researchers at Newcastle University and the University of Leeds. Their findings suggest a daily baby aspirin (one or two pills) for a minimum of five years may reduce the risk of colon cancer. Additionally, their findings unveiled that taking a daily aspirin counteracted cancer risk in individuals who are overweight.

For the study, men and women took low dose aspirin (75 to 150 mg) for five years. Co-author of the study Dr. Active tuberculosis case at University of Alabama prompts mass diagnosis. By: Mohan Garikiparithi | Health News | Tuesday, August 25, 2015 - 18:30 PM Tuberculosis raises its ugly head at the University of Alabama, and the state health authorities are going all out to nip – what could be a potential scare – in the bud. 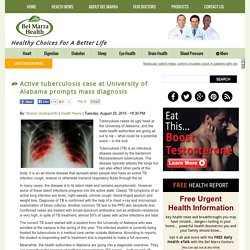 Tuberculosis (TB) is an infectious disease caused by the bacterium Mycobacterium tuberculosis. The disease typically attacks the lungs but can also affect other parts of the body. 47 million people with dementia in 2015, targeted to triple by 2050. By: Emily Lunardo | Health News | Tuesday, August 25, 2015 - 17:30 PM Researchers have reported nearly 41 million people globally have dementia. 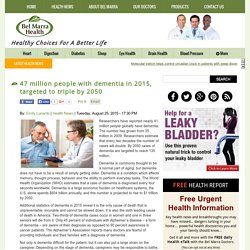 The number has grown from 35 million in 2009. Researchers estimate that every two decades the number of cases will double. By 2050 cases of dementia are targeted to reach 135 million. FDA: cilantro temporarily banned due to cyclosporiasis outbreak. A recent outbreak of cyclosporiasis in Canada and the U.S. is giving health officials in both countries, cause for concern. 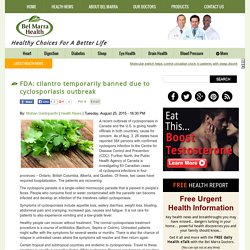 As of Aug. 3, 26 states have reported 384 persons with confirmed cyclospora infection to the Centre for Disease Control and Prevention (CDC). Further North, the Public Health Agency of Canada is investigating 83 Canadian cases of cyclospora infections in four provinces – Ontario, British Columbia, Alberta, and Quebec.