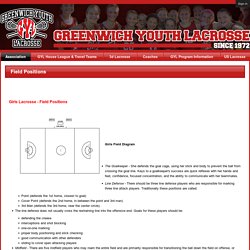 Keys to a goalkeeper's success are quick reflexes with her hands and feet, confidence, focused concentration, and the ability to communicate with her teammates. Line Defense - There should be three line defense players who are responsible for marking three line attack players. Traditionally these positions are called: Point (defends the 1st home, closest to goal) Cover Point (defends the 2nd home, in between the point and 3rd man) 3rd Man (defends the 3rd home, near the center circle). History of Lacrosse - US Lacrosse. The History of Lacrosse By Thomas Vennum Jr.Author of American Indian Lacrosse: Little Brother of War Lacrosse was one of many varieties of indigenous stickball games being played by American Indians at the time of European contact. 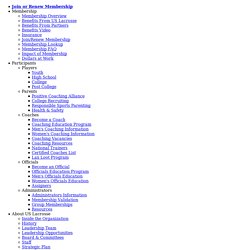 Almost exclusively a male team sport, it is distinguished from the others, such as field hockey or shinny, by the use of a netted racquet with which to pick the ball off the ground, throw, catch and convey it into or past a goal to score a point. The cardinal rule in all varieties of lacrosse was that the ball, with few exceptions, must not be touched with the hands. Early data on lacrosse, from missionaries such as French Jesuits in Huron country in the 1630s and English explorers, such as Jonathan Carver in the mid-eighteenth century Great Lakes area, are scant and often conflicting. Given the paucity of early data, we shall probably never be able to reconstruct the history of the sport. Bibliography: Culin, Stewart. Women's Lacrosse Gear & Technology. DI Women's Lacrosse Statistics. Women's Lacrosse - News - Maryland Terrapins Athletics - University of Maryland Terps Official Athletic Site.

Lacrosse Sticks, Equipment, Gear, Apparel, Cleats & More. Lacrosse Playground » stick tricks. The Campanile : Girls vs. Boys Lacrosse. When people think of boys and girls sports, they usually do not imagine too many differences between the two. 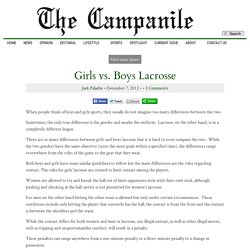 Sometimes, the only true difference is the gender and maybe the uniform. Lacrosse, on the other hand, is in a completely different league. There are so many differences between girls’ and boys’ lacrosse that it is hard to even compare the two. While the two genders have the same objective (score the most goals within a specified time), the differences range everywhere from the rules of the game to the gear that they wear.

Both boys and girls have some similar guidelines to follow but the main differences are the rules regarding contact. Women are allowed to try and knock the ball out of their opponents stick with their own stick, although pushing and checking at the ball carrier is not permitted for women’s lacrosse. For men on the other hand hitting the other team is allowed but only under certain circumstances. Women are only required to wear a mouthguard and eye protection. 10 Important Girls’ Lacrosse Rules for Beginners. A girls' lacrosse player can't check an empty stick. 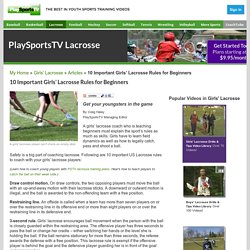 Get your youngsters in the game By Craig Haley PlaySportsTV Managing Editor A girls’ lacrosse coach who is teaching beginners must explain the sport’s rules as much as skills. Girls have to learn field dynamics as well as how to legally catch, pass and shoot a ball. Safety is a big part of coaching lacrosse. (Learn how to coach young players with PSTV lacrosse training plans. Draw control motion. Restraining line. History of lacrosse. Jim Tubby, Mississippi Choctaw, preparing for a stickball game in 1908.[1] Lacrosse has its origins in a tribal game played by eastern Woodlands Native Americans and by some Plains Indians tribes in what is now Canada. 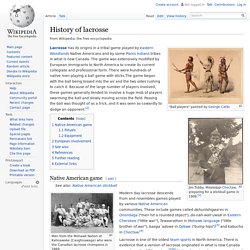 The game was extensively modified by European immigrants to North America to create its current collegiate and professional form. There were hundreds of native men playing a ball game with sticks.The game began with the ball being tossed into the air and the two sides rushing to catch it. Because of the large number of players involved, these games generally tended to involve a huge mob of players swarming the ball and slowly moving across the field. Passing the ball was thought of as a trick, and it was seen as cowardly to dodge an opponent.[2] Native American game[edit]