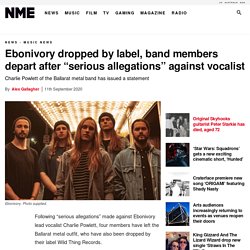 The news was first reported by The Music earlier today (September 11). Wild Thing – who released the band’s latest album ‘The Long Dream I’ back in June – issued a statement revealing they “have been made aware of some serious allegations of a certain band member, of which Wild Things Presents condone this behaviour”. They added, “we as a company can no longer continue to work with this particular act”, and have “terminated all activity effective immediately”. “We hope the alleged behaviour of said individual can be addressed and treatment sought.” Themusic.com. EBONIVORY Interview. 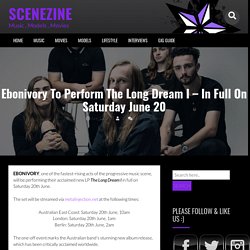 The set will be streamed via metalinjection.net at the following times: Australian East Coast: Saturday 20th June, 10amLondon: Saturday 20th June, 1amBerlin: Saturday 20th June, 2am The one-off event marks the Australian band’s stunning new album release, which has been critically acclaimed worldwide. The album is currently celebrating hitting #1 on the Australian Independent Label Charts, among other strong chart positions and playlist support. Please follow and like us: Ebonivory – Release Their New Album The Long Dream. One of the fastest rising acts of the burgeoning Australian progressive music scene, Ballarat’s Ebonivory have released their highly anticipated new album, The Long Dream I today. 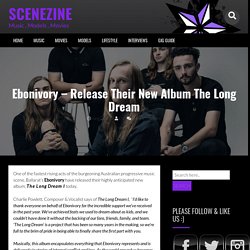 Charlie Powlett, Composer & Vocalist says of The Long Dream I, “I’d like to thank everyone on behalf of Ebonivory for the incredible support we’ve received in the past year. We’ve achieved feats we used to dream about as kids, and we couldn’t have done it without the backing of our fans, friends, family, and team. ‘The Long Dream’ is a project that has been so many years in the making, so we’re full to the brim of pride in being able to finally share the first part with you. Musically, this album encapsulates everything that Ebonivory represents and is delivered via stories of internal conflict and loss. Hey! Listen to Ebonivory (again!) - Heavy Blog Is Heavy. When exactly do we make two “Hey! 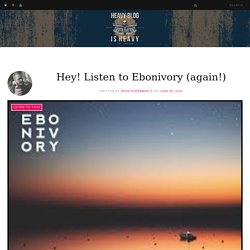 Listen to This!” Posts? It’s usually when an artist or band have grown a lot since the last time we’ve spoken about them. We want you to give them a fresh listen, because things are either very different than last time or represent a more mature and fully realized version of the band’s vision. In this case, we’re firmly in the latter’s territory: Ebonivory still make the kind of chromatic, bright progressive metalcore that caused us to tell you to listen to them last time. Album Review: Ebonivory - 'The Long Dream I' // Killyourstereo.com. As someone who has been associated with the Melbourne music scene for ten years now, I’m always wanting more. 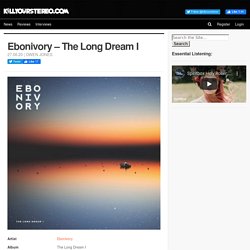 The bands that come out of the city and surrounding Victoria region are, more often than not, world class and there’s always that one band that will stand out from the rest that have stayed playing the same old sound. Ebonivory are that band. A band that I always heard about but haven’t had the chance to take photos of or see live, which will need to change once shows start happening again. The Ballarat lads are back with second album, ‘The Long Dream I‘ – a record that’s been long time coming, and a mighty follow up to 2015’s ‘The Only Constant.’ This is a release that was thrust upon me to review, and boy, I am so glad it was. “The world’s changing so quickly around us!” – An Interview With Jake Ewings (Ebonivory) As has been proven over the years, full-blown concept albums can be hard to pull off. 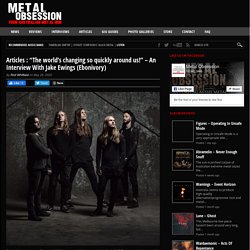 For every instance where the artform was executed to seeming perfection, for every Operation: Mindcrime, The Wall or Scenes From a Memory, there are several attempts that fell a little short of their lofty ambitions. The lads in Ballarat-based progressive act Ebonivory would have been well aware of this as they approached the creation of their sophomore album The Long Dream I, but they did not let that dissuade them from attempting such a monumental task. Now, despite the long and laborious task that it was, the album is ready, and at the time of writing, just a couple of short weeks from release. The results of their efforts are stunning, as progressive music punters will soon discover, and guitarist Jake Ewing joins us from his home in Ballarat, where he is currently working from home during the Covid-19 crisis, to chat about the album’s creation, its concept and plenty more besides. EBONIVORY // Living The Dream. A little over twelve months ago, Ballarat prog unit Ebonivory was one of the scene’s best kept secrets. 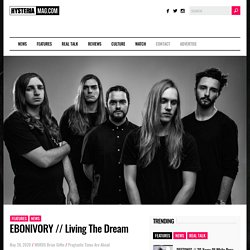 MORE: PARKWAY DRIVE: Triumph Of The Underdogs // KICK OUT THE JAMS with Stepson REVIEWS: VIOLENT SOHO: Everything Is A-OK // ENTER SHIKARI: Nothing Is True & Everything Is Possible // BOSTON MANOR: Glue // THE USED: Heartwork // CALIGULA’S HORSE: Rise Radiant // EBONIVORY: The Long Dream I A series of early EPs had won them a cult following among local progressive music aficionados before a break-out tour with Dead Letter Circus last year put them in front of a much wider audience. In June, the band will be issuing their debut album, The Long Dream I, the first of a two-part set. What will be essentially a double album may seem like an ambitious gambit for a young band’s first major release, but as guitarist Louis Edwards points out, the initial plan was for it to be even bigger.

EBONIVORY // The Long Dream I. 2020 may turn out to be one of the finest years in the history of Australian prog. 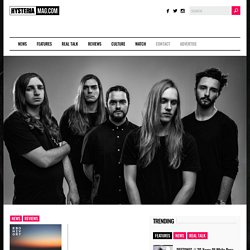 Just consider some of the names that have either released, or will soon put out, new material: Caligula’s Horse, Ne Obliviscaris, We Lost The Sea (ok, putting out an anniversary release, rather than new material), Vanishing Point, sleepmakeswaves, Alithia, to name but a few. MORE: PARKWAY DRIVE: Triumph Of The Underdogs // KICK OUT THE JAMS with Stepson // PARADISE LOST: Doom Unites Us REVIEWS: VIOLENT SOHO: Everything Is A-OK // ENTER SHIKARI: Nothing Is True & Everything Is Possible // THE BLACK DAHLIA MURDER: Verminous // TRIVIUM: What The Dead Men Say // BOSTON MANOR: Glue // THE USED: Heartwork From the dark and gloomy to the mellow and serene, these names represent a wide spectrum of what the prog world has to offer, and yet they all point to one universal truth: Australia puts out some bloody good prog. 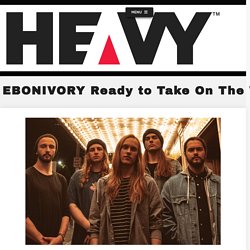 Louder playlist: June 2020. EBONIVORY - The Long Dream — Sense Music Media. To describe EBONIVORY as an exceptional Australian progressive metal band would be a worthy acclamation… but it’s not that simple. 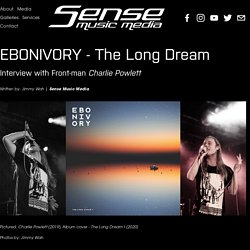 Some have tried to define the band’s unique style as a mixture of alternative rock, post-hardcore, progressive metal and modern punk; but even then, that doesn’t really hit the mark. Ebonivory - Debut at #1 on the Australian Independent Label Chart. Ebonivory navigate The Long Dream. A whirlwind performance at Australia’s acclaimed Progfest alongside international heavyweights The Ocean, Monuments and Skyharbor; joining forces with Wild Thing Records; a tour alongside alt-rock powerhouse Dead Letter Circus; and a support slot around the country with progressive juggernauts Circles have seen the Ebonivory rise through the progressive ranks over the past 18 months.

“It’s become very real upon some of us that this has been an absolute monolithic undertaking,” explains guitarist Louis Edwards. “There are tracks on here that have been around, in some form, for the better part of a decade, so to finally have it almost out of our hands, it’s going to be a massive weight off our shoulders.” Led by the inspired performances of singer Charlie Powlett, The Long Dream I is the first of a two-part concept album which sees the band deliver a vision that is pure and unrestrained by musical conformity.

Ballarat’s Ebonivory push the boundaries on their new album, The Long Dream I. June 4, 2020 I’d like to start out by giving my props to Ballarat based band Ebonivory. Progressive metal to me has lost the right to refer to itself as being ‘progressive.’ With most bands striving for the exact same sound it is such a welcomed relief to hear a band that’s actually pushing the boundaries of their genre. Kicking off with ‘Introduction’, a 2 minute affair that’s symphonic and choir based components give off a similar vibe to the beginning of Good Charlotte’s ‘Young and The Hopeless’ but with much more balls. Ballarat’s prog metal masterminds Ebonivory have crafted a sensational new album with ‘The Long Dream I’ Fresh from unleashing a row of smashing sets on a national co-headline tour with Sydney’s Glass Ocean and revealing singles ‘Tales Of Termina’, ‘Explosions After Dark’ and most recently, ‘Introvection’, Ballarat prog-metal sensations Ebonivory are ready to reveal their new record The Long Dream I.

A whirlwind performance at Australia’s acclaimed Progfest alongside international heavyweights The Ocean, Monuments and Skyharbor; joining forces with Wild Thing Records; a tour alongside alt-rock powerhouse Dead Letter Circus; and a support slot around the country with progressive juggernauts Circles have seen the Ebonivory rise through the progressive ranks over the past 18 months. Finally dropping tomorrow, June 5, the five-piece’s release has been high-anticipated. “It’s become very real upon some of us that this has been an absolute monolithic undertaking,” explains guitarist Louis Edwards. “A lot of us don’t really have an enormous history with prog metal,” Edwards continues. Ballarat’s prog metal masterminds Ebonivory have crafted a sensational new album with ‘The Long Dream I’ Themusic.com. Ebonivory – The Long Dream I (2020) Wild thing records. Jaw-droppingly good. There’s no denying that the symphonic eruption at the start of this incredible album conjures up memories of Devin Townsend’s many releases in sheer magnitude and power.

It hits like a smack in the face..instant and disorienting. I liked it. A lot. If nothing else it set the tone for what is to follow which really challenged my preconceived idea’s about the band. The first proper song on the album ‘Hanmer Street’ brings big time melodic shred, delicate staccato picking and a highly percussive rhythm section into focus. I have to pause to reflect that the high quality of the production is evident right from the beginning and if you aren’t impressed by at least this much…check your ears. ‘Persist’ follows with a heavier lean adding decent chugs and growls to the bands palette. ALBUM REVIEW: Ebonivory – ‘The Long Dream I’ – Good Call Live. Words by Carly Gibbs After a massive 2019 for Ebonivory, the boys from Ballarat are about to gift us with their highly anticipated, first part of a two-part concept album, ‘The Long Dream I’.

Last year saw them bag a coveted spot on the acclaimed Progfest bill, tour alongside progressive titans Circles and support alt-rock heavyweights Dead letter Circus. 2020 was shaping up to be another massive year but then that dauntless d*ckhead, Covid-19, turned up uninvited and threw a spanner in our live music works (amidst much worse outcomes, of course). This hasn’t dampened their momentum though, gaining a legion of dedicated and besotted fans who will, no doubt, go ape for ‘The Long Dream I.’ Ebonivory have been drip feeding us little proggy babies (which sounds a lot stranger than it actually is) for a little while now in the lead up to this release so you might already be familiar with quite a few tracks on this album.