Armored Dawn: Viking Zombie. Struggles to hold a listener’s attention Metal is a universal language, we all know that right? 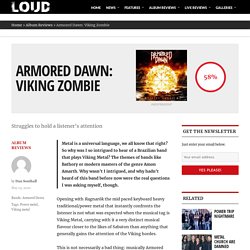 So why was I so intrigued to hear of a Brazilian band that plays Viking Metal? The themes of bands like Bathory or modern masters of the genre Amon Amarth. Why wasn’t I intrigued, and why hadn’t heard of this band before now were the real questions I was asking myself, though. Opening with Ragnarök the mid paced keyboard heavy traditional/power metal that instantly confronts the listener is not what was expected when the musical tag is Viking Metal, carrying with it a very distinct musical flavour closer to the likes of Sabaton than anything that generally gains the attention of the Viking hordes. This is not necessarily a bad thing: musically Armored Dawn are absolutely on point, even more so when the keyboards are almost silent, allowing the music to have solid crunch and drive. 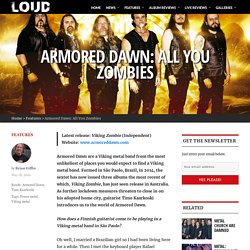 Formed in São Paolo, Brazil, in 2014, the sextet has now issued three albums the most recent of which, Viking Zombie, has just seen release in Australia. As further lockdown measures threaten to close in on his adopted home city, guitarist Timo Kaarkoski introduces us to the world of Armored Dawn. How does a Finnish guitarist come to be playing in a Viking metal band in São Paolo? Oh well, I married a Brazilian girl so I had been living here for a while. Armored Dawn interview. Twinmusix got to speak to Timo Kaarkoski from Armored Dawn about their upcoming album and more. 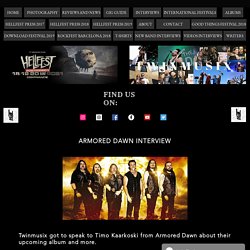 TM - Hi, This is Elizabeth and Amelia from Twinmusix. How are you? TK - I am good, just sitting inside the house like the rest of the world. All we can do is wait for this virus to be over. TM - I know, it's so boring. TK - Every day is like Sunday. TM - You don't realise how much you miss it till it's gone. Armored Dawn - Brazillian Viking MetallersTo Release New Album, 'Viking Zombie' - Music LINK WA. Armored Dawn is, without a doubt, one of the revelations of Brazilian Viking Metal.Formed in 2014 in Sao Paulo, the band has been making their mark for years with a consistent work ethic of writing, recording, and touring that have helped build the success of the band. 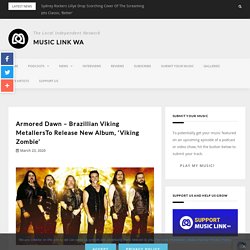 The Deluxe Edition of band’s latest album Viking Zombie will be releasedin Australia on Friday, March 27. The album’s first two singles, “Ragnarok” and “Animal Uncaged,” both gained huge radio exposure in the US, peaking in the top 15 on the Mediabase Independent chart. The video clip of “Viking Soul” was shot at Yosemite in California, and has reached more than 350 thousand views on YouTube. ARMORED DAWN: Brazillian Viking Metallers To Release New Album, Viking Zombie On March 27. A Dirty Dozen with TIMO KAARKOSKI and ARMORED DAWN - April 2020. According to a recent press release: “Armored Dawn, the Brazilian metal band from Sao Paulo has released its new album Viking Zombie via The Orchard/Sony. 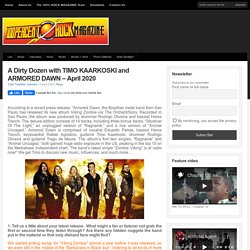 Recorded in Sao Paulo, the album was produced by drummer Rodrigo Oliveira and bassist Heros Trench. The deluxe edition consists of 14 tracks, including three bonus tracks, “Skydiver Of The Light,” an unplugged version of “Ragnarok,” and a live version of “Animal Uncaged.” Armored Dawn is comprised of vocalist Eduardo Parras, bassist Heros Trench, keyboardist Rafael Agostino, guitarist Timo Kaarkoski, drummer Rodrigo Oliveira and guitarist Tiago de Moura. The album’s first two singles, “Ragnarok” and “Animal Uncaged,” both gained huge radio exposure in the US, peaking in the top 15 on the Mediabase Independent chart. The band’s latest single “Zombie Viking” is at radio now!”

1. 2. Well, we all got involved in music at a very early age. ARMORED DAWN Interview. One band that has really been on the rise over the past few years are Brazilian band Armored Dawn. 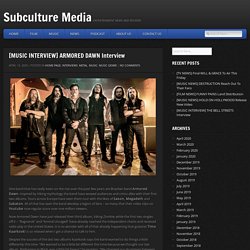 Inspired by Viking mythology the band have wowed audiences and critics alike with their first two albums. Tours across Europe have seen them tour with the likes of Saxon, Megadeth and Sabaton. All of that has seen the band develop a legion of fans – so many that their video clips on Youtube now regular score over one million viewers. Now Armored Dawn have just released their third album, Viking Zombie, while the first two singles off it – “Ragnarok” and “Animal Uncaged” have already reached the independent charts and received radio play in the United States. It is no wonder with all of that already happening that guitarist Timo Kaarkoski is so relaxed when I get a chance to talk to him.

Despite the success of the last two albums Kaarkoski says the band wanted to do things a little differently this time. ARMORED DAWN. Brazillian Viking Metallers To Release New Album, Viking Zombie On March 27. 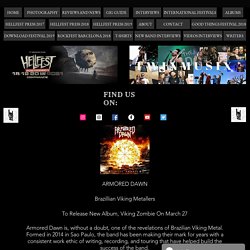 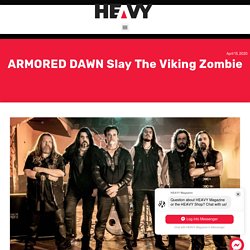 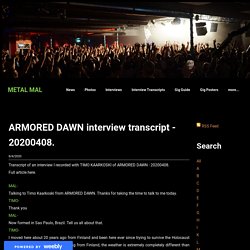 MAL-Talking to Timo Kaarkoski from ARMORED DAWN. Thanks for taking the time to talk to me today. TIMO-Thank you MAL-Now formed in Sao Paulo, Brazil. Tell us all about that.TIMO-I moved here about 20 years ago from Finland and been here ever since trying to survive the Holocaust because, you know, of course, coming from Finland, the weather is extremely completely different than anything we have in Europe and overcrowded, polluted. 20200408 Armored Dawn Interview. Armored Dawn - Scars N Guitars.png. StackPath. StackPath. Armored Dawn - Brazillian Viking Metallers To Release New Album.