Rights of Children in the Immigration Process. In recent years, the number of immigrant children arriving in the United States has increased dramatically, with many children from Central America fleeing extreme violence and persecution in their home countries. 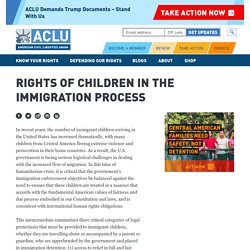 As a result, the U.S. government is facing serious logistical challenges in dealing with the increased flow of migration. In this time of humanitarian crisis, it is critical that the government’s immigration enforcement objectives be balanced against the need to ensure that these children are treated in a manner that accords with the fundamental American values of fairness and due process embodied in our Constitution and laws, and is consistent with international human rights obligations.

Children of Immigration - Carola Suárez-Orozco, Marcelo M. Suárez-Orozco - Google Books. Migrants Deported from the United States and Mexico to the Northern Triangle: A Statistical and Socioeconomic Profile. The United States and Mexico have apprehended nearly 1 million Salvadoran, Guatemalan, and Honduran migrants since 2010, deporting more than 800,000 of them, including more than 40,000 children. 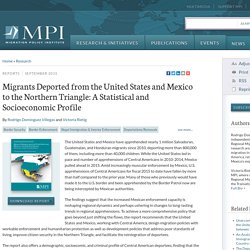 While the United States led in pace and number of apprehensions of Central Americans in 2010-2014, Mexico pulled ahead in 2015. Amid increasingly muscular enforcement by Mexico, U.S. apprehensions of Central Americans for fiscal 2015 to date have fallen by more than half compared to the prior year. Many of those who previously would have made it to the U.S. border and been apprehended by the Border Patrol now are being intercepted by Mexican authorities. The findings suggest that the increased Mexican enforcement capacity is reshaping regional dynamics and perhaps ushering in changes to long-lasting trends in regional apprehensions.

Table of Contents. Increased Central American Migration to the United States May Prove an Enduring Phenomenon. Editor's note: This article was amended to correct the data on Mexico's FY 2015 apprehensions and to clarify that Figure 2 refers to apprehensions of Northern Triangle nationals. 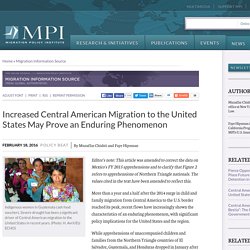 The values cited in the text have been amended to reflect this. More than a year and a half after the 2014 surge in child and family migration from Central America to the U.S. border reached its peak, recent flows have increasingly shown the characteristics of an enduring phenomenon, with significant policy implications for the United States and the region. While apprehensions of unaccompanied children and families from the Northern Triangle countries of El Salvador, Guatemala, and Honduras dropped in January after rising sharply in November and December 2015, this monthly decline may be an aberration. Evidence suggests the deeply rooted push and pull factors propelling these flows show no signs of relenting. A Look at the Trends. Rising Child Migration to the United States.

The number of unaccompanied minors (also known as UACs) crossing the U.S. 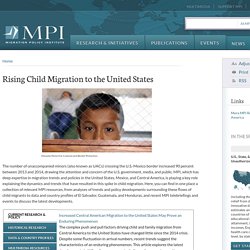 -Mexico border increased 90 percent between 2013 and 2014, drawing the attention and concern of the U.S. government, media, and public. MPI, which has deep expertise in migration trends and policies in the United States, Mexico, and Central America, is playing a key role explaining the dynamics and trends that have resulted in this spike in child migration. Here, you can find in one place a collection of relevant MPI resources, from analyses of trends and policy developments surrounding these flows of child migrants to data and country profiles of El Salvador, Guatemala, and Honduras, and recent MPI telebriefings and events to discuss the latest developments. Increased Central American Migration to the United States May Prove an Enduring Phenomenon The complex push and pull factors driving child and family migration from Central America to the United States have changed little since the 2014 crisis.

U.S. Temporary Protected Status in the United States: A Grant of Humanitarian Relief that Is Less than Permanent. From a massive typhoon in the Philippines last November to the ongoing civil war in Syria, recent global events demonstrate that natural disasters and political strife occur suddenly and often without warning. 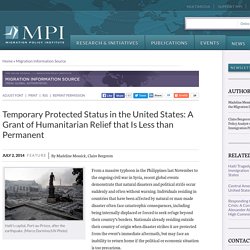 Individuals residing in countries that have been affected by natural or man-made disaster often face catastrophic consequences, including being internally displaced or forced to seek refuge beyond their country’s borders. Nationals already residing outside their country of origin when disaster strikes it are protected from the event’s immediate aftermath, but may face an inability to return home if the political or economic situation is too precarious.