Upwork - Hire Freelancers & Get Freelance Jobs Online. 404 Page Inspiration — Muzli -Design Inspiration. 30 Email Etiquette Tips For Avoiding Sloppy Emails. Punctuation, Grammar, and Copy Section 1 Proper sentence structure may sound overrated, but think of this way: After someone reads our email, do we want the main takeaway to be the core message or the fact that we misused a semicolon? 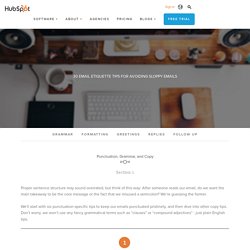 We’re guessing the former. We'll start with six punctuation-specific tips to keep our emails punctuated pristinely, and then dive into other copy tips. Don’t worry, we won’t use any fancy grammatical terms such as “clauses” or “compound adjectives” - just plain English tips. " " Quotation Marks We all know when to use them, but the most common mistake is where to place them. His book, “Design for Puppies”, releases tomorrow. His book, “Design for Puppies,” releases tomorrow. ( ) Parentheses Periods and commas go outside the parentheses, except for when the parenthetical sentence stands alone. 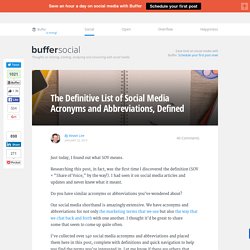 Researching this post, in fact, was the first time I discovered the definition (SOV = “Share of Voice,” by the way!). I had seen it on social media articles and updates and never knew what it meant. Do you have similar acronyms or abbreviations you’ve wondered about? Our social media shorthand is amazingly extensive. We have acronyms and abbreviations for not only the marketing terms that we use but also the way that we chat back and forth with one another.

Ex-TiVo Exec Named CTO Of ContentWise. Pancrazio Auteri, an exec late of TiVo, has been named chief technology officer of ContentWise, a company that specializes in content personalization, discovery and recommendations technologies. 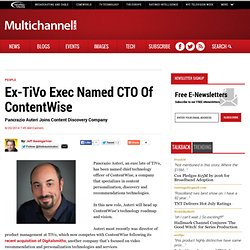 In this new role, Auteri will head up ContentWise’s technology roadmap and vision. Auteri most recently was director of product management at TiVo, which now competes with ContentWise following its recent acquisition of Digitalsmiths, another company that’s focused on video recommendation and personalization technologies and services. “Personalization has become a necessity for service providers as they compete with new Internet video players and strive to remain relevant to consumers,” said Auteri, in a statement. “I am excited to join ContentWise because it is positioned at the heart of this transformation. Psicopatologia delle professioni del web. Pubblicato il 8 luglio 2014. 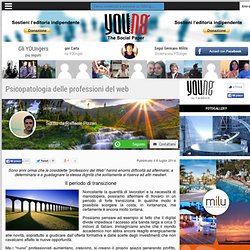 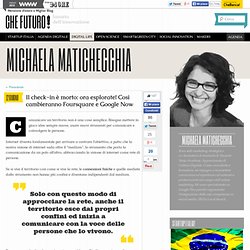 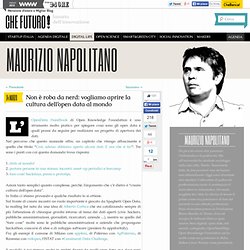 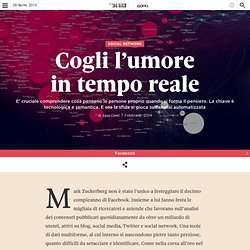 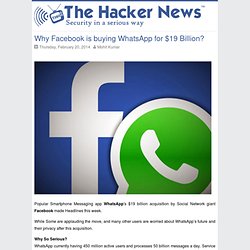 While Some are applauding the move, and many other users are worried about WhatsApp’s future and their privacy after this acquisition. Why So Serious? Biz Stone's Jelly has launched. Connect with leaders from the companies in this story, in real life: Come to the fourth annual VentureBeat Mobile Summit April 14-15 in Sausalito, Calif. 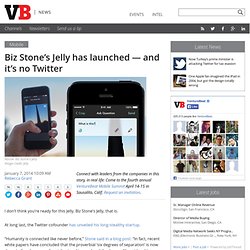 Request an invitation. I don’t think you’re ready for this Jelly. Biz Stone’s Jelly, that is. At long last, the Twitter cofounder has unveiled his long-stealthy startup. “Humanity is connected like never before,” Stone said in a blog post. Jelly is an app for asking and answering questions to people in your social network and beyond. “Using Jelly is kinda like using a conventional search engine in that you ask it stuff and it returns answers,” Stone said in a blog post. Stone and Twitter cofounder Ev Williams left Twitter and founded the Obvious Corporation, which launched in 2011 as a startup incubator and investment vehicle. Yahoo! sfida il mondo delle news online. If you add audio to a photo-sharing app, it’s still a photo-sharing app. By Hamish McKenzie On September 26, 2013 The advent of the mobile era has unlocked a wave of storytelling innovation, with some of the most effective of these stories being told through images. 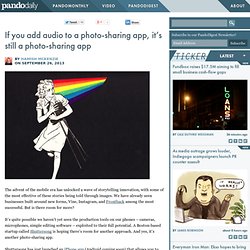 We have already seen businesses built around new forms, Vine, Instagram, and Frontback among the most successful. But is there room for more? If you add audio to a photo-sharing app, it’s still a photo-sharing app. The Best Music For Business. Mobile Jukebox App For Your Customers. Facebook è già vecchio: 5 modi per rianimarlo.

5 Tools to Keep on Top of Social Media. Now that you’ve set up your Twitter® account, LinkedIn® profile and Facebook® page, and created a personal website, how are you supposed to stay on top of them all? Don’t sweat it, says Noland Hoshino, an alumnus of the University of Phoenix MBA program and co-founder of [B]cause Media. “There are lots of awesome applications out there that help you save time and keep content fresh,” he says. Here’s Hoshino’s advice on the easiest-to-use free tools: Twitter and Tweets are registered trademarks of Twitter Inc. LinkedIn is a registered trademark of LinkedIn Corp.

Resoconto Utili Facebook Q3: 7 cose che ogni marketer dovrebbe sapere. Iniziativa sul “personal branding” dell’Ateneo premiata alla Borsa del Placement di Bologna. How Many People Use 300 of the Top Social Media, Apps & Services? (November 2013) Here is my monthly, running tally of how many people are using many of the top social media, digital services and mobile apps updated for December 2015 (the best I could find, at least). This list grows pretty regularly. It began with a simple listing of some of the obvious social networks like Facebook, Twitter, LinkedIn, Skype, YouTube, WhatsApp, VK.com, Odnoklassniki, etc; then grew to include digital services like Amazon, Google, eBay, Netflix, Spotify and Pandora; then the focus turned to APAC social and digital properties like Alibaba, Weibo, WeChat, JD.com, LINE and Momo and lately I have been focused on updating current listings, adding in new ones along with smaller niche ones that I may have overlooked at the beginning.

Board condivise su Pinterest (parte 1) 5 Tools to Keep on Top of Social Media. An exclusive interview with Bill Gates. The internet is not going to save the world, says the Microsoft co-founder, whatever Mark Zuckerberg and Silicon Valley’s tech billionaires believe. But eradicating disease just might. ©Amanda Friedman Gates photographed at the Bill & Melinda Gates Foundation in Seattle in September.

Five LinkedIn Strategies You Haven't Thought Of Before. iRule iOS and Android WiFi Universal Remote Control System. You've most likely have wanted to species of fish in the course of your daily life but came to a major challenge: you already know practically nothing about this! That's ok, many people don't know something about sport fishing, but which can be effortlessly set Please read on if you prefer a bit more specifics of fishing ugg boots for cheap For capturing greater seafood, use more compact size bait This could noise unusual, although the small bait will give you a bit of an advantage More compact bait lets you get more rate when controlling in water, that is necessary for finding a greater fish that is quite likely going to escaping.

Don't Like LinkedIn? 5 Other Social Networks That Can Help You Land A Job. LinkedIn has been the goto social network for finding a job as of late, and honestly, why shouldn’t it be? It has a great deal of wonderful resources and tools aimed at job-seekers and employers alike to help them both on their journeys, and is a great tool for job-finding, especially if you can make your profile irresistible.

47 Ideas to Improve Your Online Reputation. 47 Ideas to Improve Your Online Reputation Improving your online reputation does not always require huge amounts of time or money. There are several things you can do to make your digital presence work better for your personal and business goals. Do you need some inspiration? Here 47 ideas to improve your current state and change the perception of your brand in a matter of minutes, days or weeks. Enjoy the list and tweet to your followers the one you will start applying today:

Instagram Video and the Death of Fantasy. Map the iPhone Users In Any City, And You Know Where the Rich Live - Emily Badger. Our stuff often says a lot about us, whether we own a hybrid car or a station wagon, a MacBook Pro or an ancient desktop. And this is no less true of our smart phones, sold on a sharply divided market between iPhones, Androids, and Blackberries. Among other things, cell phone brands say something about socio-economics – it takes a lot of money to buy a new iPhone 5 (and even more money to keep up with the latest models that come out faster than plan upgrades do). Reclog: a new way to share emotions. Take a pic and record its own sound. Some weeks ago I was at AdTech Sydney and Richard Frankel, creative director of Spotify, said these words: “Sounds drive memories and they are automatically social experiences.”

I thought of these words when I tried for the first time Reclog. Reclog is a new app, made in Italy and available for iOS (at the moment), aiming to turn pictures into a completely new emotional experience. Why? Because now you can relive the experience happening in that specific moment, viewing an image and listening to what was happening in that specific moment, while you was taking it.

Reclog is not simply a “social voice” through which you can take a picture, record sounds up to 30seconds and share them on Facebook and Twitter. Mobile Strategy, Marketing e Mobile apps. 16 Common Mistakes Young Startups Make. Are you working on a startup? If so, I hate to break it to you, but there's a good chance it will fail. In fact, recent research shows that 75% of startups fail (based on a study of 2,000 startups that received VC funding from 2004 to 2010).

La mappa di Twitter. Reclog: scatta una foto e registra il tuo messaggio audio. Startups Bet Audio Is the Next Frontier for Social Media. There's no shortage of apps and websites to help us share our lives through videos, pictures and text messages, but we've moved farther and farther away from what was once the central means of communicating: the sound of our own voice. Now, a couple startups are trying to change that. Dubbler, an app that quietly launched in beta on iPhone and Android in December, offers a simple way to record up to 60 seconds of audio and share them to Facebook, Twitter and the Dubbler community. You can add playful sound filters (similar to photo filters on Instagram) and a cover photo from your phone's camera if you want, or you can let the soundbite speak for itself. Perché Yahoo ha comprato Tumblr. Dai fornelli al web: come i food blogger usano i social network. Trovare lavoro in tempi di crisi: una ricerca Hivejobs - Quotidiano Impresa.