iOS Bug. The following message will freeze an iPhone when received as an iMessage and displayed as a banner notification. 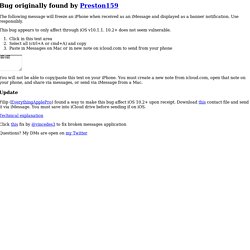 Use responsibly. This bug appears to only affect through iOS v10.1.1. 10.2+ does not seem vulnerable. Click in this text area Select all (ctrl+A or cmd+A) and copy Paste in Messages on Mac or in new note on icloud.com to send from your phone You will not be able to copy/paste this text on your iPhone. You must create a new note from icloud.com, open that note on your phone, and share via messages, or send via iMessage from a Mac. Update. Top 100 Best Blogs for iOS Developers to Learn and Gain Insights.

(by JP Zhang | Last updated: July 27, 2016 ) If you are looking for insightful and educational iOS development blogs, you've come to the right place. 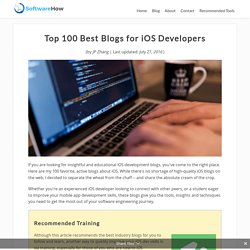 Here are my 100 favorite, active blogs about iOS. While there's no shortage of high-quality iOS blogs on the web, I decided to separate the wheat from the chaff -- and share the absolute cream of the crop. Whether you're an experienced iOS developer looking to connect with other peers, or a student eager to improve your mobile app development skills, these blogs give you the tools, insights and techniques you need to get the most out of your software engineering journey. Recommended Training Although this article recommends the best industry blogs for you to follow and learn, another way to quickly improve your iOS dev skills is via training, especially for those of you who are new to iOS development. 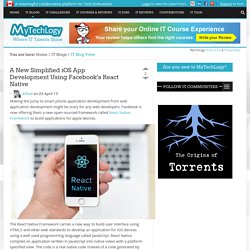 User Experience. A Comparison of Syncing Technologies — Joel Grasmeyer. Over the last year, I've been evaluating several syncing technologies to use in a new app. 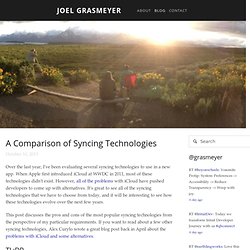 Apple's App Bundles - Is There Still Potential For Paid Apps? How to build a mobile enterprise app that works everywhere. Mobile apps are a way of life. 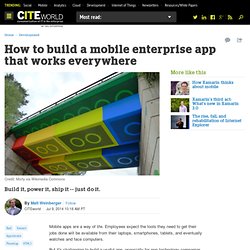 Employees expect the tools they need to get their jobs done will be available from their laptops, smartphones, tablets, and eventually watches and face computers. But it's challenging to build a useful app, especially for non-technology companies that have never done it before. You have to think about designing the app, connecting it to your enterprise backend, and powering it up with services like cloud storage, identity, push notifications, and management -- and unless you're imposing IT fascism on your employees, you have to serve a mixture of iOS, Android, and other platforms.

A Statistical Comparison of the iOS and Android Stores - ShinobiControls Website. A few months ago I published a blog post which showed the results of analysing the meta-data of 75,000 apps from the iTunes App Store.

This analysis revealed some interesting results; 75% of apps are free, 60% have no ratings and the Entertainment category has the worst user ratings. This blog post continues the analysis by adding 60,000 Android apps into the mix. For those of you that like their information presented in tweet-sized portions, here are some quick results The iOS store has 3.5x more business apps than the Android store, and 2x more Education apps.Both stores have roughly the same number of free apps, at 75%The most expensive category in the Android store is Medicine at $21 avg, which is double the most expensive iOS category, Business, with an average price of $12.The average user rating of Android apps is slightly lower than iOS appsThe Apple store has 3x more apps with zero user ratings. 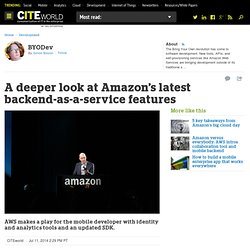 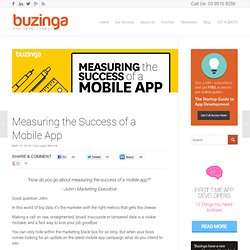 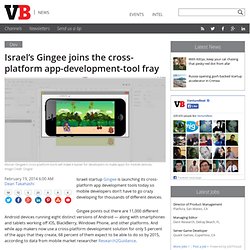 Gingee points out there are 11,000 different Android devices running eight distinct versions of Android — along with smartphones and tablets working off iOS, BlackBerry, Windows Phone, and other platforms. And while app makers now use a cross-platform development solution for only 5 percent of the apps that they create, 68 percent of them expect to be able to do so by 2015, according to data from mobile market researcher Research2Guidance.

Subway Surfers creator explains why co-development is key in mobile games. Not all players are the same! 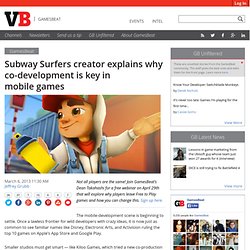 Join GamesBeat's Dean Takahashi for a free webinar on April 29th that will explore why players leave Free to Play games and how you can change this. Sign up here. Smartphone Market Share by Country - Q3 2013: Android Dominates Outside US, Windows Phone Grows in Europe. It's time for my quarterly recap of smartphone market share trends by region. As usual, global sales figures are from Gartner, while region-wise market share figures are from Kantar. In Q3, Android continued to lead the market, the iPhone saw a cyclical decline leading up to the iPhone 5C/5S launch and Windows Phone continued to grow at a smaller scale.

The chart above shows Gartner's global smartphone sales (sell-through) estimates. Nearly 82% of the 250 million smartphones sold in Q3 ran on the Android operating system, while iOS and Windows Phone represented 12% and less than 4% of the market, respectively. Android recently became the fastest platform to reach 1 billion users and has yet to register a single sequential, quarterly decline in smartphone sales/shipments. The Pros and Cons of Cross-Platform App Design. In 2011, having a mobile strategy shifted from "nice to have" to "must have" for businesses of all sizes. In 2012, that same shift is taking place when it comes to supporting multiple mobile platforms. Sure, some companies can focus on just one operating system and exclude all others, but most businesses and brands need to target myriad device types. It's no longer enough to just have an iPhone app — even small and medium sized businesses need to have a plan to support iPad, Android phones, the Amazon Kindle, larger Android tablets, Windows Phone and BlackBerry.

The disunited state of Android. 77inShare Jump To Close An extensive survey has detailed what the Android market looks like with stunning clarity. OpenSignal (OS) looked at some 682,000 devices currently in use — the same sample size as its 2012 survey — revealing the split between manufacturers, their devices, Android versions, and screen sizes. There can be few charts that better demonstrate how Samsung has come to completely dominate the Android smartphone market: saturation. L'app che mappa gli edifici abbandonati. The disunited state of Android. Il Siri del futuro saprà chi sei e non dormirà mai.

Startup, l'italiana ProxToMe raccoglie 700mila dollari e lancia una nuova app. Mobile: non solo app. Il Ministero dell’Istruzione e veDrò lanciano un concorso digitale per studenti. Google Gets Patent for Using Background Noise to Target Ads. Google, on Tuesday, was awarded a patent for "advertising based on environmental conditions. " In other words, Google has patented the technique of using environmental factors gathered through a device's sensors to target ads at users. "When determining what ads to serve to end users, the environmental factors can be used independently or in combination with matching of keywords associated with the advertisements and keywords in user search queries," the patent reads.