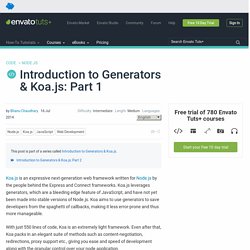 Koa.js leverages generators, which are a bleeding edge feature of JavaScript, and have not yet been made into stable versions of Node.js. Koa aims to use generators to save developers from the spaghetti of callbacks, making it less error-prone and thus more manageable. With just 550 lines of code, Koa is an extremely light framework. Even after that, Koa packs in an elegant suite of methods such as content-negotiation, redirections, proxy support etc., giving you ease and speed of development along with the granular control over your node application.

Now before we begin, you will need to have at least Node version 0.11.x or greater. You can install the latest version of Node using the N module : You can also use other community modules like nvm or build it from source. For example, to run app.js, enter in the following command: Very good! Example: sum.next(5); RethinkDB Screencast. Install and Secure RethinkDB on DigitalOcean - Andrew Munsell. RethinkDB is a distributed document-store database that is focused on easy of administration and clustering. 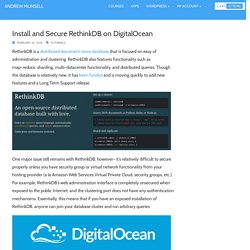 RethinkDB also features functionality such as map-reduce, sharding, multi-datacenter functionality, and distributed queries. Though the database is relatively new, it has been funded and is moving quickly to add new features and a Long Term Support release. One major issue still remains with RethinkDB, however– it’s relatively difficult to secure properly unless you have security group or virtual network functionality from your hosting provider (a la Amazon Web Services Virtual Private Cloud, security groups, etc.). For example, RethinkDB’s web administration interface is completely unsecured when exposed to the public Internet, and the clustering port does not have any authentication mechanisms.

Essentially, this means that if you have an exposed installation of RethinkDB, anyone can join your database cluster and run arbitrary queries. GitHub - segphault/rethinkdb-poll-demo. GitHub - rethinkdb/node-login: A fork of braitsch/node-login template for quickly building login systems on top of Node.js & RethinkDB. What is RethinkDB? Start a RethinkDB server - RethinkDB. This document describes how to start RethinkDB from the command line in several configurations, from a single instance on one machine to multiple instances on multiple machines. 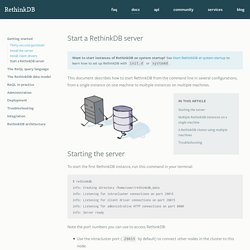 Install RethinkDB on Windows - RethinkDB. Prerequisites: We provide native 64-bit binaries for Windows 7 and above. 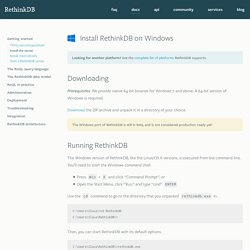 A 64-bit version of Windows is required. Download the ZIP archive and unpack it in a directory of your choice. The Windows port of RethinkDB is still in beta, and is not considered production ready yet! The Windows version of RethinkDB, like the Linux/OS X versions, is executed from the command line. You’ll need to start the Windows command shell. Press Win + X and click “Command Prompt”; or Open the Start Menu, click “Run,” and type “cmd” ENTER. An introduction to building realtime apps with RethinkDB. 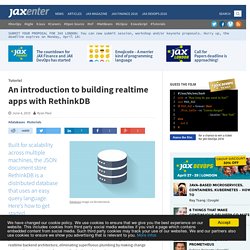 Instead of polling for changes, the developer can turn a query into a live feed that continuously pushes updates to the application in realtime. RethinkDB’s streaming updates simplify realtime backend architecture, eliminating superfluous plumbing by making change propagation a native part of your application’s persistence layer. The chemical wedding of RethinkDB and Node.js. GitHub - neumino/rethinkdbdash: An advanced Node.js driver for RethinkDB with a connection pool, support for streams etc. Developer Preview: RethinkDB now available for Windows - RethinkDB. How to install Windows RethinkDB - WBD. RethinkDB is a new family member Non-SQL that promises to improve the ecosystem lot with an excellent system of queries and its ability to be easily deployed on multiple nodes, so that we can create a database distributed with little effort. 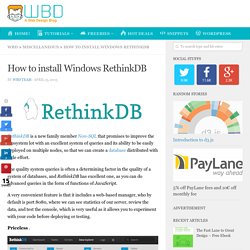 The quality system queries is often a determining factor in the quality of a system of databases, and RethinkDB has excellent one, as you can do advanced queries in the form of functions of JavaScript. A very convenient feature is that it includes a web-based manager, who by default is port 8080, where we can see statistics of our server, review the data, and test the console, which is very useful as it allows you to experiment with your code before deploying or testing. Priceless . RethinkDB is available for many operating systems, but for the moment has no native support for Windows. Then you must allocate the amount of memory you will devote to the virtual machine, if your machine allows, I recommend allocating at least 2048 mb.

Using RethinkDB with ExpressJS. How to Use RethinkDB with Node.js Applications. This article was peer reviewed by Agbonghama Collins and Martín Martínez. 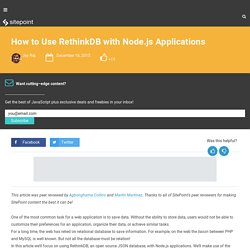 Thanks to all of SitePoint’s peer reviewers for making SitePoint content the best it can be! One of the most common task for a web application is to save data. Without the ability to store data, users would not be able to customize their preferences for an application, organize their data, or achieve similar tasks. For a long time, the web has relied on relational database to save information.

For example, on the web the liason between PHP and MySQL is well known. But before starting, let’s have a look at what RethinkDB is and where we might want to use it. Cookbook for JavaScript. Don’t see the recipe you’re looking for? 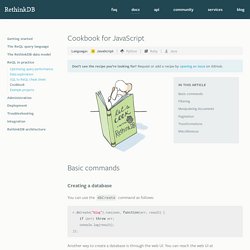 Request or add a recipe by opening an issue on GitHub. Creating a database You can use the dbCreate command as follows: r.dbCreate("blog").run(conn, function(err, result) { if (err) throw err; console.log(result);}); Ten-minute guide with RethinkDB and JavaScript. For a more detailed look, make sure to read the quickstart. 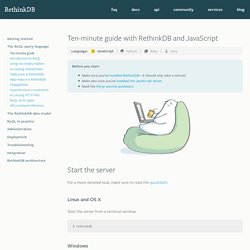 Linux and OS X Start the server from a terminal window. How to validate user input in a NoSQL web application - RethinkDB. Build real-time Web apps with RethinkDB. RethinkDB is an open source database for the real-time Web. 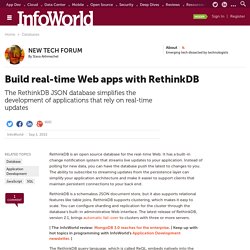 It has a built-in change notification system that streams live updates to your application. Instead of polling for new data, you can have the database push the latest to changes to you. The ability to subscribe to streaming updates from the persistence layer can simplify your application architecture and make it easier to support clients that maintain persistent connections to your back end.