Lego car, android & arduino thru bluetooth remote controlled. Arduino-info - IR-RemoteControl. Here's the pinout for almost every 3-pin IR Receiver: (Below, Left) is a link to a typical IR Receiver Spec Sheet: (Above): a diagram of connecting the receiver to an Arduino. 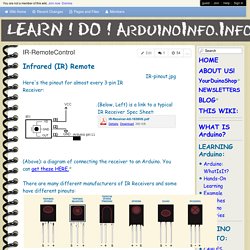 You can get these HERE. There are many different manufacturers of IR Receivers and some have different pinouts: Arduino and Infra-red control. Learn how to use Arduino and infra-red remote controls in chapter thirty-two of a series originally titled “Getting Started/Moving Forward with Arduino!” 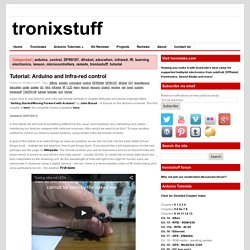 By John Boxall – A tutorial on the Arduino universe. The first chapter is here, the complete series is detailed here. Updated 10/07/2013. Hardware: Remote Control your Arduino « Your Warranty Is Void.com. Have a giant Arduino powered killbot, but can’t fancy being right next to it when you unleash it on the unsuspecting populace? 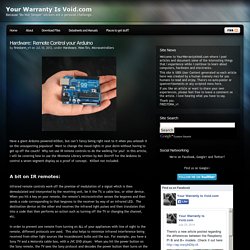 Want to change the mood-lights in your dorm without having to get up off the couch? Why not use IR remote controls to do the walking for you? In this article, I will be covering how to use the IRremote Library written by Ken Shirriff for the Arduino to control a seven segment display as a proof of concept. ButtonStateChange. Learning Examples | Foundations | Hacking | Links Examples > Digital I/O Button State Change Detection (Edge Detection) Once you've got a pushbutton working, you often want to do some action based on how many times the button is pushed.

To do this, you need to know when the button changes state from off to on, and count how many times this change of state happens. This is called state change detection or edge detection. An Arduino Library to Control the 28BYJ-48 Stepper Motor. Introduction First of all, this tip is an extended version for this great article --> Actually, it is not an alternative to the original version, but just a new version. 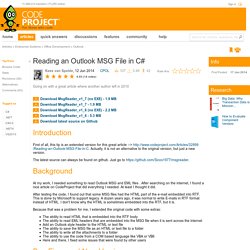 The latest source can always be found on github. Just go to Background At my work, I needed something to read Outlook MSG and EML files . Arduino’s map() Function and Numeric Distribution. The Arduino map() function is an interesting beast. 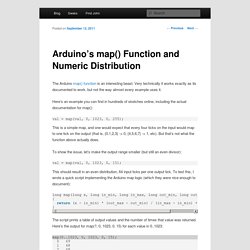 Very technically it works exactly as its documented to work, but not the way almost every example uses it. Here’s an example you can find in hundreds of sketches online, including the actual documentation for map(): This is a simple map, and one would expect that every four ticks on the input would map to one tick on the output (that is, {0,1,2,3} -> 0, {4,5,6,7} -> 1, etc). But that’s not what the function above actually does. To show the issue, let’s make the output range smaller (but still an even divisor): This should result in an even distribution, 64 input ticks per one output tick.

The script prints a table of output values and the number of times that value was returned. Servo Math. I have always seen things differently with my electronics and programming background. 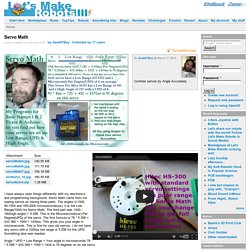 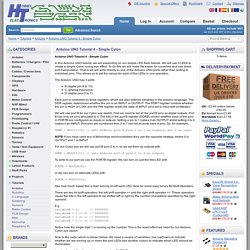 We will use 5 LEDs to create a simple Cylon roving eye effect. To do this we will make life easier for ourselves and use direct port manipulation. That is we will write directly to one of the Arduino UNO ports rather than writing to individual pins. This allows us to set the values for each of the LEDs in one operation. Arduino UNO Tutorial 2 - Servos. Arduino UNO Tutorial 2 - Servos Radio Control Servos are great pieces of kit. 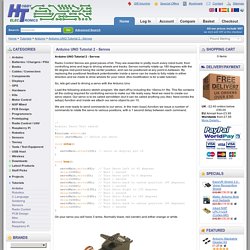 They are essential in pretty much every robot build, from controlling arms and legs to driving wheels and tracks. Servos normally rotate up 180 degrees with the 90 degree mid-point being the center position, and can be positioned at any point in-between. By replacing the positional feedback potentiometer inside a servo can be made to fully rotate in either direction and be made to drive wheels for your robot. IoBridgeSerialLCD. Fmalpartida / New LiquidCrystal. Index Wiki macro error: Could not find file Main Introduction Welcome to the LCD Library for Arduino and Chipkit. 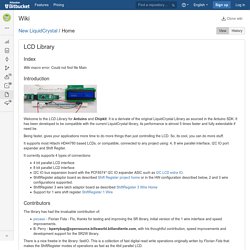 It is a derivate of the original LiquidCrystal Library as sourced in the Arduino SDK. It has been developed to be compatible with the current LiquidCrystal library, its performance is almost 5 times faster and fully extendable if need be. Being faster, gives your applications more time to do more things than just controlling the LCD. It supports most Hitachi HD44780 based LCDs, or compatible, connected to any project using: 4, 8 wire parallel interface, I2C IO port expander and Shift Regiter. It currently supports 4 types of connections: 4 bit parallel LCD interface 8 bit parallel LCD interface I2C IO bus expansion board with the PCF8574* I2C IO expander ASIC such as I2C LCD extra IO.

Contributors The library has had the invaluable contribution of: There is a nice freebe in the library: fastIO. Library Overview The library currently supports 3 types of connections: Usage. Arduino-info - Arduino-Libraries. NEW, Easier way to install Arduino Libraries (Link): NOTE! If you get a Library that is labelled "Master", like "RF24-Master.zip" you must RENAME the Zip file AND the folder inside it to remove the "-Master" part! Otherwise the new "Easy Install" will fail with "Library Name not allowed" etc. More LCD and I2C fun with the Arduino - Let's Make It - Episode 5.

28BYJ-48 Stepper Motor Control System Based On Arduino With ULN2003 Chip. Arduino uno r3. Servo motor control in Arduino. This example controls a servomotor. It moves a servomotor based on the value of an analog input. Thanks to Casey Reas for cleaning up the code. Thanks to Henryk Marstrander for the formula. Here’s a version that controls two servos. 28BYJ-48 Stepper Motor Disassembly. 28BYJ-48 Stepper Motor with ULN2003 driver and Arduino Uno. First, lets see the little steppers in action! Our main character, StepperBot, is “instructed” to move in a square path on my coffee table, making 90 degree turns at the corners. Turning exactly at the right time and by the right angle is critical avoid falling off and crashing on the floor in an embarrassing pile of messy wires. The robot has no sensors for positioning, orientation, or a way to detect the edges of the table. Movement is controlled only by the number of pre-defined steps in each direction hard-coded in the sketch.

This library gives you a simple way to drive spot lamps, floods, wall washers, lasers, smoke machines and more from a normal Arduino using DMX. Light Sequencing and Decoding DMX with an Arduino. Google Image Result for. Stepper Motor Basics. Introduction===========I find myself repeatedly typing similar replies to similar questions about the basics of stepper motors and I thought it would be useful to write this note as it will be a little more comprehensive than any individual reply.

Arduino_notebook_v1-1.pdf. 4tronix Arduino. // This Arduino example demonstrates bidirectional operation of a // 28BYJ-48, using a ULN2003 interface board to drive the stepper. // a factor of 68. BYJ48 Stepper Motor.