Orange Is The New Black

Big Boo Is The Butch Lea DeLaria Has Been Waiting To Play Her Whole Life. Orange Is the New Black's Latina characters are women we hardly ever see on television. Five years ago, Junot Diaz, the Pulitzer prize-winning author of The Brief and Wondrous Life of Oscar Wao, was speaking to students at Bergen Community College in New Jersey. 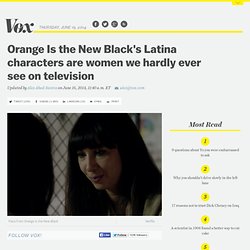 He was telling them about what it was like for him to watch TV growing up, when there were no people that looked like him on television. "You know, vampires have no reflections in a mirror? There's this idea that monsters don't have reflections in a mirror," he said. "It's that if you want to make a human being into a monster, deny them, at the cultural level, any reflection of themselves. And growing up, I felt like a monster in some ways. American television hasn't changed that much since Diaz gave that speech in 2009. "People get to see that we're not just one type. " One of the rare slivers of a reflection that non-white people and more specifically, non-white women, have is Netflix's Orange Is the New Black, whose second season is just out. 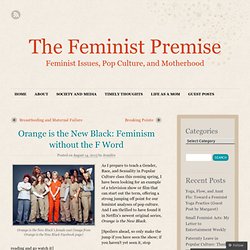 And I am thrilled to have found it in Netflix’s newest original series, Orange is the New Black. [Spoilers ahead, so only make the jump if you have seen the show; if you haven't yet seen it, stop reading and go watch it] Taylor Schilling (OITNB’s Piper) and Piper Kerman (image from fastcocreate.com) Smart ladies love to ask, why aren’t there more Jenji Kohans? Not, like, literally. 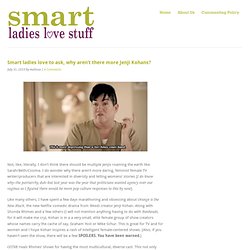 I don’t think there should be multiple Jenjis roaming the earth like Sarah/Beth/Cosima. I do wonder why there aren’t more daring, feminist female TV writer/producers that are interested in diversity and telling womens’ stories [I do know why--the patriarchy, duh--but last year was the year that politicians wanted agency over our vaginas so I figured there would be more pop culture responses to this by now]. Like many others, I have spent a few days marathoning and obsessing about Orange is the New Black, the new Netflix comedic drama from Weeds creator Jenji Kohan. Along with Shonda Rhimes and a few others (I will not mention anything having to do with Bunheads, for it will make me cry), Kohan is in a a very small, elite female group of show creators whose names carry the cache of say, Graham Yost or Mike Schur. 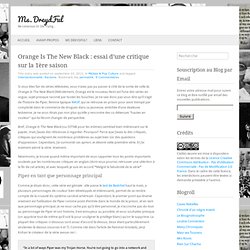 Mais non. The Feminist Griote » Orange is NOT the New Black. Full disclosure: At the time I wrote this post I was only 7 episodes in. 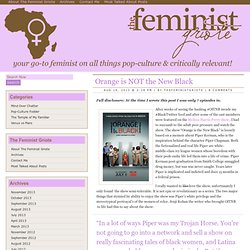 After weeks of seeing the hashtag #OITNB invade my #BlackTwitter feed and after some of the cast members were featured on the Melissa Harris-Perry show , I had to succumb to the adult peer pressure and watch the show. The show “Orange is the New Black” is loosely based on a memoir about Piper Kerman, who is the inspiration behind the character Piper Chapman. Both the fictionalized and real life Piper are white-middle-class ivy league women whose boredom with their posh cushy life led them into a life of crime. Piper Kerman post-graduation from Smith College smuggled drug money, but was was never caught.