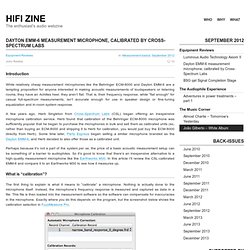 That is, their frequency response, while “flat enough” for casual full-spectrum measurements, isn’t accurate enough for use in speaker design or fine-tuning equalization and in-room system response. A few years ago, Herb Singleton from Cross-Spectrum Labs (CSL) began offering an inexpensive microphone calibration service. Herb found that calibration of the Behringer ECM-8000 microphone was sufficiently popular that he began to purchase the microphones in bulk and sell them as calibrated units (so, rather than buying an ECM-8000 and shipping it to Herb for calibration, you would just buy the ECM-8000 directly from Herb).

What is “calibration”? The first thing to explain is what it means to “calibrate” a microphone. Figure 1. An Overview of Microphone Technology Plus Links.

Most of the DIY projects starts from the diagram proposed by Mr. Linkwitz. – marcodellarocca

I also added a few pointers for constructing a tone-burst signal source and a receiver with microphone and fast peak meter for those of you, who would like to build some versatile acoustic test equipment. 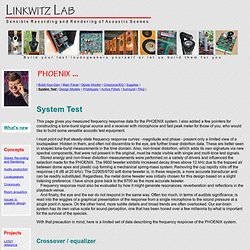 I must point out that steady-state frequency response curves - magnitude and phase - present only a limited view of a loudspeaker. Hidden in them, and often not discernible to the eye, are further linear distortion data. These are better seen in shaped tone-burst measurements in the time domain. With that precaution in mind, here is a limited set of data describing the frequency response of the PHOENIX system. Crossover / equalizer The crossover/equalizer corrects for trends in the frequency response. 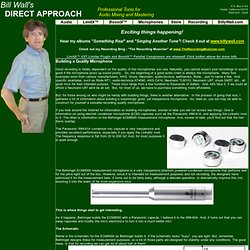 Naturally, you cannot expect your recordings to sound good if the microphone picks up sound poorly. So, the beginning of a good audio chain is always the microphone. Many fine examples exist from various manufacturers, AKG, Shure, Neumann, audio-tecnica, earthworks, Rode,...just to name a few. And specific examples, such as Rode NT1, audio-technica AT4040, AKG C414, Neumann TLM103, Neumann U87, shure SM57, etc., all great mics for their intended purpose. But, for those among us who might be handy with building things, there is another alternative. If you look around the Internet for information on building microphones, sooner or later you will run across two things. The Panasonic WM-61A condenser mic capsule is very inexpensive and provides excellent performance, especially if you apply the Linkwitz mod. This is where things start to get interesting. The Schematic The Linkwitz Mod. DIY (Do It Yourself) Microphones. Helm Key Audio. 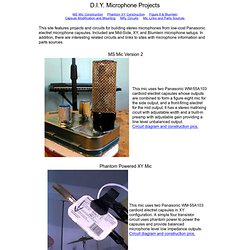 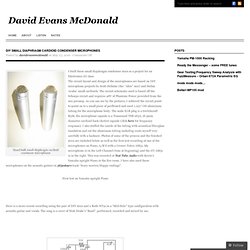 The circuit layout and design of the microphones are based on DIY microphone projects by Scott Helmke (the “Alice” mic) and Stefan Avalos’ small cardioids. The circuit schematic used is based off the Schoeps circuit and requires 48V of Phantom Power provided from the mic preamp. First test on Yamaha upright Piano Here is a more recent recording using the pair of DIY mics and a Rode NT1a in a “Mid-Side” type configuration with acoustic guitar and vocals. Circuit schematic Circuit parts aluminum tubing.