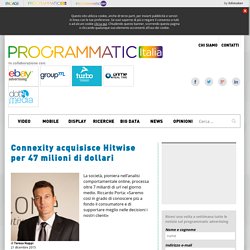 Advertisers. Early Prediction of Movie Box Office Success Based on Wikipedia Activity Big Data. Abstract Use of socially generated “big data” to access information about collective states of the minds in human societies has become a new paradigm in the emerging field of computational social science. 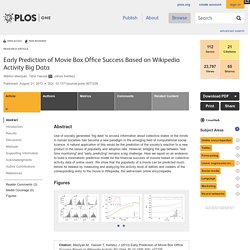 A natural application of this would be the prediction of the society's reaction to a new product in the sense of popularity and adoption rate. However, bridging the gap between “real time monitoring” and “early predicting” remains a big challenge. Here we report on an endeavor to build a minimalistic predictive model for the financial success of movies based on collective activity data of online users. We show that the popularity of a movie can be predicted much before its release by measuring and analyzing the activity level of editors and viewers of the corresponding entry to the movie in Wikipedia, the well-known online encyclopedia. Citation: Mestyán M, Yasseri T, Kertész J (2013) Early Prediction of Movie Box Office Success Based on Wikipedia Activity Big Data.

Why Facebook and Twitter Are Practically Useless Compared to EmailDigital Music News. Artists spent years cultivating their Facebook followings, only to discover they had to pay to reach their own fans. 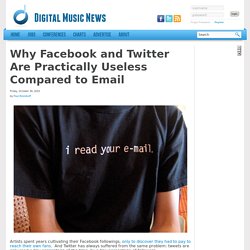 And Twitter has always suffered from the same problem: tweets are only read a tiny percentage of the time, by a tiny percentage of followers. But the worst part about these platforms is this: you don’t own your followers, because you don’t control the platform upon which they exist. Which means the rules around how you can communicate with them can change overnight, just like they did with Facebook. “Email marketing is 40 times as effective as Facebook and Twitter, combined.” The opposite is true with email, where you not only own your list and the rules around it, but people read them.

Nelle terre degli orsi polari, dove vivere e morire è vietato. Native Gmail ads arrive in AdWords for all advertisers. Email is a big part of our everyday routines as a go-to place for staying in touch with family, friends and colleagues. 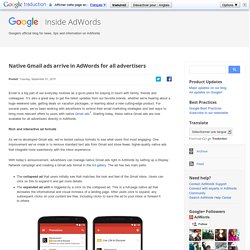 It’s also a great way to get the latest updates from our favorite brands, whether we’re hearing about a huge weekend sale, getting deals on vacation packages, or learning about a new cutting-edge product. For several years, we’ve been working with advertisers to extend their email marketing strategies and test ways to bring more relevant offers to users with native Gmail ads1. Starting today, these native Gmail ads are now available for all advertisers directly in AdWords.Rich and interactive ad formats As we’ve developed Gmail ads, we’ve tested various formats to see what users find most engaging.

One improvement we’ve made is to remove standard text ads from Gmail and show fewer, higher-quality native ads that integrate more seamlessly with the inbox experience. Content Marketing Resources Center. Il ristorante più bello del mondo? In una chiesa abbandonata - Foto di CorriereCucina.it. Skyword Platform: Content Marketing Software for Global Companies. About Us - TravelChannel.com. Travel Channel celebrates and is inspired by explorers and their passion for travel, curiosity about the world and unique points of view. 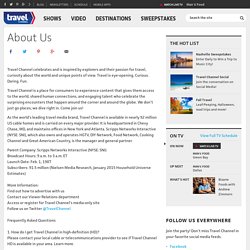 Travel is eye-opening. Curious. Daring. Fun. Travel Channel is a place for consumers to experience content that gives them access to the world, shared human connections, and engaging talent who celebrate the surprising encounters that happen around the corner and around the globe. As the world's leading travel media brand, Travel Channel is available in nearly 92 million US cable homes and is carried on every major provider.

Content Experiences That Work For Your Audience, Your Advertisers, And You. Travel Category Trends Tool: Air. CB-Insights-KPMG-Report-Q2-2015-VC-Report-Final-Version. Lily - The Camera That Follows You. Above Average - High Quality Comedy Videos, Clips and Articles. Ooyala IQ. Best Digital Marketing Experts to Follow. Inside the Company That's Made Viral Videos Big Business. Nate Granzow settles into his chair and taps a few keys on his keyboard. 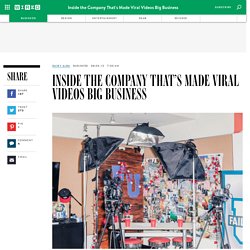 Two large computer screens blink to life. The left screen has a browser with so many open tabs it looks like a comb. Granzow clicks a tab, and up pops a list of 40 videos he must watch in the next hour. “Stingray scares little girl!” Reads the title of one YouTube clip. 5 charts: The shifting landscape of digital video consumption. Mobile, we’ve been told by publishers and consumers alike, is the future. 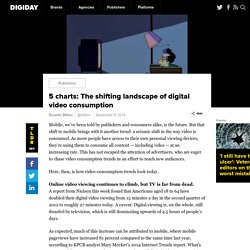 But that shift to mobile brings with it another trend: a seismic shift in the way video is consumed. As more people have access to their own personal viewing devices, they’re using them to consume all content — including video — at an increasing rate. This has not escaped the attention of advertisers, who are eager to chase video consumption trends in an effort to reach new audiences. Here, then, is how video-consumption trends look today. Online video viewing continues to climb, but TV is far from dead.A report from Nielsen this week found that Americans aged 18 to 64 have doubled their digital video viewing from 13 minutes a day in the second quarter of 2012 to roughly 27 minutes today. Demand Media has disrupted the publishing model with its data driven approach, expert freelance community, format innovation and best practices. Now brands and publishers can tap into these content solutions to inspire and. ExchangeWire: Data-Driven Advertising and Marketing Technology. 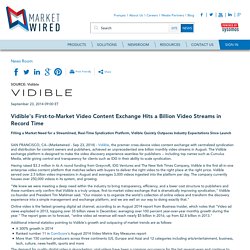 The Vidible exchange platform is designed to make the video discovery experience seamless for publishers -- including top names such as Cumulus Media, while giving control and transparency for clients such as IDG in their ability to scale syndication. Having raised $3.3 million in its A round funding from Greycroft, IDG Ventures and The New York Times Company, Vidible is the first all-in-one enterprise video content platform that matches sellers with buyers to deliver the right video to the right place at the right price. For more information, visit www.vidible.tv. Publishers want in on the content-recommendation game.

Building an online audience is tough for a publisher to do — if they care about having a reputable brand based on editorial content that people actually want to read and share. There are content-recommendation widgets from third parties like Outbrain and Taboola that publishers can slap on their sites. (Digiday uses Taboola to suggest related Digiday stories.) It’s easy money: Host publishers get paid when readers click out and can recycle some of their own content through the widgets. But these widgets have come under fire for purveying low-quality content and misleading ads that can downgrade readers’ trust in the site. Taboola had its own problems earlier this week when it fell victim to hacking. That’s why publishers have come forth to try to solve the audience problem. Advertisement. Crowd Ignite - Igniting New Audiences! Talenthouse.