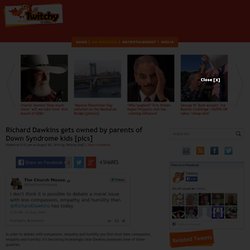 It’s becoming increasingly clear Dawkins possesses none of these qualities. @InYourFaceNYer Abort it and try again. It would be immoral to bring it into the world if you have the choice.— Richard Dawkins (@RichardDawkins) August 20, 2014 Before people started following this sort of shoddy “moral” advice, it was not uncommon to meet people with Down’s Syndrome, many of whom were leading productive and happy lives.

@AaronWorthing @Telegraph @RichardDawkins The charming Downs girl in my daughter's Job's Daughters troupe is a better person than Dawkins.— Angela Beegle (@chotiari) August 20, 2014. Richard Dawkins gets owned by parents of Down Syndrome kids [pics] Works and Days » Our ‘Face in the Crowd’ Elia Kazan’s classic A Face in the Crowd is a good primer on Barack Obama’s rise and fall. 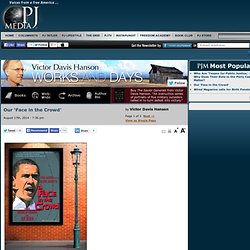 Articles: Barack Obama's Chilly Water Dilemma. Come to think of it, if Barack Obama responded as quickly to the ongoing genocide in Iraq as he did to Malia asking him if he “plugged the hole” in the Deep Water Horizon oil leak in the Gulf of Mexico or to the so-called atrocity of terrorists being waterboarded or to Robin Williams’ suicide, maybe thousands of Iraq’s indigenous Assyrian Christians wouldn’t be buried alive in mass graves. 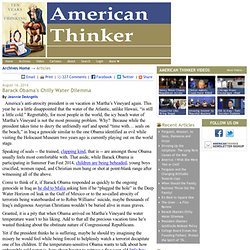 Steve Jobs: The World Class Asshole Who Dented The Universe [Walter Isaacson Biography Review] There have been a lot of complaints on Twitter that most of the best bits of Walter Isaacson’s biography of Steve Jobs have already leaked. 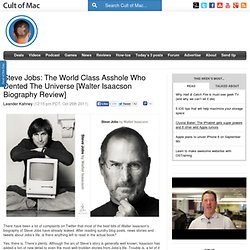 After reading sundry blog posts, news stories and tweets about Jobs’s life, is there anything left to read in the actual book? Yes, there is. There’s plenty. Although the arc of Steve’s story is generally well known, Isaacson has added a ton of new detail to even the most well-trodden stories from Jobs’s life. Thomas Frank Says Wall Street's Hyperconsumption Mocked American Values - WSJ. 5 Ways You're Sabotaging Your Own Life (Without Knowing It) #2. 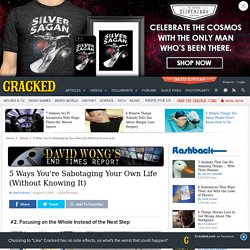 Focusing on the Whole Instead of the Next Step jojobob/iStock/Getty Images. John Kerry’s Pro-Hamas Ceasefire Proposal. You know there’s something going on when Haaretz, the flagship of the Israeli left, reads like it’s being edited by Dick Cheney. 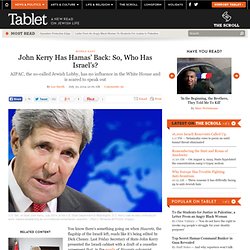 Last Friday Secretary of State John Kerry presented the Israeli cabinet with a draft of a ceasefire agreement that, in the words of Haaretz columnist Barak Ravid, “could have been penned by Khaled Meshal. It was everything Hamas could have hoped for.” The draft, Ravid explained, “recognized Hamas’ position in the Gaza Strip, promised the organization billions in donation funds and demanded no dismantling of rockets, tunnels or other heavy weaponry at Hamas’ disposal.” Accordingly, wrote another Haaretz columnist, Ari Shavit: “The Obama Administration proved once again that it is the best friend of its enemies, and the biggest enemy of its friends.” The fact is that Haaretz is simply in step with Israeli public opinion. Not surprisingly, the Palestinian Authority, in whose name Obama and Kerry are supposedly acting, was also furious with the administration. Qatar World Cup: migrants wait a year to be paid for building offices. Exclusive Migrant workers who built luxury offices used by Qatar's 2022 football World Cup organisers have told the Guardian they have not been paid for more than a year and are now working illegally from cockroach-infested lodgings. 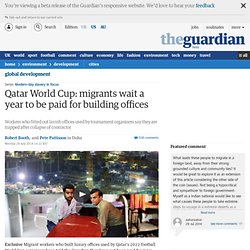 Officials in Qatar's Supreme Committee for Delivery and Legacy have been using offices on the 38th and 39th floors of Doha's landmark al-Bidda skyscraper – known as the Tower of Football – which were fitted out by men from Nepal, Sri Lanka and India who say they have not been paid for up to 13 months' work. The project, a Guardian investigation shows, was directly commissioned by the Qatar government and the workers' plight is set to raise fresh doubts over the autocratic emirate's commitment to labour rights as construction starts this year on five new stadiums for the World Cup. The offices, which cost £2.5m to fit, feature expensive etched glass, handmade Italian furniture, and even a heated executive toilet, project sources said. 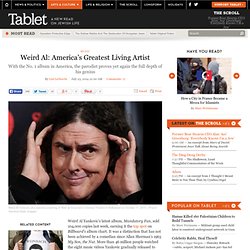 It was a distinction that has not been achieved by a comedian since Allan Sherman’s 1963 My Son, the Nut. More than 46 million people watched the eight music videos Yankovic gradually released to promote his work, and music journalists rushed to declare him newly relevant. Like Obama, the Transformers and the X-Men Now Believe in Doing Nothing. 4 Ways Hipster Activism Hurts the People It's Trying to Help. #2. 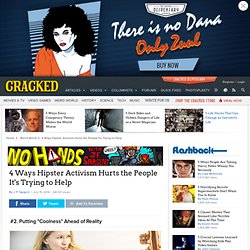 Putting "Coolness" Ahead of Reality Everste/iStock/Getty Images. 4 Ways Hipster Activism Hurts the People It's Trying to Help. I worked in what I guess is called the "social work" industry for about three years after college, and during that time I met a whole shitload of kind, smart, hard-working people who had dedicated their lives to making the world an objectively better place in exchange for virtually no money or recognition -- people like teachers, counselors for the homeless, and ... whatever you call a person who teaches 16-year-old-kids coming out of prison how to write a resume. 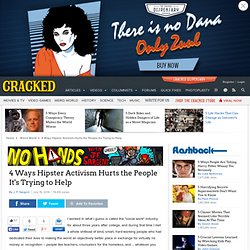 But I left, and once I did I realized that a lot of the kinds of social justice-y activism that we see and hear about in our day-to-day lives and on the Internet are really different from the actual work that gets done. And while I don't pretend to know how to solve the world's problems, I have a pretty good idea of what won't do that. For example, I'm pretty sure you're not going to get very far ... #4. Being Exploited by Evil mangostock/iStock/Getty Images Comstock Images/Stockbyte/Getty Fucking squid. #3.