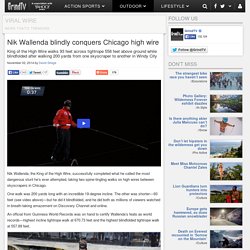 One walk was 200 yards long with an incredible 19-degree incline. The other was shorter—93 feet (see video above)—but he did it blindfolded, and he did both as millions of viewers watched in breath-taking amazement on Discovery Channel and online. An official from Guinness World Records was on hand to certify Wallenda’s feats as world records—highest incline tightrope walk at 670.73 feet and the highest blindfolded tightrope walk at 557.89 feet. 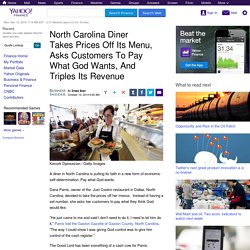 Dana Parris, owner of the Just Cookin restaurant in Dallas, North Carolina, decided to take the prices off her menus. Instead of having a set number, she asks her customers to pay what they think God would like. 5ft Cannabis Plant Accidentally Grown By Devon Grandmother. Man fined for pretending to be ghost in cemetery. Man Sues Close-up Toothpaste After Failing To Attract Single Girls - METRO NAIJAMETRO NAIJA. In what could prove to be a major marketing and legal embarrassment for Unilever Nigeria Limited (UNL), a 26-year-old man has filed a case against the company, which owns the Close Up toothpaste brand, for ‘cheating’ and causing him ‘mental suffering’. 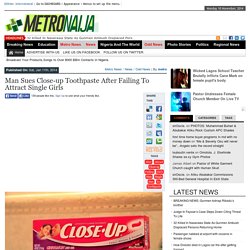 The plaintiff has cited his failure to attract any girl at all even though he’s been using Close-Up toothpaste for over seven years now. Close-Up advertisements suggest that the product helps men in instantly attracting women by letting their breaths out. Quite Interesting News, Page 10. Lost Masterpiece Painting Found in the Background of 1999 Film 'Stuart Little' Hugh Laurie, Jonathan Lipnicki, and Geena Davis in 1999’s Stuart Little, with the mysterious missing painting in the background Though it only received lukewarm reviews from critics upon its 1999 release, it turns out that the children’s movie Stuart Little did contain at least one masterpiece. 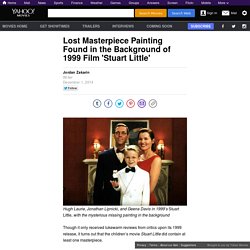 Gergely Barki, a researcher at the Hungarian national gallery, was watching Rob Minkoff’s family comedy with his daughter in 2009 when he noticed what appeared to be, remarkably, a famous missing painting by the Hungarian avant-garde artist Róbert Berény on the wall of the Little family home. Barki couldn’t be sure, having only seen the painting in an old black and white photograph. (It went missing in the 1920s; Barki thought the original buyer was potentially Jewish and fled Hungary with the painting either before or during World War II.) The researcher was curious enough to email the studios behind the film, Sony and Columbia. 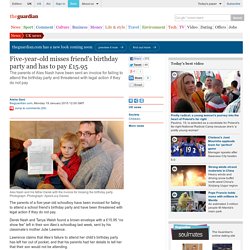 Derek Nash and Tanya Walsh found a brown envelope with a £15.95 “no show fee” left in their son Alex’s schoolbag last week, sent by his classmate’s mother Julie Lawrence. Lawrence claims that Alex’s failure to attend her child’s birthday party has left her out of pocket, and that his parents had her details to tell her that their son would not be attending. 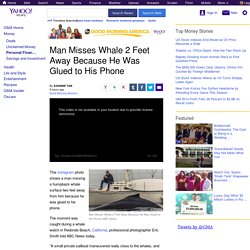 The moment was caught during a whale watch in Redondo Beach, California, professional photographer Eric Smith told ABC News today. 13 Freaky Things That Happened on Friday the 13th. Friggatriskaidekaphobics, beware: Today is the first of three Friday the 13ths this year. 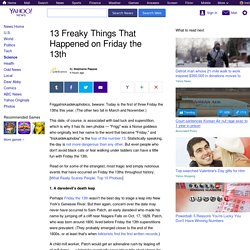 (The other two fall in March and November.) This date, of course, is associated with bad luck and superstition, which is why it has its own phobia — "Frigg" was a Norse goddess who originally lent her name to the word that became "Friday," and "triskaidekaphobia" is the fear of the number 13. Statistically speaking, the day is not more dangerous than any other. But even people who don't avoid black cats or fear walking under ladders can have a little fun with Friday the 13th. Read on for some of the strangest, most tragic and simply notorious events that have occurred on Friday the 13ths throughout history.

Fraudster released rat in Sunderland restaurant to get free meal. The owner of a bistro smelled a rat when a customer pulled a rodent from his pocket and shouted out in alarm in an attempt to get a free meal. 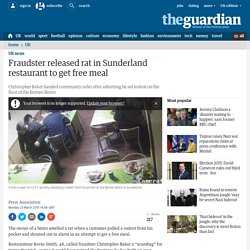 Restaurateur Kevin Smith, 48, called fraudster Christopher Baker a “scumbag” for trying the trick, saying it could have ruined the business he has built up over seven years. Baker, 28, from Houghton, Tyne and Wear, pleaded guilty to fraud by false representation at Sunderland magistrates court last week, officials confirmed. He was handed a 12-month community order with a rehabilitation activity requirement, ordered to pay a £60 victim surcharge and £7.25 compensation – the cost of his meal – to the restaurant. Dying Man Leaves His Pals $5,300 to Go On Boozy Vacation. When Roger Brown was preparing his last will and testament, he wanted his friends to know how much he cared about them. 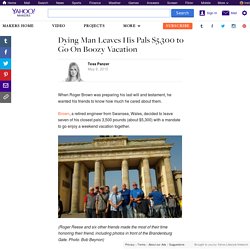 Brown, a retired engineer from Swansea, Wales, decided to leave seven of his closest pals 3,500 pounds (about $5,300) with a mandate to go enjoy a weekend vacation together. (Roger Reese and six other friends made the most of their time honoring their friend, including photos in front of the Brandenburg Gate. Photo: Bob Beynon) A postman collected pebbles every day for 33 years and what he created is astounding. Couple gets $75.90 bill for wedding they didn't attend.

After the cake has been wrapped up, the champagne popped and the chicken-or-fish dinner eaten, most wedding guests get a thank you note in the mail. 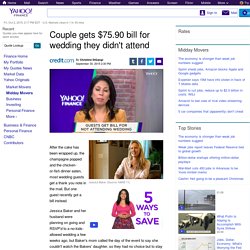 But one guest recently got a bill instead. Jessica Baker and her husband were planning on going and RSVP'd to a no-kids-allowed wedding a few weeks ago, but Baker's mom called the day of the event to say she couldn't watch the Bakers' daughter, so they had no choice but to stay home, reports KARE 11 in Minneapolis. Then earlier this week, Baker received a bill for $75.90 — $60 total for the herb-crusted walleye she and her husband requested in their RSVP, plus a $7.95 fee per person for tax and the service charge.

"This cost reflects the amount paid by bride and groom for meals that were RSVPed for, reimbursement and explanation for no show, card, call or text would be appreciated," the bill said. Baker laughed as she told the story to the KARE 11 reporter. British parrot missing for four years returns speaking Spanish. He said his bird went missing four years earlier. Little is known about Nigel's whereabouts the past four years, but Chick says the bird's British accent is gone, and it now chatters in Spanish. Chick says last week's reunion brought tears of joy to his eyes - despite the fact that Nigel bit him when he first tried to pick him up. Micco said the behavior was not unusual and that Nigel would settle back in soon enough.

"He's doing perfect," Chick told the newspaper by the week's end. Man Who Hasn't Showered in 12 Years Makes Us Question Everything We Know About Cleanliness.