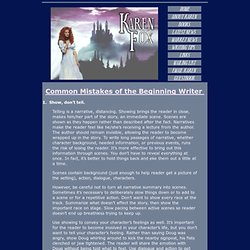 Show, don’t tell. Telling is a narrative, distancing. Showing brings the reader in close, makes him/her part of the story, an immediate scene. Scenes are shown as they happen rather than described after the fact. Narratives make the reader feel like he/she’s receiving a lecture from the author. 2. A lot of writers feel they have to describe everything about their main character when they first introduce him to include a full description, past life and personality description.

This also applies to exposition—scene, setting or background, which is another type of character. 3. Four major points of view 1st person (I) 2nd person (you) 3rd person (Jane)—recommended Omniscient (author’s)—used sometimes for setting scene but keeps reader from getting into story Purist stays in POV for entire scene—easier for reader to follow. The Writer and the Psychopath.

Alexandria Marzano-Lesnevich features The Writer and the Psychopath For the past several years, I have been writing about a murderer, an occupation of mine that has led to many cocktail party conversations. 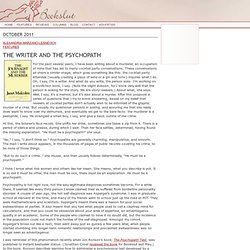 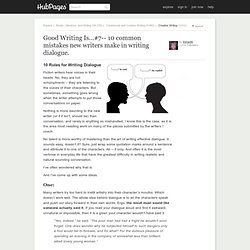 No, they are not schizophrenic – they are listening to the voices of their characters. But sometimes, something goes wrong when the writer attempts to put those conversations on paper. Nothing is more daunting to the new writer (or if it isn’t, should be) than conversation, and rarely is anything so mishandled. I know this is the case, as it is the area most needing work on many of the pieces submitted by the writers I coach. No talent is more worthy of mastering than the art of writing effective dialogue.

Common Writing Errors - Welcome authors, writers and would-be publishers ... come in, pull up a virtual seat & let's talk about the written word... Ten Creative Writing Activities. During the Fall, a couple teachers asked me to tackle a list of creative writing assignments. 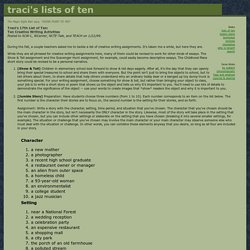 It's taken me a while, but here they are. While they are all phrased for creative writing assignments here, many of them could be revised to work for other kinds of essays. The Show & Tell assignment and the Scavenger Hunt assignment, for example, could easily become descriptive essays. The Childhood Place short story could be revised to be a personal narrative. [Show & Tell] Children in elementary school look forward to show & tell days eagerly. 10 Writing Exercises to Tighten Your Writing. By Brittiany Cahoon Writing projects can be like children. 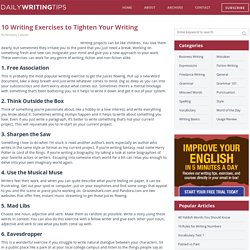 You love them dearly, but sometimes they irritate you to the point that you just need a break. Working on something fresh and new can invigorate your mind and give you a new approach to your work. These exercises can work for any genre of writing, fiction and non-fiction alike. 1. This is probably the most popular writing exercise to get the juices flowing. DFTBA Short Story Contest. Dear all This post comes to you in two parts, so lets get right to it! 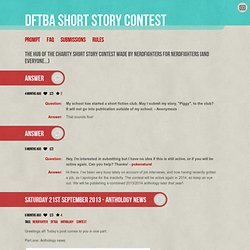 Part one! Inspiration Waystation So I am frustratingly aware of the fact that I have been really bad when it comes to updating the blog for inspiration waystation. Kayleyhyde: Booktuber Channel? Affect Versus Effect. I get asked whether to use affect or effect all the time, and it is by far the most requested grammar topic, so I have a few mnemonics and a cartoon to help you remember. 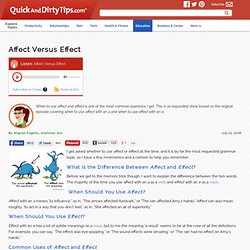 What Is the Difference Between Affect and Effect? Before we get to the memory trick though, I want to explain the difference between the two words: The majority of the time you use affect with an a as a verb and effect with an e as a noun. When Should You Use Affect? Affect with an a means "to influence," as in, "The arrows affected Aardvark," or "The rain affected Amy's hairdo. " Poets in Performance. Over the years, Bill Moyers has welcomed some of America’s best poets to share their works and inspiration. 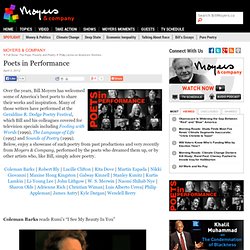 Many of those writers have performed at the Geraldine R. Dodge Poetry Festival, which Bill and his colleagues covered for television specials including Fooling with Words (1999), The Language of Life (1995) and Sounds of Poetry (1999). Edittorrent: Marks of the amateur. By popular demand-- This is something I'd never really contemplated before becoming an editor, but every editor I've spoken to since knew immediately what I meant. That is, "What tips you off about a submission that this isn't an experienced writer? What are the marks of the amateur? " Now I don't mean to be insulting here. These marks don't actually mean that the writer is an amateur, rather that we see these mostly in submissions by newer or inexperienced authors, and so we sort of automatically assume.... well.