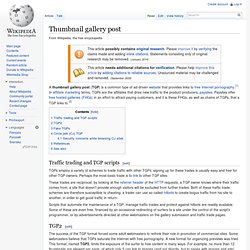 Paysites offer free hosted galleries (FHGs) in an effort to attract paying customers, and it is these FHGs, as well as chains of TGPs, that a TGP links to.[2] Traffic trading and TGP scripts[edit] TGPs employ a variety of schemes to trade traffic with other TGPs; signing up for these trades is usually easy and free for other TGP owners. Perhaps the most basic trade is to link to other TGP sites. These trades are reciprocal: by looking at the referrer header of the HTTP requests, a TGP owner knows where their traffic comes from; a site that doesn't provide enough visitors will be excluded from further trades. 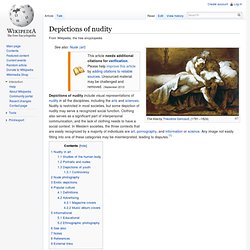 Nudity is restricted in most societies, but some depiction of nudity may serve a recognized social function. Clothing also serves as a significant part of interpersonal communication, and the lack of clothing needs to have a social context. In Western societies, the three contexts that are easily recognized by a majority of individuals are art, pornography, and information or science. Any image not easily fitting into one of these categories may be misinterpreted, leading to disputes.[1] Nudity in art[edit] A myth is a sacred narrative explaining how the world and humankind assumed their present form.[12][13] The myth can be defined as an "ideology in narrative form".[14] Myths may arise as either truthful depictions or overelaborated accounts of historical events, as allegory for or personification of natural phenomena, or as an explanation of ritual.

Art nude. The nude figure is mainly a tradition in Western art, and has been used to express ideals of male and female beauty and other human qualities. 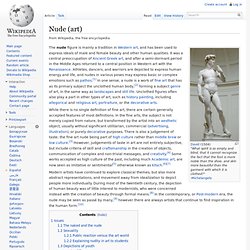 It was a central preoccupation of Ancient Greek art, and after a semi-dormant period in the Middle Ages returned to a central position in Western art with the Renaissance. Athletes, dancers, and warriors are depicted to express human energy and life, and nudes in various poses may express basic or complex emotions such as pathos.[1] In one sense, a nude is a work of fine art that has as its primary subject the unclothed human body,[2] forming a subject genre of art, in the same way as landscapes and still life. Nude photography. Nude photography is any photograph which contains an image of a nude or semi-nude person, or an image suggestive of nudity. 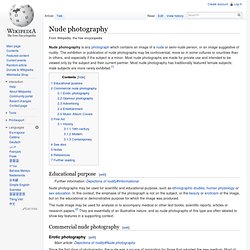 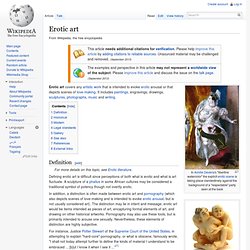 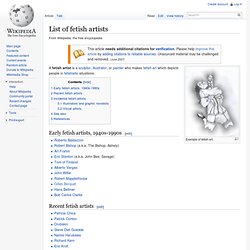 Nudity Is Healthy for Brains and Bodies. Is clothing crushing us? 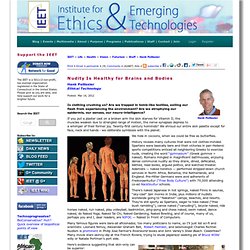 Are we trapped in tomb-like textiles, exiling our flesh from experiencing the environment? Are we atrophying our epidermis, our senses, our neuro-intelligence? If you put a plaster cast on a broken arm the skin starves for Vitamin D, the muscles weaken due to strangled range of motion, the nerve synapses depress to a whimper of their former joy. Twenty-first century hominids? We shroud our entire skin palette except for face, neck and hands - we obliterate symbiosis with the planet. We hide in cocoons, when we could be free as butterflies. History reveals many cultures that were not clothes-minded. There’s naked Japanese in hot springs, naked Finns in saunas, “sky-clad” Jain monks in India, plus millions of nudists worldwide going to “Nakation” camps, beaches, and resorts. Here’s evidence suggesting that skin-only can be superior: Born Free.