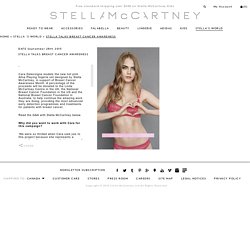 A percentage of the proceeds will be donated to the Linda McCartney Centre in the UK, the National Breast Cancer Foundation in the US and the National Breast Cancer Foundation in Australia, to help continue the amazing work they are doing, providing the most advanced early detection programmes and treatments for patients with breast cancer. Read the Q&A with Stella McCartney below. Why did you want to work with Cara for this campaign? ‘We were so thrilled when Cara said yes to this project because she represents a generation of young women that we are really trying to reach and catch the attention of. 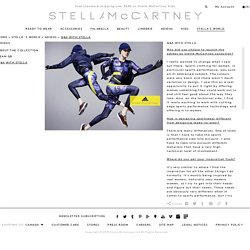 I really wanted to change what I saw out there. Sports clothing for women, in particular sports performance, was such an ill addressed subject. The colours were very basic and there wasn’t much variation in design. I saw this as a real opportunity to put it right by offering women something they could work out in and still feel good about the way they look. Also, on the technical side, I find it really exciting to work with cutting edge sports performance technology and offering it to women. How is designing sportswear different from designing ready-to-wear? There are many differences. Where do you get your inspiration from? It’s very similar to where I find the inspiration for all the other things I do normally. WINTER 2015 CAMPAIGN. 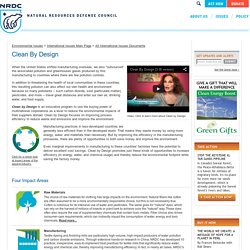 In addition to threatening the health of local communities in these countries, this resulting pollution can also affect our own health and environment because so many pollutants -- such carbon dioxide, soot (particulate matter), pesticides, and more -- travel great distances and enter our own air, drinking water, and food supply. Clean by Design is an innovative program to use the buying power of multinational corporations as a lever to reduce the environmental impacts of their suppliers abroad. Clean by Design focuses on improving process efficiency to reduce waste and emissions and improve the environment. Manufacturing practices in less-developed countries are generally less efficient than in the developed world. Peta. Bob Barker: Stop Torturing Baby Monkeys In a new ad for PETA, TV icon Bob Barker calls for an end to cruel maternal-deprivation experiments on infant monkeys by the National Institutes of Health. 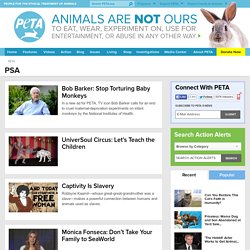 Captivity Is Slavery Robbyne Kaamil—whose great-great-grandmother was a slave—makes a powerful connection between humans and animals used as slaves. ©Ruven Afanador/Corbis I’m Vegan With so many reasons to try vegan, which one will you choose? Ali MacGraw: Evacuations Ali MacGraw sends an impassioned plea for people to take their animals with them if they must evacuate their homes. Marc Maron: Spay/Neuter PSA An animated Marc Maron asks viewers to give “a sh*t and [do] the right thing” by having animal companions spayed or neutered for their health and happiness.

©StarMaxInc.com. Stella McCartney Takes On the Leather Trade. Company Statement - Stella McCartney. We are committed to being a responsible, honest, and modern company.What this means to us: Responsible We understand that it is our responsibility to do what we can to become a more sustainable company. 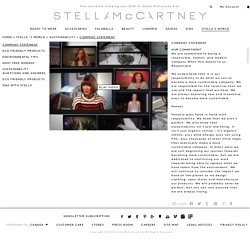 We are responsible for the resources that we use and the impact that we have. We are always exploring new and innovative ways to become more sustainable. Honest Honesty goes hand in hand with responsibility. Modern We think that being modern means considering the future, not just the future of design, but also the future of the planet. In our consistent effort to be more a more sustainable and ethical company, these are a few of the things that we are doing today: All Stella McCartney stores, offices and studios in the UK are powered by wind energy that is provided by Ecotricity, a company that invests the money its customers spend on electricity into clean forms of power like wind.