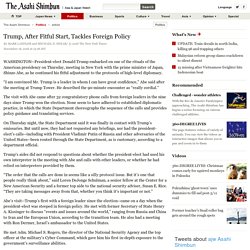 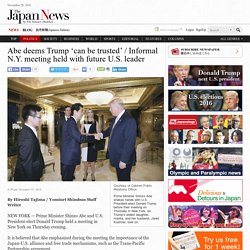 President-elect Donald Trump held a meeting in New York on Thursday evening. It is believed that Abe emphasized during the meeting the importance of the Japan-U.S. alliance and free trade mechanisms, such as the Trans-Pacific Partnership agreement. After the meeting with Trump, Abe told reporters, “It gave me confidence that the two of us can build a relationship of trust.” A Okinawa, les espoirs d’une présidence Trump. A Okinawa, les espoirs d’une présidence Trump. TRUMP ERA: Abe cites China's strength in a bid to keep the U.S. in TPP talks：The Asahi Shimbun.

Prime Minister Shinzo Abe has threatened to focus on an Asia-centered trade deal if U.S. 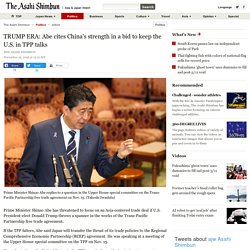 President-elect Donald Trump throws a spanner in the works of the Trans-Pacific Partnership free trade agreement. If the TPP falters, Abe said Japan will transfer the thrust of its trade policies to the Regional Comprehensive Economic Partnership (RCEP) agreement. He was speaking at a meeting of the Upper House special committee on the TPP on Nov. 15. China angered at UNESCO talks on Japan islands for special status：The Asahi Shimbun. China, citing a territorial dispute with Japan, took exception to discussions in Paris on plans by Tokyo to nominate four islands as possible additions to UNESCO's list of world natural heritage sites. 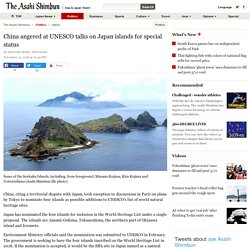 Japan has nominated the four islands for inclusion in the World Heritage List under a single proposal. The islands are Amami-Oshima, Tokunoshima, the northern part of Okinawa island and Iriomote. COMMENTARY/ ‘Trump shock’ exposes divisions straining our democracies：The Asahi Shimbun. The 2016 U.S. presidential election seemed so superficial in many ways, but in others, very serious. 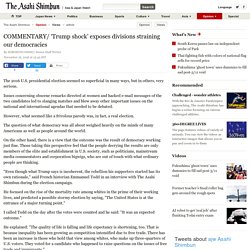 Issues concerning obscene remarks directed at women and hacked e-mail messages of the two candidates led to slanging matches and blew away other important issues on the national and international agendas that needed to be debated. However, what seemed like a frivolous parody was, in fact, a real election. The question of what democracy was all about weighed heavily on the minds of many Americans as well as people around the world. On the other hand, there is a view that the outcome was the result of democracy working just fine. Those taking this perspective feel that the people decrying the results are only members of the elite and establishment in U.S. society, such as politicians, mainstream media commentators and corporation bigwigs, who are out of touch with what ordinary people are thinking. Abe aims to underscore importance of Japan-U.S. alliance with Trump：The Asahi Shimbun. Japanese Prime Minister Shinzo Abe aims to underscore the importance of the Japan-U.S. alliance when he meets President-elect Donald Trump on Thursday, Foreign Minister Fumio Kishida said on Sunday. 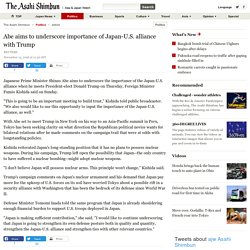 "This is going to be an important meeting to build trust," Kishida told public broadcaster. "We also would like to use this opportunity to input the importance of the Japan-U.S. alliance, as well. " With Abe set to meet Trump in New York on his way to an Asia-Pacific summit in Peru, Tokyo has been seeking clarity on what direction the Republican political novice wants for bilateral relations after he made comments on the campaign trail that were at odds with longstanding policies. Kishida reiterated Japan's long-standing position that it has no plans to possess nuclear weapons. SDF get go ahead for risky new security mission to South Sudan：The Asahi Shimbun. The Cabinet has authorized the first expansion of duties for Self-Defense Force troops dispatched overseas since controversial national security legislation was enacted in September 2015. 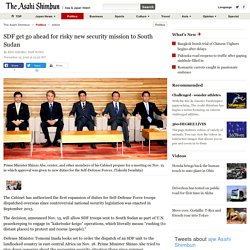 The decision, announced Nov. 15, will allow SDF troops sent to South Sudan as part of U.N. peacekeeping to engage in "kaketsuke-keigo" operations, which literally means "rushing (to distant places) to protect and rescue (people). " Defense Minister Tomomi Inada looks set to order the dispatch of an SDF unit to the landlocked country in east-central Africa on Nov. 18. Abe, Trump agree to hold meeting in New York on Nov. 17：The Asahi Shimbun. Prime Minister Shinzo Abe and U.S. 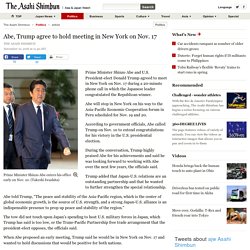 President-elect Donald Trump agreed to meet in New York on Nov. 17 during a 20-minute phone call in which the Japanese leader congratulated the Republican winner. Abe will stop in New York on his way to the Asia-Pacific Economic Cooperation forum in Peru scheduled for Nov. 19 and 20. According to government officials, Abe called Trump on Nov. 10 to extend congratulations for his victory in the U.S. presidential election. 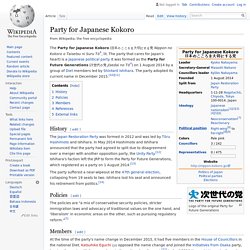 , lit. The party that cares for Japan's heart) is a Japanese political party. It was formed as the Party for Future Generations (次世代の党, Jisedai no Tō?) Japan Innovation Party. History[edit] When it was founded, the Japan Innovation Party was led by Kenji Eda and Osaka city mayor Tōru Hashimoto. 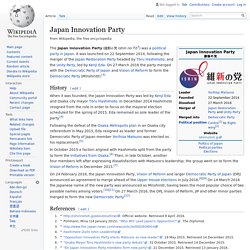 In December 2014 Hashimoto resigned from the role in order to focus on the mayoral election scheduled for the spring of 2015. Eda remained as sole leader of the party.[4] Following the defeat of the Osaka Metropolis plan in an Osaka city referendum in May 2015, Eda resigned as leader and former Democratic Party of Japan member Yorihisa Matsuno was elected as his replacement.[5] In October 2015 a faction aligned with Hashimoto split from the party to form the Initiatives from Osaka.[6] Then, in late October, another four members left after expressing dissatisfaction with Matsuno's leadership; the group went on to form the Vision of Reform in December 2015.[7] Initiatives from Osaka. Initiatives from Osaka (おおさか維新の会, Ōsaka ishin no kai?) Is a Japanese political party that was formed in October 2015.[1] by Osaka governor Ichiro Matsui and then-Osaka mayor Toru Hashimoto after they and their supporters left the Japan Innovation Party.[2] It bears the same Japanese name as the Osaka Restoration Association, which was also formed by Hashimoto, but is differentiated by writing "Osaka" in hiragana (おおさか) rather than in kanji (大阪).[1] References[edit] External links[edit] Initiatives from Osaka (Japanese)

Asahi exit poll: 49% support constitutional amendment：The Asahi Shimbun. Forty-nine percent of voters in the July 10 Upper House election said the Constitution should be amended, according to an Asahi Shimbun exit poll. The survey also showed that 44 percent were opposed to constitutional amendment, a goal of Prime Minister Shinzo Abe. However, the poll found that revising the Constitution was not the central issue for voters when deciding which party to support in the Upper House election. It showed that 70 percent of voters in favor of constitutional amendment said they cast their ballots for the four pro-revision parties--Abe’s Liberal Democratic Party, junior coalition partner, Komeito, Initiatives from Osaka and the Party for Japanese Kokoro--in the proportional representation portion.

However, 40 percent of those who said they oppose revision also voted for the four parties. Ruling bloc retains majority in Japan's Upper House election. The Liberal Democratic Party-led ruling coalition scored a sweeping victory in the Upper House election Sunday that gave the Diet’s pro-revision forces the two-thirds majority needed to initiate Japan’s first constitutional referendum, final results showed Monday morning. Four parties in favor of constitutional revision, including the LDP-Komeito ruling bloc, won a combined 76 seats, adding to the current 88 held by pro-amendment forces in the uncontested half of the 242-seat Upper House.

Sunday’s election will increase the grand total of pro-revision forces in the Upper House to a supermajority of 164, a critical benchmark that will bring Prime Minister Shinzo Abe a huge step forward toward his longtime goal of amending the Constitution. Kyodo News reported that, in response to Sunday’s poll results, Abe is planning a full-fledged reshuffle of his Cabinet as early as August.

“We couldn’t appeal to enough voters,” Okada said. Okada rules out quitting DP helm over election drubbing; JCP says alliance just the first step. Katsuya Okada, president of the Democratic Party, said he will not resign immediately over the party’s disappointing showing in the Upper House election and failure to prevent forces in favor of constitutional reform from securing a two-thirds majority.

The party appears to have derived some benefit from its unprecedented electoral alliance with the Japanese Communist Party and two other opposition parties that coordinated the fielding of candidates in single-seat districts, with Okada saying late Sunday he hopes to carry over such cooperation to the next general election. The Democratic Party suffered a decline from the 60 seats it held in the 242-member chamber prior to the election, while the JCP ended with three more seats at 14.

“I’m disappointed that we couldn’t block (the pro-revision forces),” Okada said, admitting that his party’s ability to deliver its message to voters was “weak.” Upper House election exit poll highlights divide over constitutional revision. A Jiji exit poll has highlighted a divide over changing the nation’s pacifist Constitution, with 36.0 percent of voters who cast their ballots in Sunday’s Upper House election saying they opposed revision and 29.6 percent voicing support.