What is Asperger Syndrome? A Reminder That "Arthur" Once Beautifully Described Asperger's Syndrome. 3 Things you need to know about people with Asperger. Source I’m going to ignore the fact that the DSM no longer includes Asperger’s as a diagnosis. 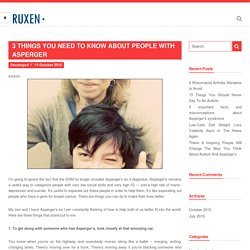 Asperger’s remains a useful way to categorize people with very low social skills and very high IQ — and a high rate of manic-depression and suicide. It’s useful to separate out these people in order to help them. It’s like separating out people who have a gene for breast cancer. There are things you can do to make their lives better. My son and I have Asperger’s so I am constantly thinking of how to help both of us better fit into the world. 1. You know when you’re on the highway and everybody moves along like a ballet – merging, exiting, changing lanes. The Asperger car is the one on cruise control at exactly the speed limit. But there’s no way to tell that annoying car, “Hey, you’re breaking the law,” (because they’re not) and you can’t tell them, “Hey, you’re being inconsiderate,” (because they’ll say, “Well, that merging car could have slowed down until I got by.”)

How Asperger's Syndrome / High-Functioning Autism Affects Adults. This is one of the lengthier articles on this site. 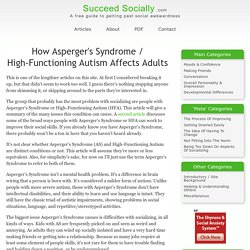 At first I considered breaking it up, but that didn't seem to work too well. I guess there's nothing stopping anyone from skimming it, or skipping around to the parts they're interested in. The group that probably has the most problem with socializing are people with Asperger's Syndrome or High-Functioning Autism (HFA). This article will give a summary of the many issues this condition can cause. A second article discusses some of the broad ways people with Asperger's Syndrome or HFA can work to improve their social skills. It's not clear whether Asperger's Syndrome (AS) and High-Functioning Autism are distinct conditions or not. ADHD: Raising a Neuro-typical vs. a Non-neurotypical Child. 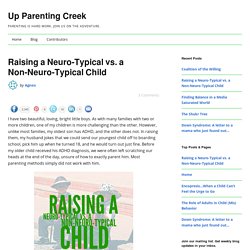 As with many families with two or more children, one of my children is more challenging than the other. However, unlike most families, my oldest son has ADHD, and the other does not. In raising them, my husband jokes that we could send our youngest child off to boarding school, pick him up when he turned 18, and he would turn out just fine.

Before my older child received his ADHD diagnosis, we were often left scratching our heads at the end of the day, unsure of how to exactly parent him. Most parenting methods simply did not work with him. Child Psychologists, C.B. Suppose a child with ADHD and a classmate are both eating pudding and become silly. While I have never had a “pudding” experience, the psychologists summed up the experience of parenting my two children perfectly. Perhaps the most difficult part about parenting my two children is the disparate ways that people react to them. *C.B. Is it Asperger's Syndrome and/or ADD ADHD? Slide 1 of 5 ADDitude magazine Some parents wonder whether their child with attention deficit hyperactivity disorder (ADHD) may have some form of autism. 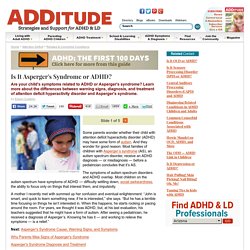 And they wonder for good reason: Most families of children with Asperger’s syndrome (AS), an autism spectrum disorder, receive an ADHD diagnosis — or misdiagnosis — before a pediatrician concludes that it’s AS. The symptoms of autism spectrum disorders and ADHD overlap. Most children on the autism spectrum have symptoms of ADHD — difficulty settling down, social awkwardness, the ability to focus only on things that interest them, and impulsivity. A mother I recently met with summed up her confusion and eventual enlightenment: “John is smart, and quick to learn something new, if he is interested,” she says. Next: Asperger's Syndrome Cause, Warning Signs, and Symptoms Why Parents Miss Signs of Asperger's Syndrome.