Why Are You Afraid of the Sun? It seems that a lot of photographers tend to avoid direct sunlight and for a long time, I did too. 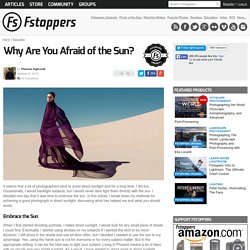 Occasionally, I would backlight subjects, but I would never dare light them directly with the sun. I decided one day that it was time to embrace the sun. In this article, I break down my methods for achieving a good photograph in direct sunlight, discussing what has helped me and what you should avoid. Embrace the Sun When I first started shooting portraits, I hated direct sunlight. 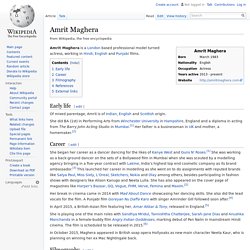 Early life[edit] Of mixed parentage, Amrit is of Indian, English and Scottish origin. She did BA (1st) in Performing Arts from Winchester University in Hampshire, England and a diploma in acting from The Barry John Acting Studio in Mumbai.[1] Her father is a businessman in UK and mother, a homemaker.[2] Career[edit] Her break in cinema came in 2014 with Mad About Dance showcasing her dancing skills. In April 2015, a British-Asian film featuring her, Amar Akbar & Tony, released in England.[5] She is playing one of the main roles with Sandhya Mridul, Tannishtha Chatterjee, Sarah-Jane Dias and Anushka Manchanda in a female-buddy film Angry Indian Goddesses, marking debut of Pan Nalin in mainstream Hindi cinema. 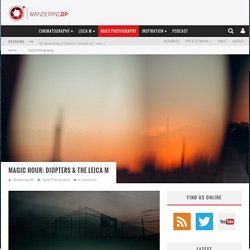 The size and design of the camera makes it really easy to take the camera wherever I go. The more I use the rangefinder the more comfortable I become with the system and the sensor. Diopters for Creative Purposes I have been experimenting with using diopters in my cinematography for a few years but I haven’t really mixed my Leica M work and diopters.

On a recent location scout for an upcoming cinematography project I had to take the diopters along to see how the locations would react to the process. It didn’t take many exposures before I really started enjoying using the Leica M and the diopters. Essentially what you do is you use the diopters to magnify (in most cases extremely over magnify) an area of the frame so that it either adds elements (color, light, shadow) or takes away elements by blurring or mixing layers. 1. 2. 3. To get the most out of the blur you need to manage your depth of field carefully. 4. 5. One Last Tip. Tiffen: Dfxv4 Video/Film Plug-in. Simulating 2,000+ popular award-winning Tiffen glass filters, specialized lenses, optical lab processes, film grain, exacting color correction, plus natural light and photographic effects, the Tiffen Dfx digital filter suite is the definitive set of digital optical filters for professional photographers, top motion picture filmmakers, video editors, and visual effects artists around the world. 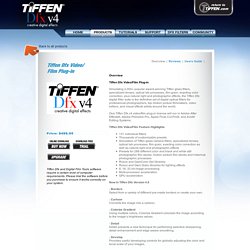 LEE Filters Diffusion Test — DON MCVEY. However, we found that adding fill with a 2nd light, and then trying to balance that with the amount each diff took out, was going to really slow us down. 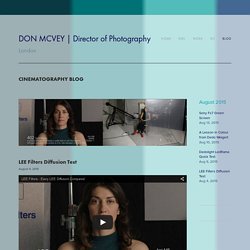 So we let some light spill onto the floor, which bounced back onto our model. Now, this presented me with a bit of a problem. Getting a very accurate light meter reading of how much each piece of diff took out. I sacrificed that accuracy for a couple of reasons. One is that you can find that info on the LEE Filters website. Chasing the Light: Photography and the Practice of Seeing - CGPersia Forums.