Raise borer. A raise borer is a machine used in underground mining, to excavate a circular hole between two levels of a mine without the use of explosives. 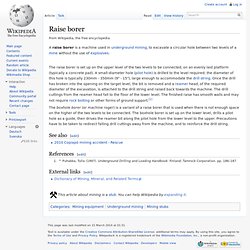 The raise borer is set up on the upper level of the two levels to be connected, on an evenly laid platform (typically a concrete pad). A small-diameter hole (pilot hole) is drilled to the level required; the diameter of this hole is typically 230mm - 350mm (9" - 15"), large enough to accommodate the drill string. Once the drill has broken into the opening on the target level, the bit is removed and a reamer head, of the required diameter of the excavation, is attached to the drill string and raised back towards the machine.

The drill cuttings from the reamer head fall to the floor of the lower level. The finished raise has smooth walls and may not require rock bolting or other forms of ground support.[1] See also[edit] 2010 Copiapó mining accident - Rescue References[edit] Jump up ^ Puhakka, Tulla (1997). External links[edit] Shaft mining. A plan-view schematic of a mine shaft showing cage and skip compartments. 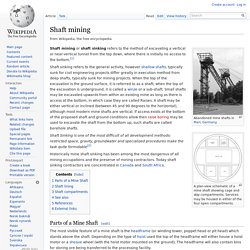 Services may be housed in either of the four open compartments. Shaft mining or shaft sinking refers to the method of excavating a vertical or near-vertical tunnel from the top down, where there is initially no access to the bottom.[1] Shaft Sinking is one of the most difficult of all development methods: restricted space, gravity, groundwater and specialized procedures make the task quite formidable[2] Historically mine shaft sinking has been among the most dangerous of all mining occupations and the preserve of mining contractors. Today shaft sinking contractors are concentrated in Canada and South Africa. Pit cave. A pit cave, or vertical cave—or often simply called a pit (in the US) or pot (in the UK)—is a type of natural cave which contains one or more significant vertical shafts rather than being predominantly a conventional horizontal cave passage. 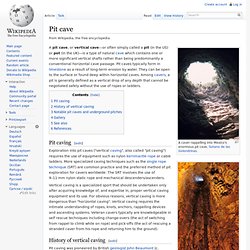 Pit caves typically form in limestone as a result of long-term erosion by water. They can be open to the surface or found deep within horizontal caves. Among cavers, a pit is generally defined as a vertical drop of any depth that cannot be negotiated safely without the use of ropes or ladders. Pit caving[edit] Exploration into pit caves ("vertical caving", also called "pit caving") requires the use of equipment such as nylon kernmantle rope or cable ladders. Vertical caving is a specialized sport that should be undertaken only after acquiring knowledge of, and expertise in, proper vertical caving equipment and its use. History of vertical caving[edit] Notable pit caves and underground pitches[edit]

Stoping. Sketch painting of miners stoping at the Burra Burra Mine, Burra, Australia, 1847. 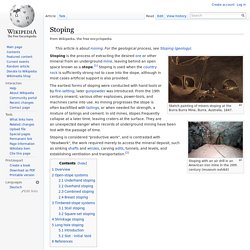 Stoping with an air drill in an American iron mine in the 20th century (museum exhibit) The earliest forms of stoping were conducted with hand tools or by fire-setting; later gunpowder was introduced. From the 19th century onward, various other explosives, power-tools, and machines came into use. Tunnel. A tunnel is an underground or underwater passageway, dug through the surrounding soil/earth/rock and enclosed except for entrance and exit, commonly at each end. 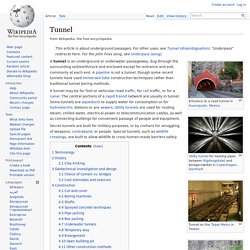 A pipeline is not a tunnel, though some recent tunnels have used immersed tube construction techniques rather than traditional tunnel boring methods. Secret tunnels are built for military purposes, or by civilians for smuggling of weapons, contraband, or people. Special tunnels, such as wildlife crossings, are built to allow wildlife to cross human-made barriers safely. Terminology[edit] A tunnel is relatively long and narrow; the length is often much greater than twice the diameter, although similar shorter excavations can be constructed such as cross passages between tunnels. The definition of what constitutes a tunnel can vary widely from source to source. Cologne sewerage system. The sewerage system of Cologne is part of the water infrastructure serving Cologne, Germany. 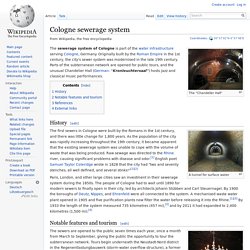 Originally built by the Roman Empire in the 1st century, the city's sewer system was modernised in the late 19th century. Parts of the subterranean network are opened for public tours, and the unusual Chandelier Hall (German: ''Kronleuchtersaal'') hosts jazz and classical music performances. History[edit] A tunnel for surface water. Damp (mining) Historically, gases (other than breathable air) in coal mines in Britain were collectively known as "damps". 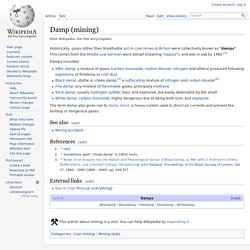 This comes from the Middle Low German word dampf (meaning "vapour"), and was in use by 1480.[1] Damps included: After damp, a mixture of gases (carbon monoxide, carbon dioxide, nitrogen and others) produced following explosions of firedamp or coal dustBlack damp, stythe or choke damp,[2] a suffocating mixture of nitrogen and carbon dioxide[3]Fire damp, any mixture of flammable gases, principally methaneStink damp, usually hydrogen sulfide; toxic and explosive, but easily detectable by the smellWhite damp, carbon monoxide, highly dangerous due to being both toxic and explosive The term damp also gives rise to damp sheet, a heavy curtain used to direct air currents and prevent the buildup of dangerous gases. Mining accident. Underground living. Underground living refers simply to living below the ground's surface, whether in naturally occurring caves or in built structures. 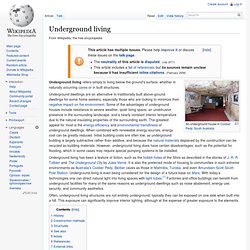 Underground dwellings are an alternative to traditionally built above-ground dwellings for some home seekers, especially those who are looking to minimize their negative impact on the environment. Some of the advantages of underground houses include resistance to severe weather, quiet living space, an unobtrusive presence in the surrounding landscape, and a nearly constant interior temperature due to the natural insulating properties of the surrounding earth. The greatest appeal for most is the energy efficiency and environmental friendliness of underground dwellings. When combined with renewable energy sources, energy cost can be greatly reduced. Initial building costs are often low, as underground building is largely subtractive rather than additive, and because the natural materials displaced by the construction can be recycled as building materials. Devil's Throat at Punta Sur. The Devil's Throat (Spanish: La Garganta del Diablo)[1] is an underwater cave formation near the island of Cozumel, Mexico, at Punta Sur in the Arrecifes de Cozumel National Park; it starts at approximately 80 feet (24 m) of depth and opens up at approximately 135 ft (41 m) - right at the edge of recreational dive limits. 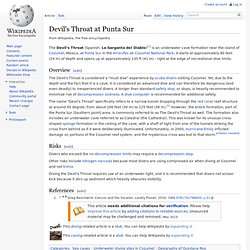 Overview[edit] The Devil's Throat is considered a "must dive" experience by scuba divers visiting Cozumel. Yet, due to the depth and the fact that it is a cave, it is considered an advanced dive and can therefore be dangerous (and even deadly) to inexperienced divers. A longer than standard safety stop, or stops, is heavily recommended to minimize risk of decompression sickness. A dive computer is recommended for additional safety. Storm drain. A storm drain, storm sewer (US), stormwater drain (Australia and New Zealand) or drainage well system (UK) or simply a drain or drain system is designed to drain excess rain and ground water from paved streets, parking lots, sidewalks, and roofs. 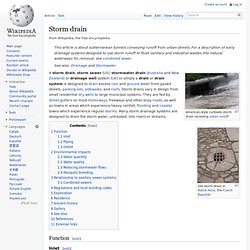 Storm drains vary in design from small residential dry wells to large municipal systems. They are fed by street gutters on most motorways, freeways and other busy roads, as well as towns in areas which experience heavy rainfall, flooding and coastal towns which experience regular storms. Many storm drainage systems are designed to drain the storm water, untreated, into rivers or streams. Function[edit] Inlet[edit] There are two main types of stormwater drain (storm sewer) inlets: side inlets and grated inlets. Many inlets have gratings or grids to prevent people, vehicles, large objects or debris from falling into the storm drain. Old German storm drain in Küstrin (now Kostrzyn nad Odrą in Poland) Davy lamp. A type of Davy lamp with apertures for gauging flame height The Davy lamp is a safety lamp for use in flammable atmospheres, consisting of a wick lamp with the flame enclosed inside a mesh screen.

It was invented in 1815[1] by Sir Humphry Davy. It originally burned a heavy vegetable oil. Paris sewers. The Parisian sewer system dates back to the year 1370 when the first underground system was constructed under "rue Montmartre". Since then, consecutive French governments have enlarged the system to cover the city's population. The Descent Part 2. The Descent Part 2 is a 2009 British adventure horror film and a sequel to the 2005 horror film The Descent. Chthonic. Some dictionaries, such as the OED, state that the first two letters should be pronounced (as /k/), /ˈkθɒnɪk/, while others, such as the AHD, record these letters as silent, /ˈθɒnɪk/. The modern pronunciation of the Greek word "χθόνιος" is [ˈxθonios],[2] although the Classical Greek pronunciation would have been [ktʰónios]. Chthonic and Olympian[edit] While terms such as "Earth deity" or Earth mother have sweeping implications in English, the words khthonie and khthonios had a more precise and technical meaning in Greek, referring primarily to the manner of offering sacrifices to the deity in question.